The Concordia University Alumni Association recognizes and honours the achievements of exceptional community members. Join us – in person — to celebrate our outstanding award recipients. 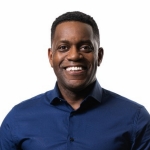 Sean Henry, BA 01, is an award-winning journalist and the host of Daybreak, CBC Montreal's weekday morning radio show. He joined CBC's Montreal newsroom in 2012 after seven years at CBC Windsor, where he regularly anchored for both CBC-TV and Radio, worked as a court reporter and video-journalist. One of the highlights of his time in Windsor was covering civil rights activist Rosa Parks' funeral in Detroit. Prior to moving to Windsor, Henry reported from the Quebec City courthouse and the National Assembly for Global Quebec. Henry has a bachelor’s degree in journalism from Concordia and a law certificate from Université de Montreal. He has a black belt in Brazilian Jiu-Jitsu, studies ballet and has trained in circus aerial silks and straps.

More Alumni events
Back to top