Smart on Drugs, Not War on Drugs // Screening + Panel Discussion 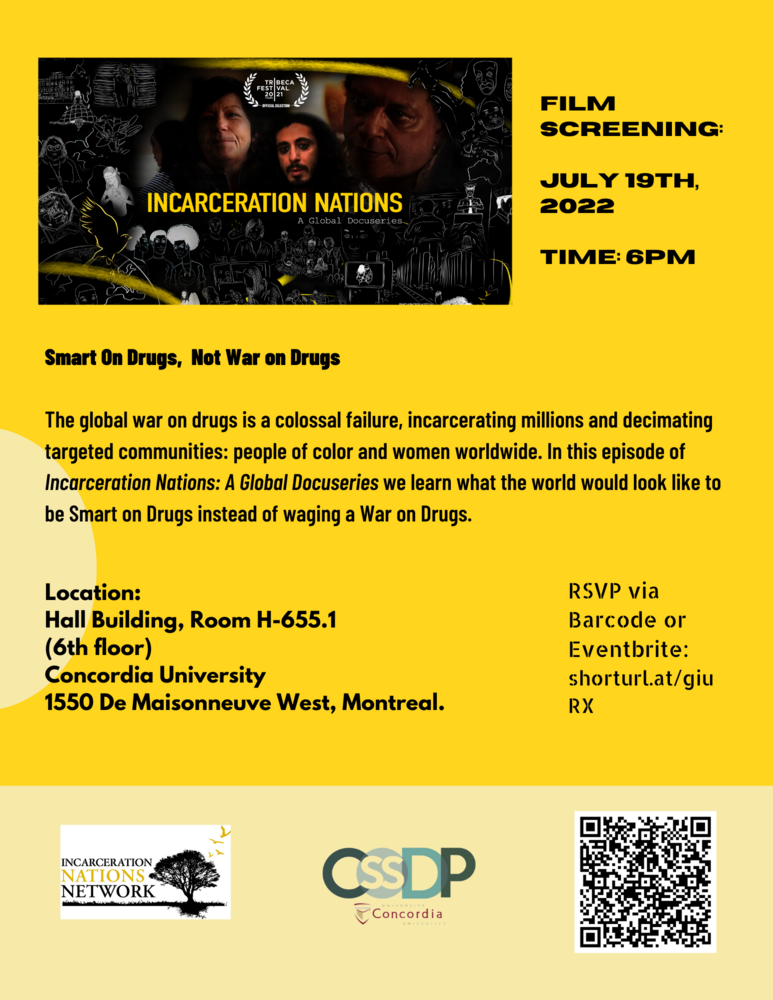 Join us for a documentary screening and panel discussion about drug policy and its effects on incarceration and human rights!

We are excited to announce the screening of Smart on Drugs, Not War on Drugs, a documentary that tells the story of the human impacts of the current global war on drugs and its effects on incarceration and human rights violations. The film compares drug policies around the world and highlights the importance of harm reduction and smarter drug policies.

Watch stories from people around the world, from Australia, Bolivia, Brazil, Canada, the Czech Republic, Ghana, Lebanon, Portugal, Switzerland, Taiwan, and the United States, which bring a broader perspective of how these countries are dealing with the drug-related policies and offenses.

The documentary is part of Incarceration Nations: a Global Docuseries, a 10-episode series of documentary films to educate viewers about global mass incarceration, and highlight the current unjust judicial systems and practices that affect people around the world.

After the screening, we will host a panel discussion to talk about the documentary, drug policy, and incarceration. Join us and bring your comments and questions!

Baz is the documentary director and Founding Executive Director of Incarceration Nations Network, a global network that promotes prison reform and justice reimagining worldwide; a professor at John Jay College of Criminal Justice, City University of NY; and the founder of John Jay's groundbreaking Prison-to-College Pipeline program, which provides university-level education and reentry assistance to incarcerated and formerly incarcerated people in New York. She is also the author of the book Incarceration Nations: a Journey to Justice in Prisons Around the World.

More panelists to be announced ...