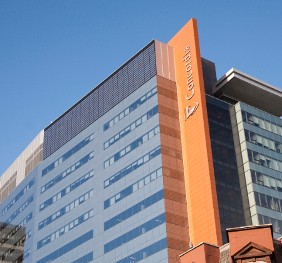 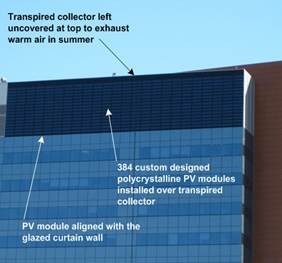 The John Molson School of Business (JMSB) building-integrated photovoltaic/thermal (BIPV/T) system is the first such system fully integrated with the building envelope, the HVAC system and the architecture of the building. The system consists of:

The BIPV/T façade is close to south-facing and directly in front of the building mechanical room, making this an optimal system because ducting length required to connect to the fresh air system is reduced. The 288 m² system generates solar electricity (up to 25 kilowatts) and solar heat (up to 75 kW of ventilation fresh air heating). A variable speed fan draws solar-heated air through the pores of the UTC cladding which account for a porosity of about 1%. At night, heat loss from the building is also partially recovered by the air plenum. Dark-framed PV modules are mounted directly against the UTC cladding, covering about 70% of the total surface. In addition to the electricity generation, heat is actively drawn from the back of the PV modules and the exposed UTC, contributing to heating the ventilation air, while cooling the panels. The system is currently being continuously monitored and peak combined solar energy utilization efficiencies of up to 55% have been measured.

This is essentially a living lab facility that will help educate the public, industry and our students. 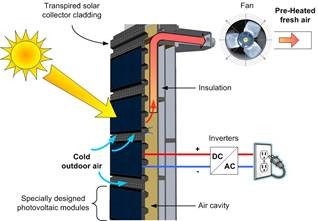 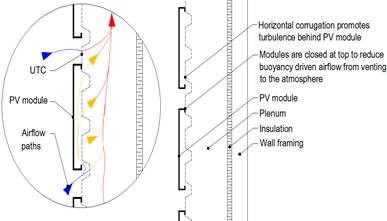 Attachment of PV modules, and airflow paths around the bottom frame of a PV module and into the transpired collector

A video about the BIPV/T installation on JMSB building at Concordia University, by Canada Foundation for Innovation, 2016 (in French).