Hour was one of four Montreal English and French weekly newspapers that covered the city’s thriving alternative and indie arts and music scenes for more than two decades.

Montreal’s cultural scene benefitted over many years from a classic newspaper war between the city’s four alternative weeklies, the Quebecor papers Mirror and Ici versus their crosstown rivals Hour and Voir, published by Communications Voir.

Those weeklies gave voice to the city’s burgeoning alternative and indie arts and music scenes, and championed such hot-button social issues as LGBTQ civil rights. They also launched the careers of many well-known writers and journalists.

It was at Hour where I began my 15-year column Three Dollar Bill, the only syndicated LGBTQ column in Canadian publishing history, now conserved at The Arquives in Toronto. I later became Hour’s editor-at-large.

All four weeklies are now long gone: Ici folded in 2009; Hour and Mirror — whose vicious rivalry was the stuff of legend — both shut down in 2012; and after being bought in 2015 by the Mishmash Média group the iconic French-language Voir killed its print edition in 2019 before its digital version ceased operations in 2020.

Then, in July 2021, I came across a social media post by Université du Québec à Montréal journalism professor Jean-Hugues Roy about his obtaining the Voir archives for UQAM. In his post he wrote, “Unfortunately we don’t have room for those of (Voir’s sister papers) Voir Québec, Voir Gatineau, Voir Estrie, Voir Mauricie and Voir Saguenay, as well as those of Hour and the Ottawa Express.”

Knowing those Hour archives are the only surviving complete set, I immediately emailed Mishmash Média administrative director Julie Duguay to ask if they would donate them to Concordia Library’s Special Collections. It was a perfect fit, I said: Hour provides a historic snapshot of Montreal from the early 1990s to the early 2010s, while Concordia is also home to one of Canada’s top journalism schools.

I was delighted when Duguay replied that another Concordia journalism grad, Peter Wheeland, BA 86 — the veteran journalist who gave me my start at Hour in 1995 when he was the paper’s news editor — had already approached her.

“Then Concordia journalism professor Paul Gott gave me a Concordia Library contact and thankfully they were not only interested but quite enthusiastic about taking the collection,” Wheeland says. “Mishmash transferred ownership of the volumes and Concordia sent a truck to pick them up.” 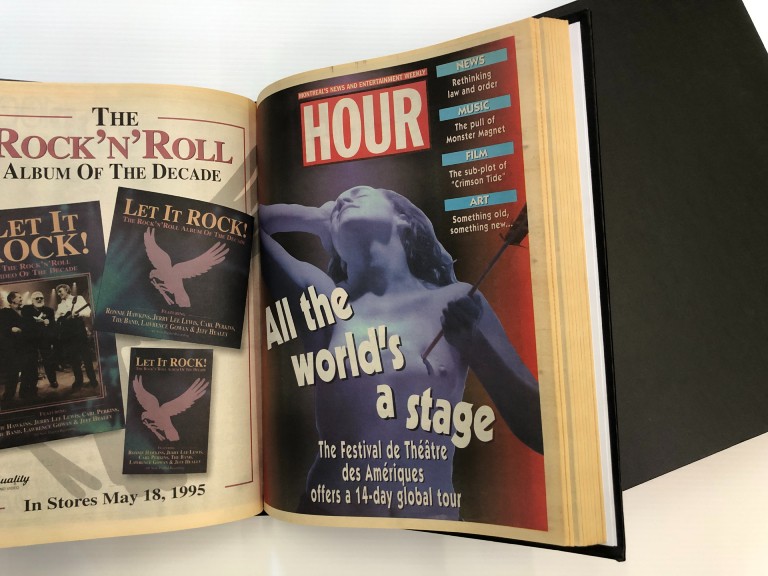 “It was quite evident to everyone I talked to that Hour would have a great home at Concordia,” says Alexandra Mills, special collections archivist at Concordia Library.

“Normally, acquisition proposals go through the Special Collections acquisition advisory committee, but in this case — since it’s just two titles, Hour and Hour Community, and we had the room — there was no convincing necessary. We were very happy to accept the donation because we recognize how important papers like Hour are in documenting the cultural history of a city.”

Over at Mishmash Média, Duguay is also thrilled Hour has found an “ideal” permanent home at Concordia. “This collection will ensure that future generations can research and discover the subjects and issues that connected young Montrealers during this era,” she says.

That Hour will be saved for posterity is of great comfort to veteran journalists and Hour alumni like Wheeland and me.

“I was just one person in a large team. Many people made very valuable contributions to Hour over the course of its existence,” he adds.

“We also forced the dailies to adapt and change. It’s sad there is no alternative print media in Montreal anymore, but I am happy Concordia will preserve Hour for future generations.”