It Comes in Waves touches on the precariousness of the health-care sector and what that means for workers in the midst of a global pandemic.

A team of Concordia researchers have released a video game prototype, It Comes in Waves, as part of a larger project on socioeconomics and gaming.

Mia Consalvo, professor of communication studies and Canada Research Chair in Game Studies and Design, is executive producer of the game prototype, which was made available January 24. The game is set during a global pandemic and deals with themes of social class.

“We collaborated on pretty much every element of the game — one of the great perks of working in a small team,” says Blamey, who is pursuing a PhD in communication studies. “One of my main tasks was fixing bugs as they arose in our builds. Another was editing down our narrative.”

Available on itch.io, It Comes in Waves follows the story of Beattie, an essential worker trying to stay safe while acting as a caregiver at two different facilities throughout the beginning of the pandemic.

“I learnt a lot during this project,” Blamey says. “I had worked in the Twine game engine before, but never to this degree. I learned a huge amount about the programming language as well as porting large works into the engine.”

Lucas, a game artist, game researcher and UX/UI designer, was mostly responsible for designing the artwork.

“This involved character design, background and environment design, as well as the open screen of the game and transitional screens,” she explains. “I had to develop a method to design characters and backgrounds quickly and effectively given that we had a considerable amount and I was the only artist on the team.” 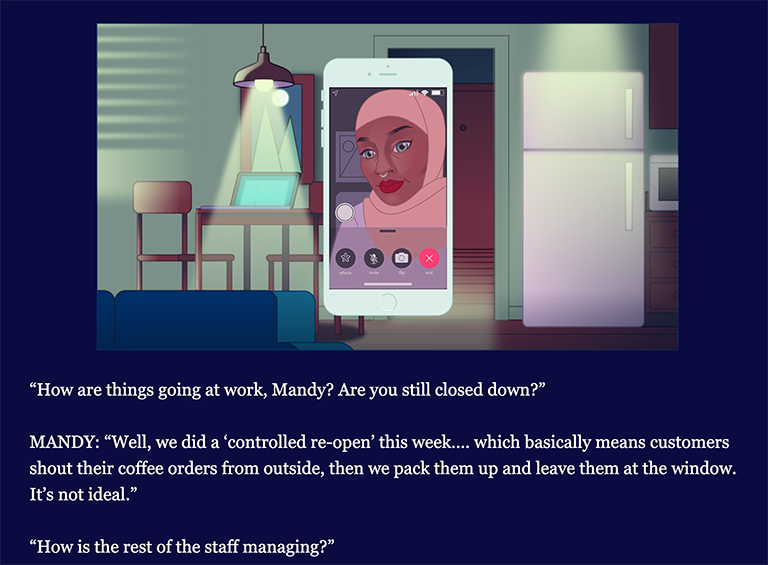 ‘Essential’ does not equal safe or well paid

In addition to their experiential learning through technical and artistic collaboration, the group’s overall aim for the project was to explore the role social class has played in the COVID-19 pandemic.

According to Consalvo, the research team was initially analyzing games to see how they depicted social class. When the pandemic started, they noticed that most people — except for so-called “essential workers” — were being told to work from home. Consalvo also noted that many were poorly paid service workers.

When Quebec headlines began to highlight the devastating conditions arising in nursing homes, Consalvo says she began to imagine a game that documented and explored the experiences of the workers in those types of facilities.

“Many people were locked inside, there were staff shortages and stories of neglect,” she says. “I wondered what it would be like to be a worker in such a facility, where you were concerned about the people you took care of, you couldn’t work from home, but you weren’t paid that well either.”

Consalvo says that ultimately It Comes in Waves is about two main ideas: “first, what it might be like to be a health-care worker in a pandemic; and second, what it’s like when you are also worried about money and probably unable to quit your job for something ‘safer.’” 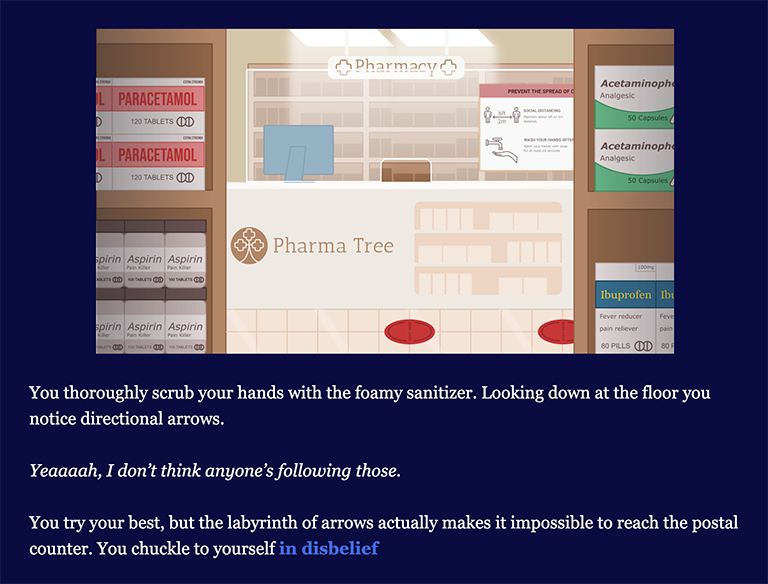 The game can’t replicate the experience of actually being an essential worker, yet Consalvo says the team still wanted to giving people a point of understanding about the daily impact and level of worry that can come with having such a job.

Blamey’s PhD dissertation focuses on the potential of games to communicate meaningful and emotional content to players. “I find that games provide a really potent site for players to explore their own morals, ethics and ideologies within the constructed game space,” she notes.

It Comes in Waves employs a choice-consequence system where the choices made by the players shape the rest of the story.

“I think that having this kind of game mechanics serves as a metaphor for the poor agency working-class people have in capitalism,” Lucas says. “I hope that the game makes people reflect on the value of agency and how much it varies depending on your position in society.”

Now that the game is available to play, the class and games research team has moved their focus to bringing It Comes in Waves to a wider audience through festivals and other events. The next phase of their research will examine the role of social class in the game industry and on game industry workers, as well as the intersection of players and social class.

“This project has been fascinating to conduct,” Consalvo says. “Lots of research has focused on other aspects of identity, including gender, sexuality, race, ethnicity, age and so on. But very little in either games or media studies has focused on class. It’s been eye-opening.”

Check out the Concordia-made game prototype It Comes in Waves and learn more about the Department of Communication Studies.