For too many women interested in pursuing careers in science, technology, engineering and math (STEM), it’s still a man’s world. Not only that: it’s also a man’s moon.

Bettina Forget is a Public Scholar and PhD candidate in art education in Concordia’s Faculty of Fine Arts. She is studying ways in which the arts and sciences can merge to encourage women to enter STEM fields. This includes astronomy, another discipline heavily dominated by men and whose early pioneers had the privilege of naming discoveries after themselves. As a result, says Forget, far more astronomical bodies bear the names of men than women.

This includes the craters on Earth’s moon: 1,578 of them have been named and catalogued, but only 32 — just 2 per cent — are named for women. And half of those are on the moon’s far side.

It was this discrepancy that inspired Forget to begin two related art projects: Women With Impact and One Small Step, about which she recently published an article in the journal Leonardo. Women With Impact is a series she began in 2016 of hand-drawn illustrations of the 32 craters named after women. Until recently it was on display at Montreal’s Planetarium. The drawings began with Forget sitting by her telescope and peering at individual craters and was completed using high-resolution photos of the lunar landscape taken by the Lunar Reconnaissance Orbiter.

“This is where science and aesthetics overlap,” she says. “The orbiter takes several passes while photographing these craters, so the shadowing is different each time. It allowed me to bring in some interpretation and to highlight what is characteristic of each crater. When you look at the finished product, it’s almost like a family portrait.” 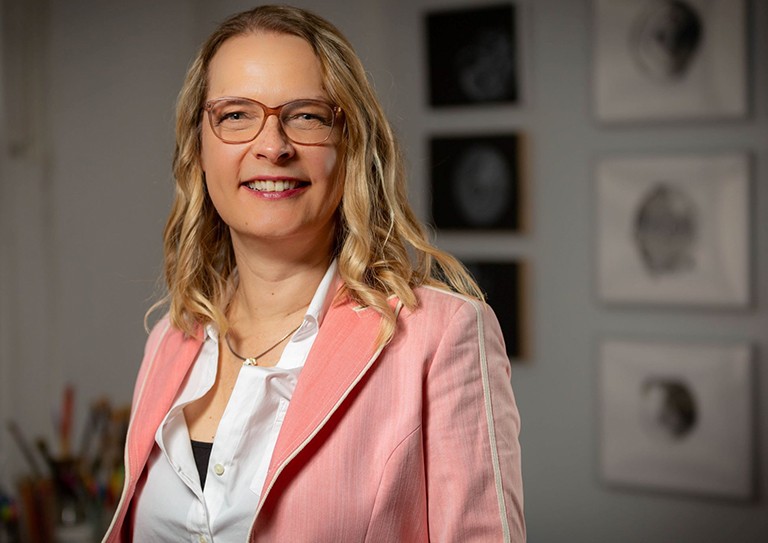 Filling in the holes

Her second project, One Small Step, brings the craters off the page and makes them tangible. Forget used her home 3D printer to create miniature replicas of the craters, each small enough to fit on the sole of a shoe.

Her project envisions female scientists strapping those 3D printouts onto the bottom of their shoe and performing meditative walks, leaving imprints of the craters in the ground behind them. Each participant would be given a set of instructions and a list of guiding questions for the walk, and they would document their walk and crater impressions using video and photography. Forget is an amateur astronomer, an artist working in the field of astrobiology, a former board member of the Royal Astronomical Society of Canada and director of the SETI Institute’s artist-in-residence program. She plans to approach women working in astrobiology, exoplanets and research on the search for extraterrestrial intelligence (SETI).

“I like the idea of holding a crater in my hand,” Forget says. “It is a void, so it speaks to the absence of women in the STEM field. But it also has this fun playfulness to it. One Small Step is also a play on words, referring of course to Neil Armstrong’s famous line about one small step for man,” — noting that no women have yet set foot on the moon.

The way she sees it, the moon reflects more than sunlight.

“It also reflects us, our aspirations and our thoughts and attitudes. So it’s all about the guys right now. And women just have to muscle in.”

Read the cited paper: “Women With Impact: Taking One Small Step into the Universe.”