Concordians receive 15 META nominations for their contributions to theatre

Sophie El Assaad received nominations for her work in The Water Chronicles, Chattermarks (pictured above) and Small Mouth Sounds.

With over 15 nominations this year, Concordians are once again well represented at the Montreal English Theatre Awards (METAs). Actor Stephen Booth and designer Sophie El Assaad are the two most nominated alumni at the gala. Both are graduates from Concordia’s Department of Theatre.

The METAs will exceptionally be held online this year on November 29. 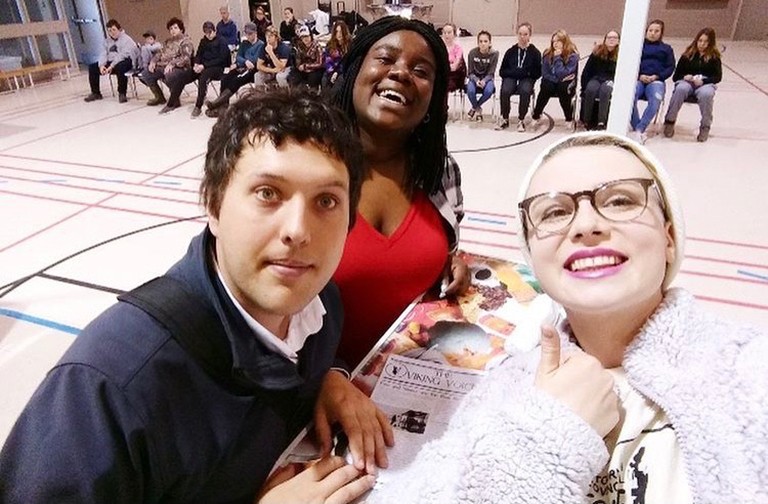 Stephen Booth (left) received two acting nominations for his performance in Fear of Missing Out.

Actor and writer Stephen Booth has an increasingly important place in the Montreal English-language theatre community. After performing on stage for the first time at the Fringe Festival in 2018 with The Autism Monologues, he participated in Fear of Missing Out, the play he is nominated for.

He had been touring the production with the Geordie Theatre for seven months when he had to abruptly stop last winter due to social-distancing measures.

“The play was a good opportunity to show what I personally have to deal with — what I had never seen on stage before,” he says. Indeed, Fear of Missing Out  sensitized its young audience to issues relating to sexual assault and consent, and depicted a character on the autism spectrum, played by Booth.

On the autism spectrum himself, the actor was involved in the project’s creation process early on and has been pleased by the very positive reactions to the play and to his character throughout the tour.

Meanwhile, Sophie El Assaad works on several fronts, pursuing her own plays while collaborating with various stage directors on set and costume design. Along with the three METAs already under her belt — Emerging Artist (2017) and Outstanding Costume Design (2017 and 2018) — El Assaad has produced two plays, Vanitas (2015) and Black Balloon (2018) under the umbrella of her own company, Nuaj.

“It brought theatre to the communities directly. It was great to bring art to people that way,” El Assaad says.

While Booth and El Assaad stopped performing live last spring, they have used the last few months to embark on new projects, perfect their craft and solidify their place in the Montreal theatre milieu.

As one of the most-sought costume artists in Montreal, El Assaad is not only working to keep touring with her current projects but is also learning new practices and technologies, making the most of her time at home these days.

“These last months have pushed me to write more and gave me new ideas on how to adapt my practice,” she says.

“A lot of theatre artists are pushing to film some of their work. I know we’re all live artists, but it could also be interesting to explore new avenues at the same time, to think of a new genre,” she adds.

Booth has also been writing more. “I was just commissioned to write a show that should be presented live next year,” he says. Booth couldn’t say too much about the project but asserted that the last few months didn’t stop his creative work.

“So many members of the English-language theatre community are from Concordia, either alumni or professors,” notes El Assaad. “My first real opportunity, on the professional side, was with Repercussion Theatre, with the artistic director Amanda Kellock (BFA 03). I owe so much to her.”

Learn more about other Concordia nominees at the ceremony.