Mathieu Grenier: “I am attempting to measure the wavelength of an image and the oscillation of its ‘feedback.’” | Mathieu Grenier, Don’t protect me from all that noise, 2020

It’s been eight years since Concordia’s Leonard and Bina Ellen Art Gallery launched its SIGHTINGS satellite exhibition cube in the Henry F. Hall Building. But the current edition of the show is the first to go strictly virtual.

The program was originally conceived as an experimental platform to critically reflect upon the possibilities and limitations of the modernist “white cube.” The gallery invites artists and curators to develop projects for a cubic display unit located on the Hall Building's ground floor, with the aim of generating new strategies for art dissemination.

In the context of the COVID-19 pandemic, SIGHTINGS 30 is taking place outside the limits of the cube to instead unfold online in response to the stakes of the cube, itself reformatted as an open and virtual site. The program is curated by Julia Eilers Smith, Max Stern Curator of Research.

Don’t Protect Me From All That Noise uses a selection of photographs and text excerpts from the archives of artist Mathieu Grenier to address the notion of the photographic in the digital realm.

“The images are from a series of random shots that I had filed away until they could be presented,” Grenier says. The program’s photographs capture everything from an old TV wrapped in Snoopy sheets abandoned on the street to various grainy and distorted screenshots.

“The title alludes to noise, disruption, deviation, bifurcation: phenomena that to my mind allude to interference — the kind that not only prevents proper signal reception but also reveals the existence of an underlying system.” 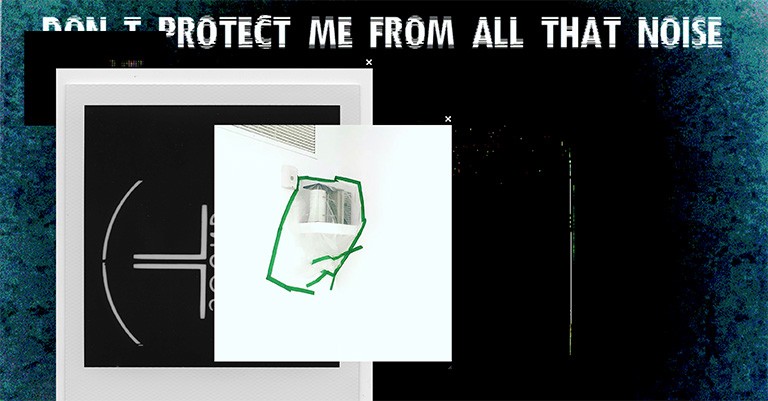 Grenier: “Our relationship to the world becomes both disembodied and amplified by this accumulation of digital content and mediums.” | Mathieu Grenier, Don’t protect me from all that noise, 2020

The screen as a primary site of exchange

For Grenier, a virtual space is one where we can project ourselves, a vortex that consumes us, a grid that fragments us.

“In it, we represent an often-idealized reality that reflects, a priori, a concrete and sensitive experience of the world. Our relationship to the world becomes both disembodied and amplified by this accumulation of digital content and mediums.”

He also points out that we now use images more than ever to communicate, and the screen is the primary site of these exchanges.

“I am attempting to measure the wavelength of an image and the oscillation of its ‘feedback.’ In other words, how we become exposed to an image, how it moves us and how we respond to it.”

Born in Black Lake, Quebec, Grenier now lives and works in Montreal. He holds an MFA in Studio Art – Photography and Media from the University of Texas in Austin and a BFA in Visual Arts and Media from UQAM. His interests are centred on the typology of images and their potential for representation. He creates photo-based installations that draw from a multiplicity of display strategies to address the photographic space as a site of affect.

The artist’s focus on the idea of noise grew out of his interest in the flow of information — and disinformation.

“In cybernetics, noise is defined as a form of interference in communication signals,” Grenier explains. “It is also, in some way, a natural form of resistance. When a signal is sent, the interference that prevents its proper reception and decoding is identified as noise — a sound, or a multitude of unharmonious sounds that hinder the clarity of a message.”

In analogue images, noise can be interpreted as film grain in photography, for example. In digital imagery, it appears similarly, but in the form of colour or black and white pixels.

On a larger scale, noise can partially or completely alter a signal, causing new textures, forms and colours to appear.

He emphasizes that, essentially, noise can be a way to resist or tamper with the dominant signal or subvert it as a way to control its reception — an idea that seems particularly relevant in the current era.

“A rumour can be noise. So can widespread news,” Grenier says. “Someone told me that there was a lot of noise on the stock exchange right now, and that the COVID-19 pandemic was making it hard to identify stock market trends. Protest movements also make a lot of noise; they disrupt the bandwidth of the dominant structure.”