Drones could be the new first line of defence against forest fires, says Concordia researcher

Youmin Zhang: “We want to use drones to provide solutions in an environment that may be dangerous to humans.” | Photo by Jason Blackeye on Unsplash

Quebec’s forest fire season has already begun, and with summers getting longer and hotter than ever before, controlling giant wilderness infernos will be a daunting challenge.

However, Youmin Zhang, a professor at the Gina Cody School of Engineering and Computer Science in the Department of Mechanical, Industrial and Aerospace Engineering and the Concordia Institute of Aerospace Design & Innovation,  believes there is a way to make the job easier and much cheaper.

In a paper he delivered at the 3rd International Symposium on Autonomous Systems, Zhang outlines the ways unmanned aerial vehicles (UAVs) — popularly known as drones — have been used to detect and monitor forest fires. He suggests how they can be used going forward to improve on more traditional methods such as watchtowers, satellite imagery, human-piloted flight patrols and human-walking patrols.

Zhang and his co-authors, Anim Hossain and Chi Yuan, both his students, point out that UAVs are not susceptible to the shortcomings found in other methods. Temperature and smoke sensors need to be relatively close to a fire to detect it; watchtowers have limited visibility and have a high false alarm rate; satellites cannot continuously monitor one location; and human pilots can, after hours in the air looking at forest canopy, simply get bored. None of these methods can provide constant, real-time monitoring efforts that can help firefighters. 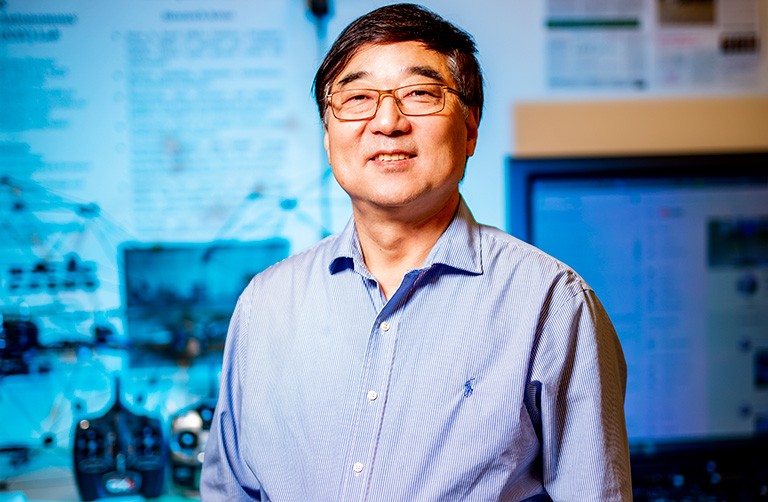 Youmin Zhang is a professor at the Gina Cody School of Engineering and Computer Science.

“Basically we want to use drones to provide solutions in an environment that may be dangerous to humans or very tedious,” Zhang says.

The system would require a permanently airborne fleet of drones patrolling pre-programmed flight paths around or near areas that are believed to be fire-prone. Using historical data provided by agencies like Natural Resources Canada, the drones, equipped with sophisticated optoelectronic technology, would capture visual or infrared images. These can be either automatically processed on board or sent to a human-supervised ground station for identification and, ideally, automatic identification with the software being developed. A ground-based human would generally oversee the coordination of any response required.

If the presence of a fire is confirmed, nearby firefighting authorities can be contacted via smart phone alert. Thanks to the information gathered by the UAVs on-board technology, the alarm sent by the UAV agent can also include crucial information like the size and location of the blaze.

Zhang and his team are also developing algorithms that would help the UAVs track blazes and predict where they might spread. This is still a relatively young field, though some models, using visual or infrared cameras, have achieved a high level of accuracy in predicting fire behaviour in different conditions.

Still, the authors warn that much work remains to be done.

By maturing these algorithms through future rigorous testing, Zhang and his colleagues think that a robust and reliable UAV forest fire monitoring system may very well be the next step in more effective, and safer, prevention programs.