Congenital limb malformation will not stop Japanese macaques from grooming each other, according to a new study
|
By Patrick Lejtenyi

Photo by Steven Diaz on Unsplash

Primatologists — and a lot of animal lovers — are already aware of the significance of grooming in many monkey species. The behaviour is important for hygiene and relaxation: it removes louse eggs and provides a soothing caress and social bonding between groomee and groomer.

However, typical grooming requires digital dexterity. What happens when a monkey lacks fingers on her hand? Does this prevent her from performing regular monkey behaviour?

As it happens, no, it does not. In a new paper published in the journal PLOS One, Concordia researchers look at the grooming techniques of Japanese macaques born with congenital limb malformations. Jenny Paola Espitia-Contreras (BSc 19) authored the study with her undergraduate honours research supervisor, Sarah Turner, assistant professor of geography, planning and environment in the Faculty of Arts and Science. Linda Fedigan at the University of Calgary was also a co-author.

They found that while the macaques born with malformations are less efficient groomers, the social component of the behaviour is not affected. In other words, they can still provide the soothing, bonding effects of grooming if they are missing fingers or even hands. 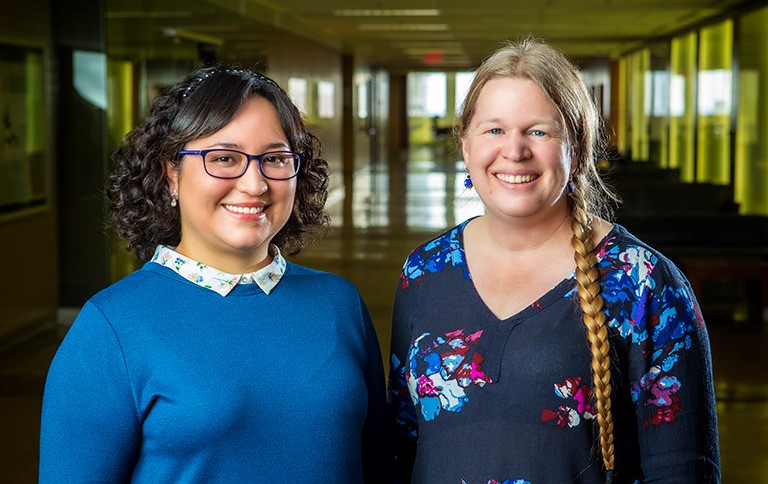 Many ways to catch an egg

Turner has been studying the same population of roughly 400 macaques at the Awajishima Monkey Center on Awaji Island in southern Japan since 1999. About 17 per cent of the censused monkeys were born with a limb malformation, ranging from missing a finger to missing both hands. The cause of these impairments is unknown, but it may be due to the isolated population’s limited gene pool and the presence of pesticides in their food and environment.

Using video filmed by Turner and field assistants during the assistant professor’s PhD research in 2007, Espitia-Contreras closely examined the macaques’ grooming patterns. She focused on a group of 27 females, 11 of whom were born with malformed limbs.

“I started to compare the disabled and non-disabled grooming techniques and noticed how they differed,” says Espitia-Contreras, who is currently working on her master’s in environmental assessment at Concordia.

Building on existing work by other researchers, she identified four sequential grooming stages: finding the louse egg, gripping the egg, carrying egg to mouth and eating the removed egg. She continued by breaking down observed movements in each stage, again finding different movements in disabled and non-disabled populations.

“Depending on the degree of impairment, their movements would change or adjust,” Espitia-Contreras says. For instance, monkeys lacking fingers would pinch the egg between their thumbs and remove the egg with two hands, while non-disabled monkeys would usually just use fingers on one hand. Disabled monkeys were also more likely to use their mouths to remove eggs.

A touch is a touch

The researchers noted that the disabled monkeys were less efficient in removing louse eggs than their non-disabled counterparts, but they did use the same number of movements. Disabled monkeys removed fewer eggs, but their participation in grooming was helpful in other ways.

“The experience of being groomed by a disabled monkey is probably quite similar,” Turner notes. “They were fulfilling the grooming social function and compensating socially for their physical impairments even though they were not removing the same number of ectoparasites. They are less efficient but they are not excluded because of it.”

Turner notes that there was no statistical difference between disabled and non-disabled macaques regarding choice of grooming partner. Monkeys were as likely to choose a disabled partner as a non-disabled one.

Turner says these findings show that the monkeys can modify their behaviour with challenging circumstances — a trait especially important to surviving in a time of a changing climate.

“Monkeys with disabilities are essentially pushed to have to figure out ways of behaving flexibly,” Turner explains. “They find ways of participating in grooming and that shows resiliency.”