Jochen Jaeger: “Having connections across or under a highway is important, but we first should think about ways to reduce the number of animals getting killed on the road.” | Photo by Erik Mclean, Unsplash

Most motorists pay little attention to the amount of roadkill they drive over or past on the highway, except when swerving to avoid it.

But odds are the number of dead animals they encounter is far higher than they think. And it will likely rise globally due to increasing road construction and traffic volumes if humans don’t install measures to prevent woodland animals from wandering onto busy roads in the first place.

Jochen Jaeger is an associate professor in the Department of Geography, Planning and Environment at Concordia. He recently oversaw a study that measured the effectiveness of underground passageways that would let fauna cross the highway safely, and if road mortality levels are lower in road sections with fences and wildlife passages in place than in road sections where no such safety measures exist.

The paper, published in the Journal of Environmental Management, was co-authored with Judith Plante (MA 16) and André Desrochers from the Université Laval (Quebec City). It examined a stretch of the widened Highway 175 between Quebec City and the Saguenay region, much of it in the Réserve faunique des Laurentides and alongside the Parc national de la Jacques-Cartier. Between 2006 and 2012, the Ministry of Transport broadened the two-lane highway into a four-lane dual carriageway, with a median between the road surfaces.

The expanded highway presented a risky landscape for the wildlife living alongside and travelling over it. In order to mitigate animal mortality and the barrier effect of the road, the ministry built 33 wildlife underpasses over a 68-km section. Alongside each underpass opening were 200-metre-long fences.

The hope was that the underpasses, coupled with the fences, would induce small and medium-sized animals to cross underneath the highway rather than over it. Other jurisdictions have used fences and underpasses for this group of animals, but Jaeger says the Highway 175 project was basically the first to use them in Quebec, which he thinks is a laudable step in the right direction. 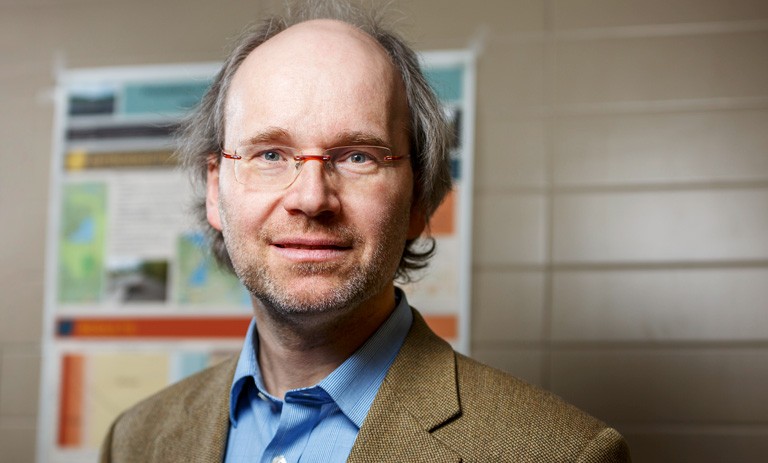 Jochen Jaeger, associate professor in the Department of Geography, Planning and Environment.

To find out how effective these fences and underpasses were in preventing the deaths of small and medium-sized animals, Jaeger’s team of students had to first see how many carcasses they would count on the road.

Over the course of four summers, from 2012 to 2015, they would drive nearly daily along the 68-km stretch of highway (in both directions) and count the number of dead animals they saw. They found a lot, Jaeger says, especially porcupines, but also raccoons, red foxes, skunks, snowshoe hares, squirrels, woodchucks, a few beavers, even two lynx, and many more small mammals like mice and shrews.

They counted close to 900 bodies in all, though Jaeger believes the actual number of dead animals is significantly higher.

To find out how many animals go undetected, Plante estimated detection probability by comparing the results of two search teams that worked the road independently for several months. She found that the spotter teams counted only 82 per cent of medium-sized animals. For smaller critters, the detection probability was much lower. The data showed that the observers counted only 17 per cent of the total small mammals dead. In addition, an unknown number of injured animals are thought to have wandered off the highway to die along the side of the road.

According to Plante, the study’s lead author who now works for a Montreal-based environmental consulting firm, “Most people don’t notice how much roadkill there is on the road. My eyes are so used to counting them now that I can spot bodies easily. Most drivers miss so much they don’t realize how big the problem is.”

But as striking as those numbers were, Jaeger says he was even more interested in where the bodies were found.

“We found that road mortality was highest at the fence ends, which indicates that some of the animals walked away from the underpass and along the fence to look for an opening. When they found one at the end of the fence, they would attempt to cross the highway and some of them would be killed. This indicates that the fences would need to be longer to discourage animals from moving along them and to meet the target of reduced road mortality.”

Plante says that another possible factor affecting the choices of animals in where to make an attempt to cross is the vegetation growing between the roads, which gives animals an illusion of safety. They will run the risk of crossing the first two busy lanes of road to reach the green patches only to find themselves in the same predicament of having to cross another two lanes.

Jaeger notes that this is not the first study to look at the effect exclusion fences have on the road mortality of mammals. It is, however, the first to look at the “fence-end” effect for medium-sized mammals and smaller.

“Transport ministries mainly care about larger animals like moose and bears because they cause accidents, while small and medium-sized animals usually don’t, unless a driver swerves to avoid them,” he says.

Animals are going to cross highways one way or another, Jaeger adds. It is in their nature to move across the landscape in search for food, for a mate or for a new territory. The responsibility for humans is to reduce the impacts of roads and traffic on wildlife populations by making those crossings safer. So many porcupines have been killed along the new Highway 175, for instance, that he fears the population in the proximity of the highway could be permanently affected. Porcupines have a very low reproductive rate, much lower than other mammal species of this size: A couple has only one offspring — called a porcupette — per year.

In order to ensure stable and healthy wildlife populations, future highway designers should integrate measures like fences with underpasses, and sometimes overpasses as well. The identification of roadkill hotspots can help determine where to put the fences and wildlife passages most effectively.

“Having connections across or under a highway is important, but we first and more urgently should think about ways to reduce the numbers of animals getting killed on the road,” Jaeger says. The number of roads on the planet is rapidly increasing. Quite a few of the new roads will affect biodiversity hotspots.

With the incipient sixth mass extinction event caused by human activities under way, the task of proper road mitigation is crucial in order to preserve biodiversity, and particularly so in the remaining biodiversity hotspots. The results of the study can help improve the design and placement of mitigation measures and therefore are relevant far beyond Quebec.

Read the cited paper: How do landscape context and fences influence roadkill locations of small and medium-sized mammals?