‘A dedicated champion of our university’: Concordia mourns the loss of L. Jacques Ménard

Businessman and Concordia chancellor emeritus L. Jacques Ménard, BComm 67, LLD 06, passed away on February 4, 2020, in Montreal. He was 74.

Ménard was president of BMO Financial Group, Quebec, from 2001 to 2018, and was named president emeritus in April 2018. He was also a director at many businesses and non-profit organizations, including WestJet, Claridge Inc., Stingray Digital, the Montreal Symphony Orchestra and the Macdonald Stewart Foundation.

“We are deeply saddened by the loss of a dedicated champion of our university and an accomplished member of Quebec’s business and philanthropic communities,” says Concordia President Graham Carr.

“He was a visionary leader who embraced our city and advocated for the betterment of society. Jacques was an extraordinary graduate of Concordia and a great supporter of the university. I will miss his joie de vivre and his company. He was a wonderful man.”

A banker for over 40 years, Ménard also served as chairman of the board of Hydro-Quebec, the Montreal Exchange, Trans-Canada Options Corporation and the Investment Dealers Association.

Ménard wrote three books aimed at inspiring young people. He campaigned to lower the dropout rate in Quebec, notably as co-president of the Groupe d’action sur la persévérance et la réussite scolaires. He was chairman of Youth Fusion and honorary chairman of EPOC Montreal, two organizations dedicated to helping students stay in school and receive the training they need to thrive.

Concordia has been an important beneficiary of Ménard’s long-time advocacy on behalf of education. He joined the Board of Governors in 1994 and played a crucial role in the university’s Campaign for a New Millennium, 1996-99. He was appointed deputy chancellor in 2009 and served as chancellor from 2010 to 2014.

"Jacques Ménard was always ready to stand behind his alma mater. We are truly grateful for his generosity, service and the example he set for others," says Paul Chesser, Concordia’s vice-president of Advancement.

Ménard also sat on advisory boards and task forces at other universities, among them HEC Montréal and York University’s Glendon College.

The press and others frequently sought his opinion on economic subjects. As vice-chair of the Canadian Task Force on Financial Literacy, he presented the group’s findings to the federal government in 2010 in the report Canadians and Their Money: Building a Brighter Future.

Ménard worked with the Boston Consulting Group on a study called Building a New Momentum in Montreal, which resulted in an urban renewal project — Je vois MTL, which later became Je fais MTL — launched in 2014.

Born in Chicoutimi, Que, his lifelong attachment was to Montreal, where he lived since childhood. Becoming chairman of Montreal International in 2014, he helped gather hundreds of local partners to attract foreign investment to the city. In 2016, Montreal attracted a record $1.35 billion in investment, a 35-per-cent increase over the year before, according to the organization.

Ménard was proud to involve BMO in Montreal’s 375th anniversary celebrations in 2017.

Ménard’s love of sports was displayed by his contribution to the local sports scene. As chairman of the Montreal Expos baseball club in the 1990s, he dedicated much effort to keeping the team in the city. Since its departure in 2004, he continued to publicly discuss the possibility of a new Montreal professional baseball team. He served as president of the Ordre des jeux du Québec in 1994 and was also a director of the Montreal Alouettes.

Furthermore, Ménard made great contributions in the field of health. He co-chaired a fundraising campaign for Sainte-Justine’s Hospital Foundation and later served as governor of that organization. The Montreal Heart Institute awarded him a Medal of Honour for his work in advancing the hospital.

In 2004, the Quebec government appointed Ménard chair of the Task Force on the Sustainability of the Quebec Health Care and Social Services System, which presented the Ménard Report on the financial stability of the provincial health program in 2005.

‘A man for others’

In an interview with Le Devoir in 2015, Ménard said, “As citizens, we are used to hearing that we have rights. I also like to think that we have duties that come with those rights.”

Ménard embodied the Jesuit motto, “a man for others,” of his alma mater, Loyola College, one of Concordia’s founding institutions. He attributed his passion for charitable work and philanthropy to his Catholic education and his experience as a scout in his youth, as well as a conscious decision to help others.

His efforts and achievements have been recognized by several private organizations and all three levels of government. 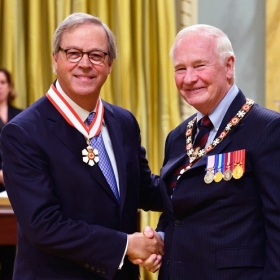 L. Jacques Ménard, pictured with Governor General David Johnston, was promoted to Companion of the Order of Canada in 2006.

Ménard was awarded the highest level of the Order of Canada, Companion, and received the Queen Elizabeth II Diamond Jubilee Medal in 2012. He was a Commander of the Ordre de Montréal and in June 2017 was promoted to the rank of Grand Officer, the highest honour of the National Order of Quebec, for his exceptional contribution to Quebec’s prosperity and wealth of expertise.

In 2014, Les Affaires named him the Quebec CEO most involved in the community. In 2015, he received the inaugural Marcel Côté Award for Leadership in Public Policy from the Public Policy Forum of Canada. The same year, he was inducted into the Canadian Investment Industry Association’s Hall of Fame.

Concordia recognized his achievements with an Award of Distinction from the John Molson School of Business in 1993, the Loyola Medal in 1999 and an honorary doctorate in 2006. He also held honorary degrees from several other universities.

In addition to his Concordia degrees, Ménard earned a bachelor’s degree from Collège Ste-Marie, now part of Université du Québec à Montréal, and an MBA from the University of Western Ontario, now Western University.

Despite his remarkable accomplishments, Ménard remained modest, attributing his success in part to chance. In 2013, he told Les Affaires, “I embraced a career that married well with what I loved to do as a citizen, on a human level.”

Ménard is survived by his wife, Marie-José Ratelle, their two children, Louis-Simon and Anne-Valérie, and two grandchildren.