Students in Cristina Iovita‘s theatre course are getting more than grades for their work this term — they are reviving Il Campiello, an 18th-century Italian play by Carlo Goldoni.

The production involves 22 students from across Concordia’s Department of Theatre, 11 of whom act in the play. Among those involved behind the scenes are assistant director Brooklyn Melnyk and stage manager Brianna Bagshaw-Stocks.

Tickets are sold out for all Il Campiello shows, which run from November 19 to 23 at the St. Jax Centre in Montreal.

‘It was the perfect play for actors-in-training’

Actor Petro Chionis was very grateful for his role.

“I couldn’t have imagined doing another play,” he says. “It challenges actors in a good way, both creatively and intellectually. It allows actors to make choices but also to think about the intentions of those choices at the same time. It was the perfect play for actors-in-training.”

Il Campiello is set in 18th-century Venice in a small piazza. It depicts various scenes of the daily lives of its poor inhabitants, who delve into various games and gossip between one another.

Iovita, who is an assistant professor of theatre, considers Goldoni’s play to be one of the best recent examples of a commedia dell’arte play.

Commedia dell’arte is a form of theatre that originated in 16th-century Italy. It uses masks and exaggerated movements to represent typical characters or social types that are specific to the style that comes back, in various ways, in all commedia plays. This form of theatre is known for making use of humour, talking about sex, love, jealousy and old age, and serving as social commentary.

Although no characters in this version of Il Campiello clearly identify in the text as characters typical of commedia dell’arte, some embody them metaphorically. Harlequin, Columbina and Zanni are a few examples audiences can watch out for. 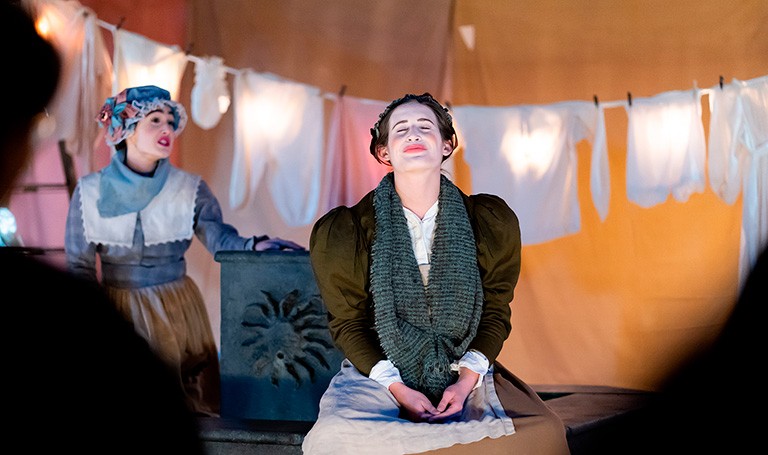 “The objective of the course was for students to acquire knowledge about a particular style, and this year, I wanted it to be commedia,” explains Iovita. “I thought this play would be very motivating and inspirational for students, but also simple to put together and to understand.”

Chionis, who depicts the characters of Anzoletto and Sansuga, points out that playing is essential when it comes to commedia dell’arte.

“I had to let go of feeling nervous and insecure about looking silly and really focus on my character’s intention and objective.”

Iovita says Il Campiello also allows students to better understand improvisation and physicality. Inspired by Goldoni’s approach to writing, students had to learn about their characters through improvisation workshops before they started working with the text. Most of the original script of the play is said to have been improvised before it was put on paper.

Christopher Fequet is a third-year student who plays the role of Fabrizio. “What I find interesting is that a lot of the improvising that took place has become the essence of the character, based off the traits that arose through that process,” he says.

“Once we found the essential embodiment of the character, improvisation was essential to keep playing with the characters, and to what happened within the confines of the show.” 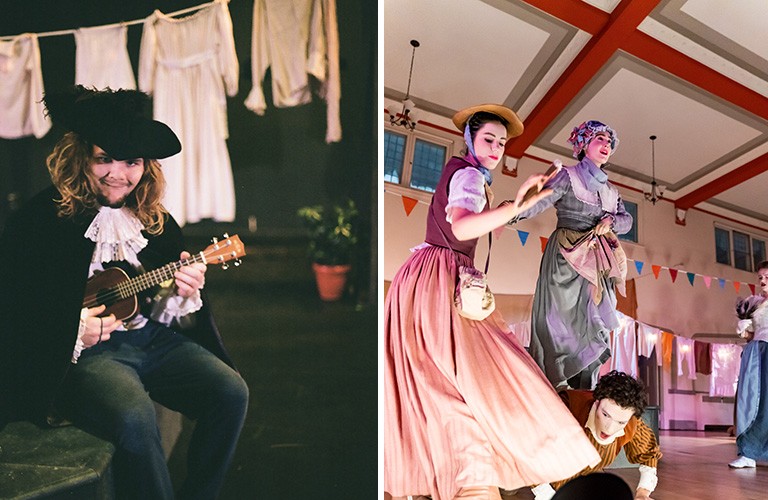 ‘A simulation of the professional theatre milieu’

Iovita wanted her students to learn what it means to be an actor and to work in theatre.

“They came to understand how to work with very little money, with minimalist means. They learned that by using only their bodies and a few musical instruments, everything is possible,” she says.

For many of the students in the class, this play will serve as their first real onstage experience.

“The course works like a simulation of the professional theatre milieu,” Iovita adds. “During rehearsal, students learned how to combine their learning of movement with their courses in interpretation.”

Most of the students participating in Il Campiello are enrolled in the Specialization in Acting for the Theatre. The play counts as three of nine mandatory credits they have to acquire in putting a play together and presenting it onstage.

“I would take this course again. It showed me the joy in making fun of the absurdity of life,” says Kaylen Mackenzie, who plays Orsola. “The passion and joy that Cristina has taught her students is irreplaceable.”

Find out more about Concordia's Department of Theatre.