Wouldn’t it be nice to know that the same gust of wind ruining your new hairdo was powering the lights in your office? Or that the same force of nature swirling masses of paper and dust and grit around at street level is keeping a hospital fully functional, or powering a subway system?

It’s a far-fetched idea, at least for now. But Ted Stathopoulos, a professor in the Department of Building, Civil and Environmental Engineering at Concordia, believes that someday we’ll be able to generate a substantial amount of electricity using wind turbines built directly into city buildings.

Stathopoulos provides an overview of the ways cities can harness the wind, and the substantial progress that has been made in that regard, in a paper published in the August 2018 edition of the Journal of Wind Engineering and Industrial Aerodynamics.

The article is co-authored by graduate students Hatem Alrawashdeh and Aierken Dilimulati and Stathopoulos’s Concordia colleagues Marius Paraschivoiu and Pragasen Pillay, as well as academics in Europe and Jordan.

The paper, Stathopoulos says, “looks at different characteristics of the urban environment in order for us to see how we can influence the configuration of buildings, how we can improve city planning to accommodate wind turbines and how we can generate higher wind speed, which would mean more energy.”

One significant challenge he identifies is rethinking urban planners’ approach to wind itself. For as long as humans have been building structures, “wind has been the enemy, because we want to protect our buildings, our property and human life,” he says.

“In the area of wind energy, we have to think of the wind as a friend. The more wind you have, the more energy you generate.”

At Concordia’s Building Aerodynamics / Wind Tunnel Lab, Stathopoulos and his team of students simulate Montreal wind conditions with the aid of a 3D scale-model map of sections of downtown Montreal and a large wind tunnel — the only one of its kind in Quebec.

They ran experiments in the wind tunnel and compared them to data collected by anemometers—instruments that measure wind speed — placed atop two buildings in downtown Montreal. In doing so, his team confirmed that the measurements gathered in the lab were similar to those taken outside.

Armed with the knowledge that they could confidently replicate real-life conditions in a controlled environment whenever they wished, Stathopoulos was able to conduct multiple experiments on wind speed without being dependent on the whim of Montreal’s mercurial weather. 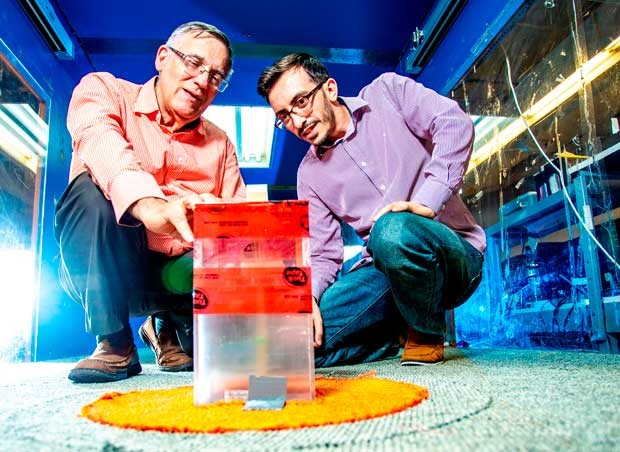 As Stathopoulos frames it, cities have three options when it comes to developing ways of generating power by turbines: they can build freestanding turbine farms within a city’s boundaries, retrofit existing buildings with new turbines or incorporate turbines into architectural plans before a building is erected.

Of these, the third is the most feasible. Not only would a built-in turbine become part of a structure’s overall configuration, it would also be more aesthetically appealing than tacking a turbine onto a structure that had been built before harnessing wind power in the vicinity was deemed even remotely practical.

In order to convince investors to take the risk of incorporating turbines into their buildings, however, governments have to be willing to offer incentives like subsidies and tax write-offs to developers, adds Stathopoulos.

Moreover, the public has to be convinced to get behind these kinds of projects.

But no matter where or how wind turbines do appear in urban centres, Stathopoulos is aware that major strides need to be made before they’re considered a legitimate source of energy.

Based on results he achieved through his experiments, he says that the amount of power that can be generated at present is quite low, to the point where some people are saying that it’s not worth thinking about.

“But in my view, we can start low, and by making modifications — and that’s the advantage of research — you can really get some much better results. It’s a question of persistence and hard work.”


Partners in research: The study was made possible by funding from the Natural Sciences and Engineering Research Council of Canada.

Find out more about the Department of Building, Civil and Environmental Engineering at Concordia.