Tall, energetic and forthright, Debbie Donelle, BComm 91, GrDip (accountancy) 92, is well suited to talk frankly about breasts, bras and their frequent mismatch. Her store on Montreal’s Monkland Ave., Lingerie DeBra, plus her Pointe-Claire branch, have become a destination for women who are woke to the yoke around their chests and want a good fit whatever the occasion. 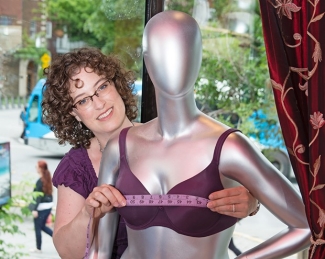 “A bra has to fit like a glove, and that’s why we have well over 120 sizes,” Donelle explains. Besides many styles, DeBra stocks bathing suits, nursing bras and sports bras.

Donelle got into the bra biz in her 40s. She started her professional life as an accountant then switched to work at a private school. During these years she married and had two children.

When her kids were young, Donelle took a sabbatical so the family could spend a year in Lyon, France. The buxom Donelle was having a hard time finding a bikini there. She mentioned this to an acquaintance, who shared a catalogue for a U.K. company that caters to D-cup-and-up women.

On a weekend trip to London, Donelle was fitted correctly and had the kind of epiphany that her clients do now. “I had an emotional experience about my body,” she says. “I felt better about myself, my body looked better. The minute my breasts were raised, I looked thinner.”

When she returned to Montreal, she continued to order bras online but, being busy and with a new job at Dawson College, she’d sometimes miss the deadline for returns. So Donelle started to pass on the extra bras to friends. And during Montreal’s scant-clothing summers she noticed a whole lot of women didn’t seem to be wearing correctly fitting bras. “There are no bras here, and I’m not alone,” she realized.

So, leaving a guaranteed job with benefits and a pension, she parlayed her love of planning and an entrepreneurial itch into DeBra. Donelle says her varied background and “exceptional” training at Concordia's John Molson School of Business prepared her well for the challenges of opening a new business. She travelled to Toronto to train in fitting, and held bra-fit parties, drumming up a clientele before signing a lease and opening in 2012, expanding to her Pointe-Claire outpost four years later.

Sizing someone properly is an art, a science, and can require a deft psychological touch. People can be resistant, “You don’t know what’s happened to their bodies, their breasts,” Donelle says. “They’re opening themselves up.… It’s a bra, but it’s not just a bra.”

A database keeps track of clientele’s purchasing history and sizing over time, and Donelle and her staff teach women how to wash and care for their quality bra so it lasts longer. (Hint: it’s easier than you’d think.) The downside for business is that even the most faithful customers needn’t return for two years.

Thanks to their superb service DeBra has a loyal following and draws women from as far afield as Vancouver. Mothers come in with their daughters and, particularly after Donelle gave a presentation at her daughters’ high school about breast health and bra fit, daughters bring in their mothers.

Though Donelle’s still not making the salary she was, she cares about creating a good workplace with fair pay for her employees, and loves the difference her store makes to customers’ lives.

Donelle recalls one woman with an active job, two small kids, heavy breasts and welts on her shoulders. After being put in a proper bra, she is free of pain, and comfortable in her body and life. “If we can take the weight off their shoulders — literally and figuratively — that’s the best part about my job,” Donelle says.

For information or to book an appointment for a fitting, visit lingeriedebra.com.