“Many people would like to be entrepreneurial, but simply don’t dare for risk of failure.”
|
By J. Latimer
Source: Concordia University Magazine

When Gert Rautenberg, MBA 91, gets the chance to sail, he prefers the Baltic Sea over calmer waters. “The Mediterranean is lovely, but it’s more like drifting — not sailing,” he says.

Rautenberg’s approach to sailing is an apt metaphor for his career. He is constantly challenging himself. Four years ago — at age 49 — he left a managing directorship at a prominent American financial institution to co-found a new company, Global Fund Analytics (GFA). Based in Luxembourg, GFA provides data analytics and business intelligence for the financial services sector. 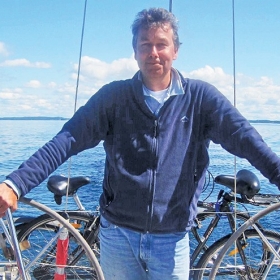 Gert Rautenberg, CEO and president of Global Fund Analytics in Luxembourg, is also is an avid sailor.

“Our team may be lean, with 10 people, but we have sizable clients,” says the German-born Rautenberg, who’s GFA’s CEO. “We provide service to between five and 10 of the top 20 global asset managers. I lead the strategy and business development end, while my business partner and cofounder Jan Lux is the tech and ops guru.”

Rautenberg notes that doing his MBA at Concordia in what now is the JMSB was formative in ways he never imagined. A decision-making lecture, for example, took an unexpected turn.

“It was an evening class about something I thought was going to be dry and logical — business negotiating — but it became quite emotional,” Rautenberg recalls. “The class highlighted that you can’t always make everyone happy. Emotions flared. You need to be careful as to how you position yourself to create the best outcome, but also so that you can look at yourself in the mirror. That really stuck with me.”

Rautenberg lived in Germany until the age of 11, when this family moved to Hong Kong in 1977. His father shifted their textile manufacturing business to Asia after decades in Europe.

As a young adult, Rautenberg decided to go his own way professionally, rather than run his father and grandfather’s textile company. He moved back to Germany and, as was customary in Europe at the time, he did an apprenticeship — banking — before starting university in Koblenz. His undergraduate business degree included two exchange semesters in Canada: one at Queen’s University in Kingston, Ont., and one at HEC Montréal.

Next he applied to Concordia’s MBA program. Upon graduation, Rautenberg immediately secured a job at Arthur Andersen (now dissolved) in Dusseldorf, Germany, and Luxembourg, eventually becoming a senior manager and director.

After nine years, he resigned with colleague Jan Lux to start their first company, European Fund Services (EFS) in Luxembourg. It was a bold move, to leave such a senior position in an established firm.

“In North America you have a bit more of an entrepreneurial culture, whereas in Europe, it’s more of a corporate culture,” says Rautenberg. “Many people would like to be entrepreneurial, but simply don’t dare for risk of failure. We were more afraid of not trying than failing.”

Rautenberg and Lux struck out on their own again in 2014 with GFA. “I sincerely feel privileged at my age to still be involved with an aspect of the industry that is relatively new — data and what to do with that data now that processing has become so automated,” Rautenberg says. “I’m happy to be able to still do something entrepreneurial.”