Looking back on her MBA, alumna was most influenced by a course in entrepreneurship
|
By J. Latimer
Source: Concordia University Magazine

How did the manager of a fitness club in Montreal take the step to senior vice-president of world business at Oakley, the iconic sunglasses and lifestyle brand, and then make a further unlikely jump to the maker of Ski-doo, Sea-doo and other recreational vehicles? 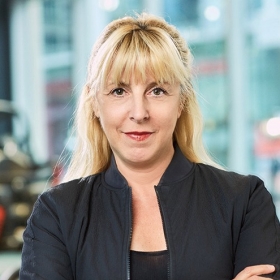 It was natural for Josée Perreault, MBA 89. She had been working at a downtown Montreal location of Nautilus Plus in the 1980s when she decided to pursue her MBA at Concordia. “The MBA really focused my ambition and directed me toward my strengths in marketing, HR and qualitative aspects of business,” says Perreault.

She spent 23 years at Oakley before becoming a senior vice-president at Bombardier Recreational Products (BRP) in 2016. Perreault’s mandate at BRP is to set up an incubator inside the company to focus on their three-wheel vehicle. Perreault built a team of 30 and set to work. “We’re having a major product launch this fall that will re-imagine and re-energize the company’s three-wheel category,” she reports.

The leap from Oakley to BRP wasn’t as incongruous as it may sound. Oakley is about more than sunglasses: its first product was motocross grips, which evolved into other products dedicated to power sports.

Learning from the best

Looking back on her MBA, Perreault was most influenced by a course in entrepreneurship. “The lecturer was a business person with a multimillion-dollar company who gave us very practical information,” she recalls.

“I’ll never forget one class where we had to evaluate a real Montreal business case. I got an A because I realized it had to go bankrupt. It was an enlightening moment. I learned that the right decision isn’t always easy and you have to make tough calls.”

After her MBA, Perreault made three career stops before she began her ascent at Oakley, where she expanded her responsibilities and geographical reach with each new role. “Oakley gave me my wings,” says Perreault. “It was an exciting time because the brand was exploding and I was part of that growth. I had tremendous opportunities, working in Paris and Zurich and living in California. It was my dream job and they were my family.”

When corporate ownership dismantled the Oakley executive team in 2015, Perreault returned to Montreal, where her husband works, to rebuild her network and enrol her son in university. She soon landed at BRP.

“It was an easy decision to settle in Montreal. My family is here and I love the city,” says Perreault, who spends as much free time as possible on her electric mountain bike. “Montreal is booming and has a small but mighty business machine. Also, AI [artificial intelligence] is coming, and that’s quite exciting.”

Reflecting on her time at JMSB, Perreault says, “Concordia’s MBA provided an incredible base. I think the value of the degree is increased tenfold if you work a few years after your undergraduate degree. It puts things into context and you can draw on own experiences.”

She speaks from knowledge. After earning an undergraduate degree in urban planning, she worked in management at the fitness club before furthering her education. “I really loved managing a business provided by the fitness club,” she says. “I knew I had more to offer and an MBA was the perfect vehicle to go forward.”