The career of the young star of Pour Vivre Ici is on the rise
|
By Richard Burnett
Source: Advancement and Alumni Relations

Amena Ahmad, BFA (theatre perf.) 12, was in make-up the morning she discovered that her role in the 2018 Paramount – Amazon Studios TV series Tom Clancy’s Jack Ryan had been cut.

“I was originally cast to play a doctor. Then when I was getting my hair and make-up done, there was a knock on the door and they told me, ‘The writers rewrote the scene this morning and your character doesn’t exist anymore,’” Ahmad recalls. 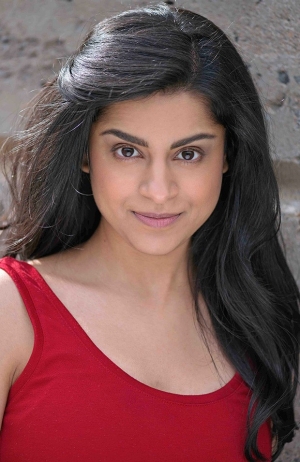 Actor Amena Ahmad attributes some of her growing success to fellow Concordians. “Concordia alumni have helped me along every step of my career,” she says. | Photo: Karen Benedict

“I still got paid. But my heart sank when I learnt the news. But such is show business — you take the highs with the lows!”

Ahmad has had plenty of highs. In fact, since graduating from Concordia in 2012, she has been on a roll. Among her credits are the 2018 Quebec film Pour Vivre Ici and the 2017 TV series Fubar: Age of Computer.

Ahmad recently sat down for a candid Q&A about her rising star.

What was it like to work on the hit 2018 Quebec film Pour Vivre Ici?

Amena Ahmad: “It was my first feature film. Honestly, I never thought I’d be working much in the French side of the industry. I’m an anglophone and speak French with an accent.

So in Pour Vivre Ici I play a woman from India — I speak English in the film — and it was a wonderful opportunity to work with well-established actors in the francophone industry. It is easy to get trapped in an English bubble. The actors and production workers on this film gave me a wonderful introduction to francophone cinema, and I look forward to continue working in French.”

What has the experience been like on the set of the Viceland TV series Fubar: Age of Computer?

AA: “Fubar has been a wild ride. It has been adventurous in all the right ways, thanks to actor Paul Spence [star of Fubar].

I play a young aspiring millennial, up-and-coming music producer who deejays, and the character pokes fun at young millennial culture, plays up the stereotypes. My character will exploit any trend to make her band become the next big thing! It was a lot of fun to be a part of this cult comedy.”

What was it like to work with Paul Spence?

AA: “He is in character one moment, the next we are talking about the poetry of Yeats. He is a very smart, versatile and generous actor.”

Talk about your role in the acclaimed play Bhopal, presented by Montreal’s Teesri Duniya Theatre in 2014.

AA: “It was because of Bhopal that I was able to get an agent. It was my start working as a professional actor, thanks to director Liz Valdez [BFA 04], who also taught a theatre workshop I took at Concordia.

Liz suggested I try out for a role and we took the student-teacher dynamic to the professional level. Also, I’m not Indian, I’m Pakistani, but it is great to be part of a play about the region one grew up in. It is great to honour our roots like that.”

How did you become involved in the Black Theatre Workshop (BTW) Artist Mentorship Program?

AA: “I feel like Concordia alumni have helped me along every step of my career because BTW artistic director Quincy Armorer [BFA 97] is also a graduate of the theatre department at Concordia. It was partly his initiative — he contacted me about the BTW program and I got in. When other professionals help mentor and guide you, it helps give you that boost of confidence to raise the bar.”

Have you ever lost roles because you are a member of a visible minority?

AA: “Fubar and Pour Vivre Ici are examples of two projects that sought visible-minority actors. So I don’t feel like I am being boxed in. That said, I think those kinds of opportunities are also few and far between.

I can’t tell you how many times I’ve auditioned to play a doctor: ‘Oh, she’s Pakistani? She’ll be a good doctor.’”

AA: “No one can really tell you how to be successful or give you a magic key. What I got out of the theatre program at Concordia is every faculty member introduced me to a different way of working, a different creative process that gave me an idea of the attitude and work ethic needed to go far in this business. Concordia gave me a solid foundation to build upon.”