Chris Hayes gets his Stanley Cup ring – after 46 years

The hockey talent of Chris Hayes, BA (econ.) 71, brought him prominence on the ice in the late 1960s and early ’70s for Loyola College — one of Concordia’s founding institutions — and induction into the Concordia University Sports Hall of Fame in 2004.

It also allowed Hayes to go on to play professionally after graduating, and to make it into one game for the National Hockey League’s Boston Bruins during the 1972 Stanley Cup playoffs. Boston won that semi-final match against the St. Louis Blues 7-2 and would go on to beat the New York Rangers to win the Stanley Cup. 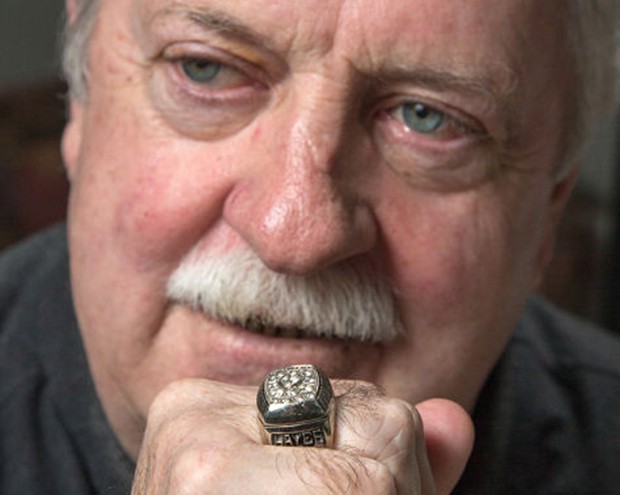 Chris Hayes is pictured with his new 1972 Stanley Cup ring. His NHL career was curtailed by injuries and the difficulty of breaking into the star-studded lineup of the 1970s Boston Bruins.

Yet Hayes never got a coveted Stanley Cup ring — that is, not until April 2018, after his friend, former Liberal Member of Parliament Hector Clouthier, alerted the Bruins.

When the news of the belated acknowledgement broke, Hayes, now 71 and a retired banker, agreed to give just a few interviews — including to Concordia.

His Concordia Sports Hall of Fame tribute reads, “Christopher Hayes was regarded as the guts and glory of a celebrated hockey era at Loyola College. The high-scoring, determined centre played four seasons with the Warriors, leading them to three Ottawa-St. Lawrence Athletic Association titles and three appearances at the national championships.”

In May 1972, Loyola Alumnus magazine reported that the “former Loyola Hockey Captain and honours student has been called up to the Boston Bruins for the Stanley Cup Playoffs. Hayes won Rookie of the Year honours this year with the Oklahoma City Blazers of the Central Professional Hockey League.”

However, as the Ottawa Citizen reported, “Injuries and a lineup stacked with left-wingers kept him out of the NHL.”

Hayes spoke to Concordia about his hockey career, his new ring and life after hockey.

What was it like to get your Stanley Cup ring 46 years later?

Chris Hayes: “I knew it was coming. Bruins president Cam Neely told my friend Hector Clouthier, who was the catalyst behind all of this.  There was a knock on the door — I live alone, my wife Jo-Anne died [of cancer in 2011] — and a courier dropped off a package.

After, I walked over to the mantle atop the fireplace and said to my wife’s picture, ‘Okay, honey we’re going to do this together.’ I opened it up and there it was — typical of the Bruins, no cover letter, no nothing! It was in a black box wrapped in bubble wrap.

I was thinking, ‘Is this really happening to me? I guess it is happening because the ring is on my finger now!’ It was a great feeling and put closure to my hockey career.”

Do you remember that playoff game with the Bruins?

CH: “Oh yeah, I remember a lot about it. I was called up from the Oklahoma City Blazers, which was the farm team for the Bruins. We had played a lot of exhibition games with the Bruins so I already knew most of the guys fairly well. 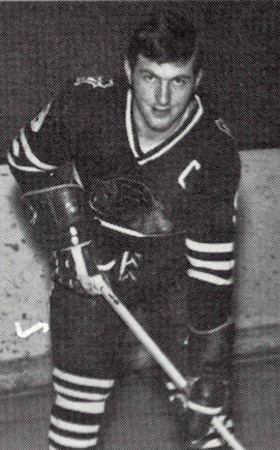 Chris Hayes during his playing days with the Loyola Warriors. | Concordia Records Management and Archives

You were one of the boys.

CH: “Yeah. But playoff hockey is different — you can feel the intensity. You get on the ice and you know every playoff game is crucial. It’s intense, but once the game starts, things settle down.”

When you were a student at Loyola College, what was it like to play hockey with the Warriors?

CH: “I wanted to go back to school to get an education [after playing for the Generals]. I had no awareness of the Warriors or university hockey. I was walking around campus one day with an Oshawa Generals jacket on and some guy asked me if I wanted to play hockey. I soon found out that university hockey is very high calibre.

I remember the names of all my teammates, it was a close family. We had a great rivalry with the Sir George Williams [Concordia’s other founding institution] Georgians.”

What was it like to be inducted in the Concordia Sports Hall of Fame in 2004?

CH: “It was one of the major milestones of my hockey career. I did well at Loyola.”

After you hung up your pro skates at the age of 28, you became a banker. How did that happen?

CH: “I walked away from pro hockey after a lot of deliberation. I had a good education and felt it was better to get into the corporate world in my 20s. Hockey opens a lot of doors. People identify with hockey players. Everybody still asks me questions about my hockey career. So hockey opened a lot of doors for me.

One day I walked by the Bank of Nova Scotia, I got an interview on the Friday and they hired me on the spot. It was retail banking but I wanted to get into investment banking. So in 1976 I joined the Bank of Montreal and by the time I retired in 2004 I was a senior commercial banking manager at main office.”

How did your time at Loyola help shape you and your career?

CH: “I grew up in college, I had good professors, I lived away from home and matured a lot. It gave me a good grounding and I am grateful for it. It was also one of the most rewarding times for me playing hockey.”