As the university drops the puck on a new NHL-grade rink, here’s a look at the Ed Meagher Arena’s 46-year history
|
By Tom Peacock

The Ed Meagher Arena, seen here under construction in 1966, was originally called the "Loyola Arena." | Courtesy of the Records Management and Archives (RMA) Department at Concordia

In September of 1966, the Loyola News’s sports editor L. Ian MacDonald took to his column to argue that the new Loyola Arena be named after a 40-year-old coach and teacher called Ed Meagher.

“The would-be selectors have overlooked the man whose name belongs on that building before any other. The man who has done more for Loyola in athletics than any other,” MacDonald wrote. 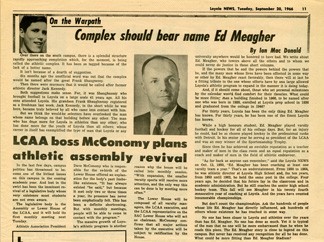 At that point, the sports complex was still under construction — it opened in January 1967.

“I just thought, let's have a name on it,” MacDonald says, 47 years later. These days, he’s a well-known political columnist and broadcaster. “There were several names floating around, but Ed's wasn't really one of them until I wrote that piece.”

MacDonald made a good case: a tremendous athlete, Meagher played varsity football and hockey at Loyola College as a student. Soon after graduation, he was invited back as a math teacher, as well as a hockey and football coach.

Meagher taught until a few years before his death from cancer in 1995, at the age of 69. He served as athletics director at the college and at Loyola High School. People called him “Mr. Loyola.”

On January 28, 2000, 34 years after MacDonald’s article was published, Concordia renamed the arena in Ed Meagher’s honour. In November 2013, the Ed Meagher Arena opened its doors to the next generation of Stingers with a new National Hockey League-grade rink and a state-of-the-art, eco-friendly refrigeration system. 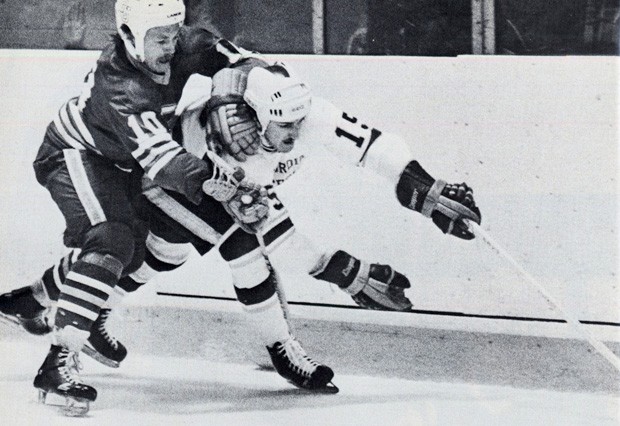 The Stingers in action during the 1975-76 season. | Courtesy of Concordia University

As sports editor and hockey equipment manager, MacDonald remembers watching varsity games in the new arena — especially during the 1967-68 season, when the Loyola Warriors made it all the way to the national finals.

“We had a very talented team, many of them from Loyola High,” he says. “There were also some guys who had played Junior A, including Chris Hayes who had played in Oshawa with Bobby Orr.” 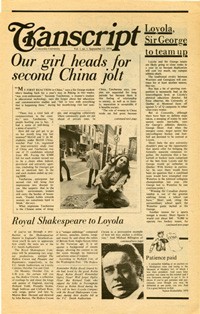 On Saturday night, March 2, 1968, in the Loyola Arena, the Warriors ended the “Georgian Hex” by beating the Sir George Williams Georgians in the Ottawa-St. Lawrence intercollegiate championships for the first time in four years; Hayes scored twice.

"That good team effort is what I wanted and I got it," an "overly thrilled, cigar-smoking" Loyola coach Dave Draper told the Montreal Gazette. That year, Draper’s players went all the way to the national final.

Interschool competition remained a hot topic even after Sir George Williams University and Loyola merged in 1974. When The Transcript— the first in a long line of Concordia newspapers that includes The Thursday Report and runs right up to today’s NOW newsletters — hit stands on September 12, 1974, it included a front-page feature about how the two sports departments would soon become one. But, the article added, “the traditional rivalry between Warriors and Georgians will continue for another season.”

At that time, the Loyola Arena functioned as more than just a sports venue. Christine Mota, director of Concordia’s Media Relations, graduated from the university in 1977. She recalls attending concerts, writing exams and even graduating in a place otherwise reserved for faceoffs and body checks.

“It was really the only large space at Loyola,” she says, remembering how students packed themselves into the arena to register for their courses.

“By the time you got to the front of the line, the course was full, so you'd have to go and stand in another line," she says. "I actually did not get any courses that I wanted in my first year!” 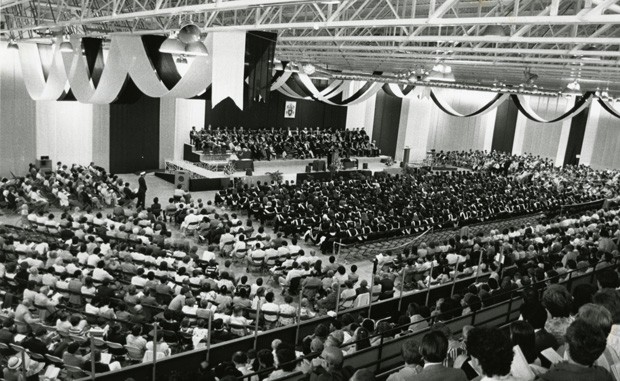 In the 1970s, convocation was held at the arena. | Courtesy of RMA

“The most historical win”

In 1998, at the soon-to-be-renamed arena, a Concordia hockey team took another crack at a national title — this time, during the inaugural edition of the Canadian Interuniversity Athletic Union (CIAU, now CIS) women’s championship.

“It was the top six teams in the country and we were hosting,” says Les Lawton, who has coached Stingers women’s hockey for more than 30 years and 1,000 games. He also took Team Canada to a world championship in 1994.

As a boy in the Montreal neighbourhood of Nôtre-Dame-de-Grâce, he remembers playing at the new Loyola Arena.

"It was the only indoor rink in the area," he says. "So if you got to play there it was big time." At one particularly raucous Georgian-Warriors game, an enthusiastic student jumped onto the ice with a broomball stick and began marching up and down.

When the last game of the 1998 CIAU tournament rolled around on Sunday, March 1, the arena was crammed with a capacity crowd of 1,000. Concordia had landed 11 of the last 14 Quebec conference championships. According to Lawton, “We were heavy favourites.”

For good reason: the Stingers beat the University of Toronto Blues 4-1.

“The national championship is something we've focused on all year. It's a tremendous feeling to accomplish what you set out to do,'' said Corrine Swirsky, a superstar Concordia player who scored a total of five tournament goals, in an interview with the Montreal Gazette.

“That’s probably the most historical win we’ve had in our rink, though we’ve had some great events,” says Lawton. 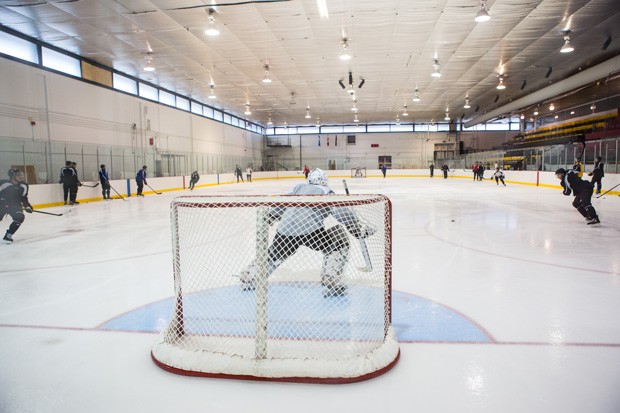 This year, his Stingers are a very young squad with 12 new recruits. Despite the women’s 2-7 record, the coach is encouraged by what he has seen so far. “We’ve been having some difficulty getting wins, but we’ve been very competitive.”

For Lawton, the Ed Meagher Arena’s refurbishment represents a major boost for hockey at Concordia.

“It’s going to have a big impact on recruitment,” he says. “Our players are very comfortable — they feel at home. I’m really excited about the next two or three years. We’re moving in the right direction.”

The men’s Stingers play Brock University on Friday, November 22 at 7:30 p.m. and York University at 2 p.m. the following day. In women’s hockey, Concordia takes on Queen’s, Ottawa, Ryerson, York and Carleton universities at the Theresa Humes Tournament from January 3 to 5, 2014.

The Ed Meagher Arena is located at 7200 Sherbrooke St. W. on the Loyola Campus at Concordia University.

Check out the related videos, media kits and archival photos.