Brian Kelly, BEng 83, spent most of the past two decades overseas, working on engineering projects in over half a dozen countries. It was a rewarding and lucrative career for him. Nonetheless, the veteran civil engineer says he’s happy to come home to his native Montreal. Not that he’ll be taking things all that easy.

Kelly will be spending the next several years working on the construction of the new Champlain Bridge, a massive project awarded to Quebec engineering and construction giant SNC-Lavalin two years ago. Specifically, Kelly will be designing the many complex temporary works the project requires, such as cranes, some of which will be bigger than anything he’s done before. 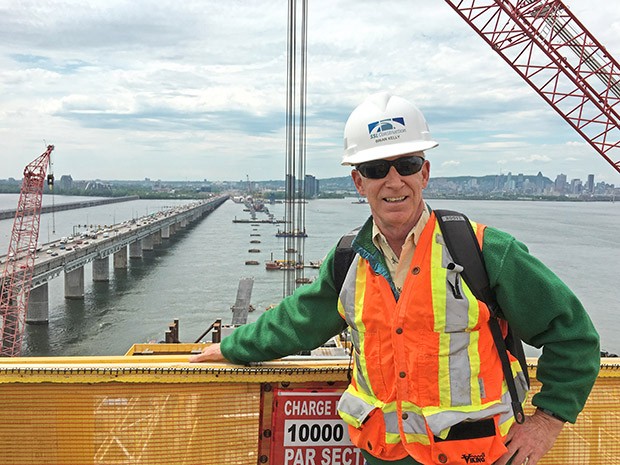 Brian Kelly will be designing the many temporary projects necessary for construction of the new Champlain Bridge.

“I’m quite proud to work there,” Kelly says. “It’s a huge job. There’s never been one like it in terms of size and budget — it’s the biggest civil engineering job in North America.”

Ground was broken on the $4.23-billion project in June 2015. Kelly wasn’t around, though — he was still in Angola, working on a separate project for SNC-Lavalin, his employer for the past 15 years. He returned from southwest Africa only recently and says he called contacts he had in the company to get a position working on this most iconic of Montreal infrastructure projects.

While all the senior management positions had been filled for some time, Kelly was offered a position in temporary works — a job he says attracted him because of the sheer scale of what was involved. “Temporary works is huge,” he explains. “Everything is 20 times the scale of what we’re used to doing. For instance, on most projects we use a 60-ton crane. Here we’re using a 1,000-ton crane.”

Those gigantic cranes, placed on two big barges in the St. Lawrence River, are used to position the bridge’s pre-cast footing sections within 50 millimetres of their proposed position, in deep, fast-flowing water. “It’s never been done before,” he says.

If Kelly sounds enthusiastic about his work, it may have something to do with the nomadic nature of his career as a footloose engineer. While he’s been with SNC-Lavalin for a decade and a half, he’s never been “home” for very long. And it’s hard to get bored of somewhere if you’re only there a few years at a time.

After graduating from Concordia came a parade of smaller jobs and a succession of employers, “I worked for 10 different companies in 10 years,” he says. And that was just the start. Kelly’s career has taken him from James Bay, Que., to Venezuela, the Philippines, Iran, back to Montreal, Algeria for an eight-year stretch, the Dominican Republic, Libya — where he was stuck at the outbreak of the civil war in 2011 — and Angola for three-and-a-half years.

Kelly was naturally drawn to engineering, coming from a family long involved in the construction industry. It sounded like a fun way to make a living. Encouraged by his academically accomplished older sister Cassie Kelly, BSc (civil eng. ) 77 — she skipped two grades on her way to getting her own engineering degree — he decided to pursue a professional rather than academic career.

While studying at Concordia, Kelly was particularly fond of faculty like Oscar Pekau, Matthew Douglass and Adel Hanna. Those professors helped turn a self-admitted “not-so-great” high school student into someone, he says, whose “main goal was to get out and do well.”