Sustainability in the marvelous city

“I always believed in the power of business to contribute to society,” says Polatschek, senior consultant for climate change and sustainability services at the city's Ernst & Young (EY) office. 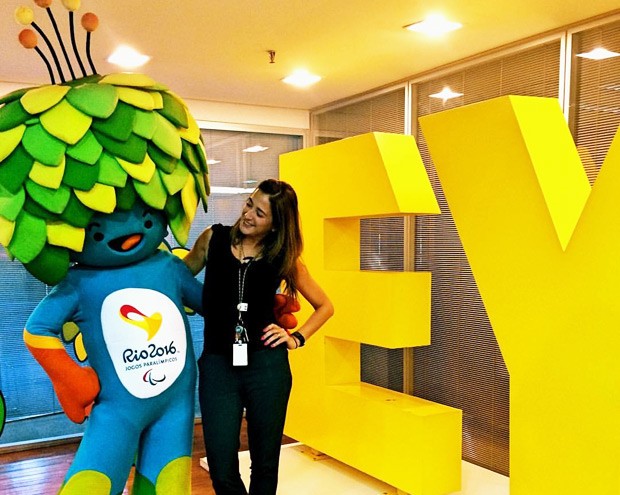 Working in social responsibility and sustainability, Anna Polatschek deals with a range of people and ideals. “In my area of expertise, the more open to differences you are, the better at aggregating them you become.” | Photo courtesy of Anna Polatschek

Among the various projects conducted by EY as an official supporter for the 2016 Rio Olympic Games, one particular initiative stood out.

The Olympic Legacy Volunteer Program, spearheaded by Polatschek, connected 27 EY professionals from across multiple areas and eight different countries to a handful of local non-governmental organizations. In the three months leading to the Olympics, volunteers working remotely offered their expertise to community organizations that would not have been able to afford their services.

In the last week of the program, all volunteers were flown to Rio to submit their reports and attend the Olympic and Paralympic Games in August.

For Polatschek, the opportunity to participate in a project that focused on a corporate social responsibility initiative was especially attractive.

“I usually work for external clients,” she says. “This time I looked inwards and we did a program that was also benefiting EY professionals. That was particularly interesting.”

And of course, being involved with the Rio Games was a great bonus.

“It was an awesome experience!” Polatschek says. “I got to attend many games and saw some of the finals. I had some really epic moments at the games with the EY group.”

Polatschek has always been attracted to the idea of contributing to society. It wasn’t until she took a class on globalization and the environment at Concordia, however, that she began to direct her career towards using business as a force for positive change.

The research she was able to do in the class introduced her to the concept of corporate social responsibility. “It made sense to me that I could have a career in the business sector and make a positive contribution to society,” she says.

Beyond developing her own interests, she is grateful to Concordia for having introduced her to a rich and diverse environment. “I thought it was quite interesting to study political science in Montreal, having the whole dynamic of Quebec politics really close by,” Polatschek says.

“I think understanding the social problems of Canada in such a multicultural environment, and the class discussions with people from all over the world, was really amazing.”

After graduating, Polatschek quickly jumped at the opportunity to work in social responsibility for the public sector. She moved to Halifax to work for the Nova Scotia Provincial Lotteries and Casino Corporation.

Four years later, she yearned to return to her native country. Leaving Canada for Rio, she was immediately attracted to EY’s purpose statement: Building a better working world.

“This made complete sense to me,” Polatschek says. “I myself had been working in corporate social responsibility and trying to build a better working world.”

Polatschek is excited to be part of a professional field that is constantly developing. “In Rio and Brazil as a whole, there is so much opportunity,” she says. “So many areas are still in early stages of development.”

Upon her return to Rio, Polatschek also became involved with a program called Rio+B, developed in collaboration with B Corporations and the Ellen MacArthur Foundation. The program aims to engage companies based in the Rio area, and assist them to quickly and efficiently assess and improve their social and environmental impacts.

“I think there’s an opportunity for Rio to be at the forefront of a new movement of socially responsible companies, transitioning to a new and more collaborative and circular economy,” Polatschek says. “The idea is to replicate this movement to other cities and make this whole movement much bigger.”