Education is a long-term quest for 74-year-old student and three-time grad
|
By Leslie Schachter
Source: Advancement and Alumni Relations

For Archie Fineberg, BComm 66, MBA 73, BA 16, education has been a lifelong pursuit.

The 74-year-old Montrealer walked across the stage at Place des Arts last June to receive his diploma after graduating with distinction from Concordia’s Liberal Arts College — his third degree from Concordia. 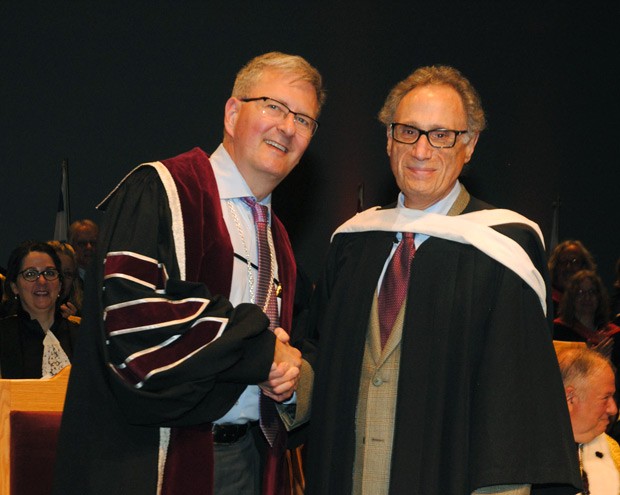 Three-time graduate Archie Fineberg poses for a photo with Concordia president Alan Shepard at his convocation ceremony in June 2016.

“I have a very warm spot in my heart for Sir George and Concordia,” says Fineberg, who earned his BComm and MBA from Sir George Williams University, one of Concordia’s founding institutions. “It’s been a very important part of my life.”

Although Fineberg, a retired financial manager, has never stopped taking courses of one sort or another throughout his adulthood, the decision to go for another degree was borne out of the desire to take on something new.

“I had always thought that studying subjects like literature, philosophy and art history, was beyond me,” admits Fineberg. “These were for smart people. I wasn’t really sure I could grasp it, so I thought that would be a good challenge.”

He adds, “I wanted to understand what philosophy was all about and to learn from the great books of literature like Homer’s Odyssey and Beowulf. I thought, this is so far removed from what my previous experience had been but it’ll be quite a challenge and I’ll learn something new.”

Fineberg enrolled as a part-time student in 2010 while still working a few days a week. About halfway through the program, he made the decision to retire completely and focus on completing the degree, majoring in western society and culture.

2016 was an exceptionally tough year for Fineberg. He lost his brother. His wife, Montreal author and journalist Elaine Kalman Naves, suffered a very serious accident. He himself had a part of his leg amputated due to illness.

Therefore Fineberg says it was a thrill to attend the convocation ceremony and receive his degree “with distinction.”

“Being able to walk across the stage to receive my diploma was actually quite thrilling,” he says.  Fineberg is deeply grateful to the faculty for allowing him to complete the last three required credits despite not being able to attend the remaining classes and final exams due to the surgery and subsequent rehab.

Fineberg found his professors very dedicated and encouraging, and he was impressed with the amount of energy they put into grading his papers.

Despite the cordial relationships he felt with his professors, Fineberg found that trying to navigate the demographic divide among his fellow classmates was a little bit tricky.

Fineberg feels emboldened by his recent experience. Inspired in particular by some of the fine arts-focused courses he took at the Liberal Arts College, he has decided to pursue another degree this fall. He is currently enrolled in the Department of Art History in the Faculty of Fine Art.

“There may be a lot of people around who are like me, who may be thinking that they might like to do something like this but are worried that maybe it’s too late,” he advises.