It may seem like an unlikely journey from earning a degree in philosophy to running what might be the coolest TV studio in Canada. Yet Michael Kronish, BA 91, has been able to transcend that gap. 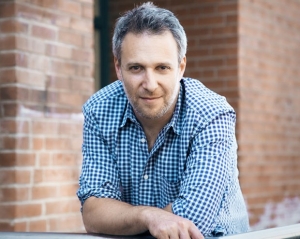 Michael Kronish arrived at VICE Canada in 2015 after a long career in television production.

In 2015, Kronish began his tenure as executive vice president Television and Online of VICE Media Canada in Toronto. “The title means that I head the production studio I set up last year on behalf of VICE Canada,” he explains. “I run all of the television and digital video production.”

VICE Canada is the Canadian arm of the hugely successful digital media and broadcasting company VICE Media, now based in New York City. VICE offers what it calls “vertical websites,” integrating an array of web platforms that include articles, videos, photos and more, aimed primarily at millennials.

In February 2016, VICE Media launched VICELAND, a cable television channel available in the United States and Canada. Similar channels are in the works for over 50 countries worldwide.

“We’re well known for producing video for our vertical websites. VICE was already producing a number of television shows, most notably VICE on HBO,” he says, referring to the Emmy-award-winning, edgy series.

Now Kronish’s mandate is to create homegrown documentaries that fit the “VICE sensibility.”

As he explains: “The ‘VICE sensibility’ is being curious about the world and the people around the world; to have a unique point of view; to be doing things differently than everybody else; to speak truth to power; to look our audience in the eyes and not speak down to them or up to them, or to not suck up to them; to be young and fresh and not dogmatic; to empower the storytellers to dive deep into what their interests are.”

Some examples of Canadian-made VICELAND shows are Abandoned, which follows British Columbia skateboarder Rick McCrank as he explores urban decay and deserted locations; Cyberwar, a series about the implications of potential cyber warfare; and the offbeat food show Dead Set on Life with Matty Matheson.

Kronish, who was born and raised in Montreal, admits that he enrolled in philosophy at Concordia in the 1980s because “I didn’t know what I wanted to do.” While at the university, however, he was introduced to a world not related to his studies.

“Concordia opened the door to me for other things I wanted to do, like DJing and hosting shows on the student radio station,” Kronish says. “I met people who were into filmmaking. The Visual Arts Building was one of my favourite spots.”

He eventually partnered with Robert Gervais, BFA 89, MBA 93, on some early filmmaking projects. Kronish parlayed that into a lengthy career in media that included an executive producer position at Montreal-based Zone 3, his last stop before VICE Canada.

Although it’s still early to pass a verdict on the success of VICELAND, “So far it’s exceeded everyone’s expectations,” Kronish says.

He also admits that his new position keeps him rather busy. “It’s quite a big job,” he says. “It’s fun, though!”