Alumnus Robert Briscoe gives back with generous gift to the John Molson School of Business
|
By Alyssa Tremblay
Source: Advancement and Alumni Relations

Robert Briscoe, BSc 67, MBA 73, received the education he always yearned for — thanks to night courses offered by Sir George Williams University, one of Concordia’s founding institutions. 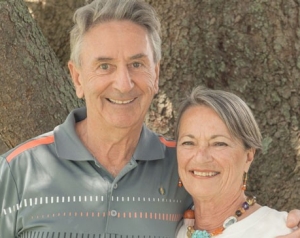 Over 40 years later and having enjoyed a highly successful business career, Bob Briscoe and his wife Raye are paying that support forward with a major donation to the John Molson School of Business (JMSB).

“Concordia is truly grateful that Robert Briscoe is setting the pace by giving back to his alma mater,” says Concordia President Alan Shepard.

“The Concordia community is inspired by his generosity. Bob and his wife Raye will help the next generation of students reach their full potential and the JMSB chart new territory in business studies.”

“Bob is a great example of someone who has given back abundantly to the institution he credits as providing him the tools to succeed,” Harvey says.

“I feel we owe it to Concordia,” says Bob Briscoe, who earned his two degrees by enrolling in night classes, part-time, over 12 years while also working full-time. 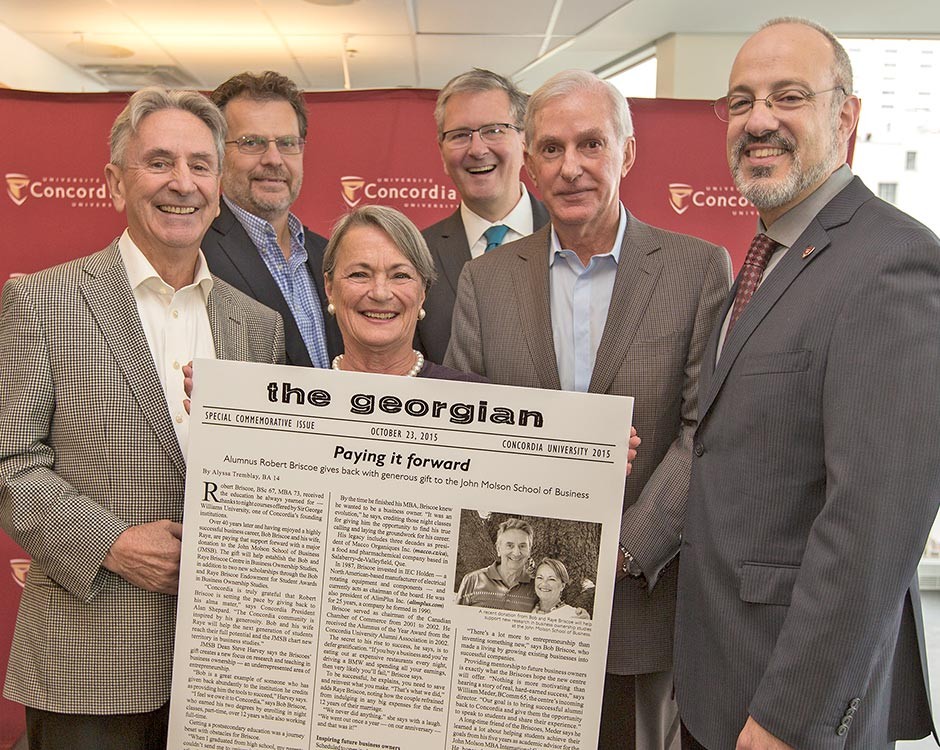 Concordia celebrated the gift from the Briscoes during a ceremony at the John Molson School of Business on October 23, 2015.

Getting a postsecondary education was a journey beset with obstacles for Briscoe.

“When I graduated from high school, my parents couldn’t send me to university,” he explains. “The other issue was that we got married straight out of high school and had children right away!”

To support their young family, Briscoe went to work while Raye Briscoe stayed home to take care of their four children. The only way he could pursue his education was by going to night school. In the 1960s, Sir George Williams was the sole English institution offering university-level evening courses in Montreal.

Briscoe’s dozen years of part-time study — six for his BSc and six for his MBA — were challenging for the young couple. Raye Briscoe recalls how difficult it was to respond to one of her daughters, after she asked why her father was still going to school when all her friends’ dads had finished their studies a long time ago.

“It was hard to explain to her that this was so important, that other people could go during the day but he couldn’t,” she says. “Getting those degrees was incredibly worth it in the end, but we didn’t know just how worthwhile it would be at the time.”

Bob Briscoe initially wanted to be a research chemist, yet when he finished his undergraduate degree he realized that managers were paid a lot more. So he became a student in the first-ever class of the newly hatched MBA program at Sir George Williams in 1969. 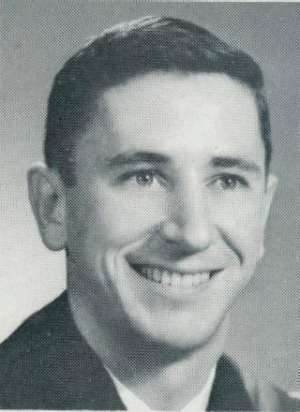 By the time he finished his MBA, Briscoe knew he wanted to be a business owner. “It was an evolution,” he says, crediting those night classes for giving him the opportunity to find his true calling and laying the groundwork for his career.

His legacy includes three decades as president of Macco Organiques Inc., a food and pharmachemical company based in Salaberry-de-Valleyfield, Que.

In 1987, Briscoe invested in IEC Holden — a North American-based manufacturer of electrical rotating equipment and components — and currently acts as chairman of the board. He was also president of AlimPlus Inc. for 25 years, a company he formed in 1990.

Briscoe served as chairman of the Canadian Chamber of Commerce from 2001 to 2002. He received the Alumnus of the Year Award from the Concordia University Alumni Association in 2002.

The secret to his rise to success, he says, is to defer gratification. “If you buy a business and you’re eating out at expensive restaurants every night, driving a BMW and spending all your earnings, then very likely you’ll fail,” Briscoe says.

To be successful, he explains, you need to save and reinvest what you make. “That’s what we did,” adds Raye Briscoe, noting how the couple refrained from indulging in any big expenses for the first 12 years of their marriage.

“We never did anything,” she says with a laugh. “We went out once a year — on our anniversary — and that was it!”

Scheduled to open its doors in 2016, the Bob and Raye Briscoe Centre in Business Ownership Studies will provide a space for students and faculty to cultivate ties with the business community, as well as support teaching and research on business ownership.

“There’s a lot more to entrepreneurship than inventing something new,” says Bob Briscoe, who made a living by growing existing businesses into successful companies.

Providing mentorship to future business owners is exactly what the Briscoes hope the new centre will offer. “Nothing is more motivating than hearing a story of real, hard-earned success,” says William Meder, BComm 65, the centre’s incoming director. “Our goal is to bring successful alumni back to Concordia and give them the opportunity to speak to students and share their experience.”

A long-time friend of the Briscoes, Meder says he learned a lot about helping students achieve their goals from his five years as academic advisor for the John Molson MBA International Case Competition. He hopes the centre’s resources will encourage students to aspire towards becoming owners rather than just employees.

Raye and Bob Briscoe share that hope. As Raye Briscoe says, “Students need to feel that they can do it, and the centre will be there to help them build that confidence.”