Fiction: excerpt from The Roof

Each year, Concordia’s Department of English hands out prizes for excellence in the studies of English literature and creative writing. Those include the Irving Layton Awards for Creative Writing, which are worth $500 each and given to undergraduate students for works of poetry and fiction. To qualify for the fiction award, students must submit a single story of no more than 5,000 words.

This year’s recipient for fiction, Rudrapriya Rathore, calls herself “a worrywart and a student.” She studies creative writing at Concordia, writes fiction, poetry and essays and reads all with great enthusiasm. Rathore was born in New Delhi and grew up in Calcutta and Toronto. She is the recipient of the 2014 Compton-Lamb Memorial Scholarship, and her writing has appeared in various publications, including Yiara Magazine and Headlight Anthology.

Here is an excerpt from her Layton-Award-winning short story “The Roof,” which provides a glimpse into experiences of girlhood in India.

Excerpt from "The Roof" 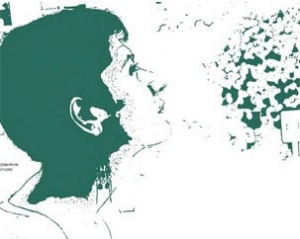 The summer that follows Nandini’s eleventh birthday isn’t different from those that preceded it in any obvious way. She’s not yet tall, though her father predicts that one day, she will be — jokingly, he tells neighbours and relatives who stop by their home that her lengthening feet are outgrowing her, and will one day surely detach themselves and walk away. There’s nothing for Nandini to do but smile on these occasions, her thin lips stretching between wide cheekbones, her weight shifting from one big foot to the other.

When it’s Avi Kumar’s parents who stop by, she doesn’t bother to pretend like she hasn’t heard her father’s joke a hundred times. Instead, she stares at the way the lined pouches and folds on Mr. Kumar’s froglike face quiver as he laughs into his teacup. Avi is a year older and lives above her, on the top floor of the building. Just the thought of him calls to mind some petty trauma inflicted on Nandini’s dignity. A swift tug on her hair to accompany the insult isn’t uncommon.

After a lunch of spiced potatoes and rotis, eaten while perching on a steel trunk in front of the television, Nandini takes her book and climbs up the concrete stairwell as usual. The afternoon is glaringly hot. The heat of the cement warms her feet as soon as she steps onto the open roof. A short wall runs around its perimeter. Six storeys below, traffic moves in a sluggish river densely banked by crowds of people. Though she is out of reach of the clouds of dust and the animal stench rising from the road, the noise is inescapable. Everything that moves on the streets of Calcutta makes noise. Everything honks or shouts or bleats or whistles.

From her vantage point, the roofs of other buildings stretch in every direction. Damp clothes on criss-crossing laundry lines grow stiff under the sun. Maids and nannies spread their green chilies and fish for drying and sit chopping vegetables. Under their eyes and despite the heat, children ride bicycles around each other in circles and draw on the concrete with chalk. Sitting on her bike, a storybook held open against the handlebars, Nandini leans against the only shaded wall on the roof. She has the story memorized, but it makes no difference. The pleasure lies in moving her lips and tongue to form the imagined sounds of a language she has heard only adults speak. It lies also in sitting very straight and still on the red bicycle as the children speed around her. Birbal was the emperor’s most valued advisor. Akbar trusted only him when it came to important matters. Everything in English shone with the promise of something pristine and quiet and grown-up. She turns the pages slowly, only after touching the words on the paper to absorb their square, sophisticated meanings.

Nannoo! A boy’s voice reaches her through the din, laughter hidden in its pitch. A familiar sliver of dread dances through Nandini’s chest. She looks left and right, but he’s nowhere to be seen. The nannies don’t look up from their vegetables. Avi’s brothers, chubby three-year-old twins, sit and squabble over toy cars a few metres away. My little Nannoo!

Nandini closes her book and tucks it under her arm. Her foot toes a pedal, ready to fly. For a moment all is still. Then Avi bursts from behind a laundry line, wet sheets swinging, and snatches the book from under her arm. He is all wiry limbs and slitted eyes and flashing white teeth as he runs, but Nandini has a vehicle — and she thrusts her legs down on the pedals after him. Avi zips between the lines of hanging clothes and clusters of maids and nannies and small children, shouting at the top of his lungs, and Nandini follows, furious, paying no heed to the damp clothes her handlebars ensnare and tear down, ignoring a yelp as a child scrambles out of her way — until, overturning a pot, she’s gaining speed and flailing her hand to free it of sticky chunks of okra and doesn’t realize that the short wall at the edge of the building is fast approaching. She slams her pedals backwards to brake as Avi’s face just ahead of her looks back, still mid-laugh, and the bike’s back wheel skids out of control. Toppling onto Avi and effectively halting them both just short of the edge, she watches as the book slips from his hands and flies over the three-foot-high wall, pages flapping, to fall to the street below.

Before they can untangle themselves, Avi shouts, “You’re crazy! You’re trying to kill me!” At the sight of the maids running towards them, his indignation swells. “She tried to push me over the edge! She tried to kill me!”

“Look at her, she’s a lunatic! Trying to kill me!” Avi continues as the maids carefully stand the two up and brush them off, checking for scrapes. The smaller kids cluster around and shove each other to get a look, fingers in their mouths.

“She’s a lunatic,” one crows with delight.

Angrily, Nandini shoves a maid away and glowers at Avi. “He tried to get his hand under my dress,” she says in a quaking voice. Silence. The noise from the street below rises to fill Nandini’s ears. Open-mouthed, Avi stares.

Heart pounding, Nandini dares a look at Avi’s face. He is baffled more than defeated, staring at the maids as if they might turn back to him and say, “She’s pulling your leg, you badmash, she’s just joking.” But of course they don’t do anything of the sort, and Nandini walks away from Avi into the cool of the building, unable to say where her words originated or why a fiery, electric buzz has come to life beneath her skin.