The body needs a variety of nutrients to function optimally. Read on to learn about macronutrients and micronutrients, and how to meet your body's needs.
Source: Health Services 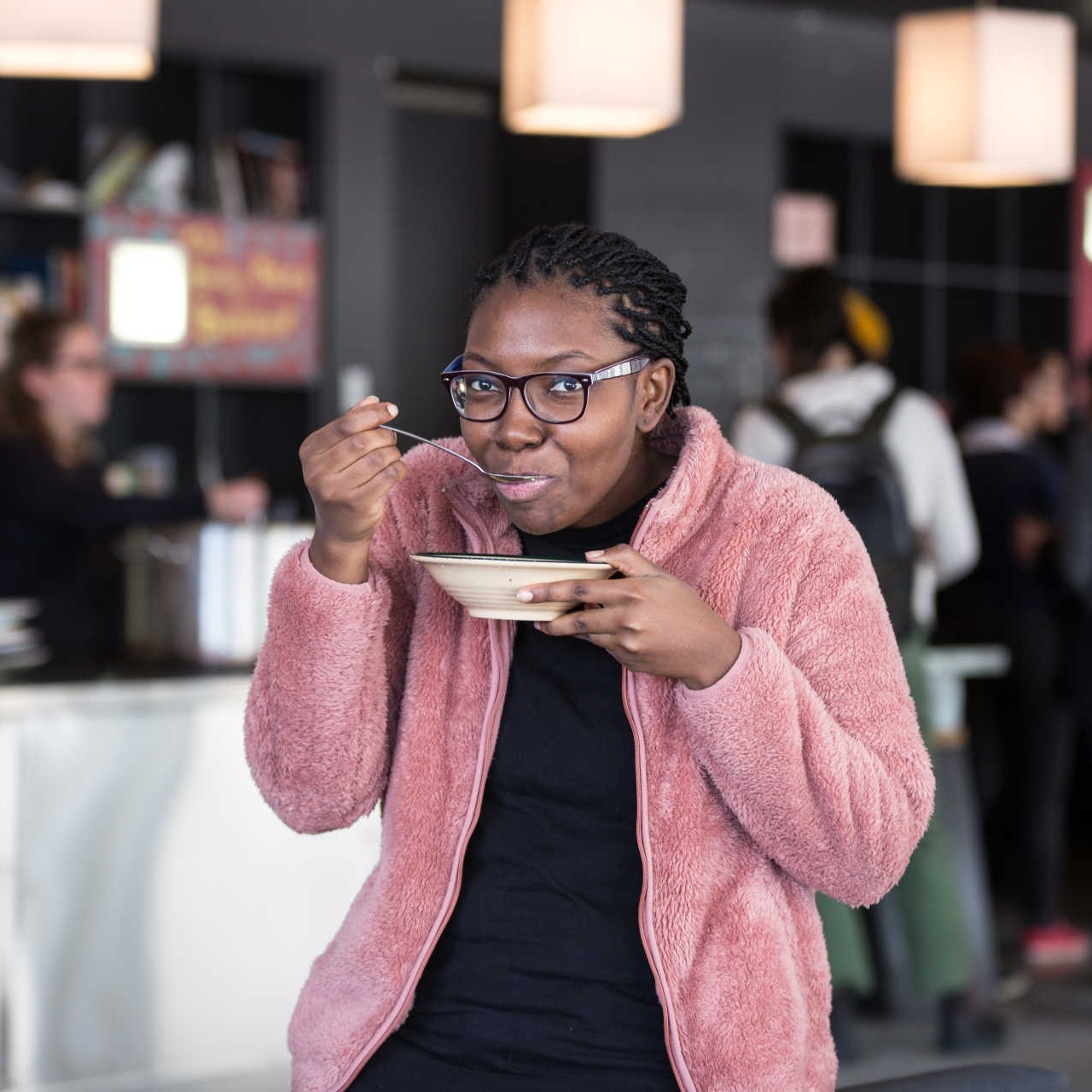 Simple carbohydrates, also called sugars, consist of one saccharide molecule or two molecules attached together. Their names usually end in "-ose" (e.g., glucose, sucrose and fructose). They tend to taste sweet. Sugars occur naturally in foods such as fruit, berries and milk. They are also found in concentrated amounts in table sugar, honey, maple syrup and molasses. Simple carbohydrates are small molecules so they are easily absorbed into the bloodstream and quickly raise blood sugar levels. A diet high in sugars contributes to weight gain, which is associated with diabetes, heart disease and other health problems.  Sugar also increases the risk for cavities.  Although there is no recommended amount for sugars in the diet, the consensus among nutrition experts is to limit "added" sugars. Added sugars include those found in processed foods (e.g., cakes), candies, soft drinks and sugary cereals as well as sugars that are added at the table (e.g., sugar added to coffee, tea or cereal). Several prominent organizations — including the World Health Organization and the American Heart Association — have issued recommendations to keep added sugars to no more than 10% of daily calories, preferably less. Based on a 2,000 calorie a day diet, this would translate to no more than 12 teaspoons of added sugar. Keep in mind that a 355 mL can of non-diet soft drink typically contains 10 teaspoons of added sugar!

The second type of carbohydrates is the complex carbohydrates, which are also called starches. They consist of many saccharide molecules linked together in chains. Because they are larger molecules, they tend to be absorbed more slowly and therefore keep blood sugar levels more stable. Sources of complex carbohydrates include grain products (e.g., bread, cereal, rice, pasta and oats), vegetables (e.g., potatoes, carrots) and legumes (e.g., peas and beans). Whole grains are an excellent option since they are not refined and retain much of their nutritional strengths.

Each gram of carbohydrates provides four calories of energy. It is recommended that the majority of our daily calories — between 50 and 65% — come from carbohydrates. If you eat according to Canada's Food Guide, you will meet your carbohydrate needs and the proportion of simple and complex carbohydrates will be favourable to your health.

Fibre is a type of carbohydrate that passes through the digestive tract without being absorbed. Therefore it supplies no calories or nutrients. It comes in two main forms: soluble and insoluble. Several health benefits have been associated with fibre consumption. They include a reduced risk of heart disease, diabetes, constipation and diverticular disease.

Fibre is found only in plant foods. It is recommended that adults consume a minimum of 20 grams of fibre a day from foods, not supplements. More is better. You can achieve this by following Canada’s Food Guide, which recommends a diet that is comprised predominantly of plant foods.

Many people choose foods that are prepared with artificial sweeteners because they taste sweet and have fewer or no calories. Several sugar substitutes are approved for use in Canada. They include acesulfame-potassium, sucralose and sugar alcohols (e.g., xylitol and mannitol). Research indicates that these are safe when consumed in low to moderate amounts. However, research has paradoxically revealed an association between the consumption of artificial sweeteners and weight gain. We are still learning more about the health effects of these substances. Ideally, it is best to avoid artificial sweeteners, but if you choose to consume them, keep the amount low.

Proteins build and repair muscles, skin and other tissues and are an integral component of hormones and enzymes, which regulate the body’s processes. Proteins are also essential for building the cells of the immune system. Proteins are composed of basic units called amino acids, which are linked together in various combinations to create thousands of different proteins. There are 22 amino acids, 13 of which are called "non-essential" because the body can make them. The other nine "essential" amino acids must come from the foods we eat since the body cannot make them.

Animal food sources of protein are referred to as "complete" protein because they contain all 22 amino acids. Sources include meat, poultry, dairy products, eggs and seafood. With the exception of soybeans and quinoa, all plant proteins lack one or more of the essential amino acids, so they are called "incomplete" proteins. Depending on the foods they include in their diet, some vegetarians and all vegans need to pay attention to the protein in their diet. Plant foods that contain a substantial amount of protein include beans, lentils, soy products (e.g., tofu) and nuts.

One gram of protein provides four calories of energy. In a healthy, balanced diet, protein should contribute 10 to 15% of daily calories. If you eat according to Canada's Food Guide, you will meet your daily protein requirements. Contrary to popluar belief, those seeking to build muscle do not need to consume a large amount of protein.

Fat stores energy, insulates the body and its organs, is a component of hormones and other important substances and provides essential fatty acids that the body cannot produce. It also transports the fat-soluble vitamins A, D, E and K throughout the body. High fat consumption is linked with cardiovascular disease and some cancers. The health effects are related to the type of fat in the diet, rather than the amount. However, since fat provides a concentrated source of energy, high consumption of any type of fat can contribute to weight gain, which increases the risk of many health problems.

Saturated fat has been dubbed "bad fat" because eating too much of this type of fat negatively affects blood cholesterol levels, which contributes to an increased risk for cardiovascular disease (e.g., heart attack, stroke). Saturated fat typically comes from animal sources and is often solid at room temperature. Sources include meat, lard, animal shortening and dairy products such as cheese, butter, sour cream and milk. Unsaturated fat has been linked to a reduced risk of cardiovascular disease, so it is often referred to as "good fat." Unsaturated fat typically comes from plant foods and is liquid at room temperature. Sources include olive oil, canola oil, soybean oil, peanut oil, avocados and nuts.

Fat is calorie dense. One gram of fat provides nine calories — more than twice the amount in proteins or carbohydrates. It is recommended that fat contribute 20 to 30% of daily calories in a healthy diet. Most of that fat should be the unsaturated type. If you follow Canada’s Food Guide, you will achieve these recommended amounts.

Trans fat is rarely found in nature: most of the trans fat we eat is man-made. It is created through a process called hydrogenation, where polyunsaturated oil is bombarded with hydrogen under high heat to create a solid. Research indicates that trans fat consumption increases the amount of "bad" cholesterol (LDL) circulating in the blood and may also decrease "good" cholesterol (HDL). This increases the risk for cardiovascular disease. Sources of trans fat include foods made with "hydrogenated" or "partially hydrogenated" vegetable oils such as snack foods, packaged baked goods and stick margarine, as well as some fast foods such as French fries. The amount of trans fat is indicated on a food label. It is best to avoid trans fat altogether. If you follow the recommendations of Canada’s Food Guide, your diet will be very low in trans fat.

Omega-3 refers to a specific type of "essential" fatty acid. The consumption of omega-3s has been associated with positive health outcomes, most notably a reduced risk of heart disease. There are three main omega-3s in the diet: eicosapentaenoic acid (EPA), docosahexaenoic acid (DHA) and alpha-linolenic acid (ALA). EPA and DHA are found mainly in cold-water, oily fish like salmon, sardines, mackerel, herring and trout. They appear to have the greatest impact on enhancing heart health. Consuming two servings of fish a week is recommended as part of a healthy diet. ALA is found in plants and is converted to EPA and DHA through an inefficient process, so the impact of ALA consumption on heart health is much less than that of EPA or DHA. The richest sources of ALA are flaxseed oil and flaxseeds. Other sources include canola oil, soybean oil, olive oil and walnuts. Omega-3s can be found in fortified foods as well as in supplements (e.g., fish oil). However, research shows that foods fortified with ALA (e.g., margarines) don’t have a positive impact on heart health.

You may have heard that you should drink "eight glasses of water a day," but there is no evidence to support this idea. Instead, your daily water needs depend on your size, activity level, the weather and what food and drinks you have consumed. Water needs are greater with increased physical activity and when the weather is hot. Unlike the other nutrients, there is no recommended daily amount of water that we should consume. Men should aim for 3.5 litres a day and women should aim for 2.75 litres a day. Obviously you will need more if you are active or if the weather is hot.

Canada’s Food Guide recommends that you make water your drink of choice. Although all beverages contain water, many also contain other nutrients that can negatively affect health when consumed in large amounts. Non-diet soft drinks, fruit flavoured drinks and sweetened hot and cold drinks contain a lot of sugar and calories. Drinking a lot of these contributes to an increased risk for overweight and diabetes.

Lab tests show that the quality of tap water and bottled water are the same, so take advantage of the water stations on campus and fill your reusable water bottles and help save the environment — and some money — along the way.

A comprehensive review of vitamins and minerals is beyond the scope of this website. You can easily find information online, including a summary chart, if you are interested.

If you follow the recommendations in Canada's Food Guide and enjoy a variety of foods, you will meet your vitamin and mineral needs.