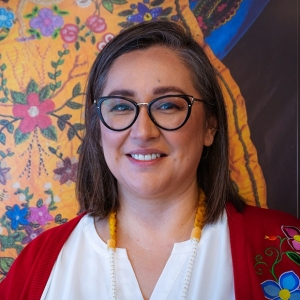 Mandy Gull Masty, Grand Chief of Cree Nation of Eeyou Istchee, was inspired to devote her career to public service by her mom, who worked at the Waswanipi band office.

“I envisioned following in her footsteps. I spent the majority of my career in administration, then worked my way to the legislative level,” Gull Masty says.

After earning degrees in political science and community, public affairs and policy studies, she founded a management consulting firm before running for office. Gull Masty was elected Deputy Chief of Waswanipi, then Deputy Grand Chief of the Cree Nation Government.

Gull Masty was the first woman elected Quebec Cree Grand Chief in 2021. She recently met with Pope Francis at the Vatican as part of the Indigenous delegation addressing the Catholic Church’s role in the residential school system’s harrowing legacy.

“I'm an environmentalist and our culture is so closely linked to the land. As Deputy Grand Chief, I was part of a team that was able to secure 20 per cent protection of our traditional territory.”

On being the first woman elected Grand Chief

“I was able to pursue this path because it was blazed by women before me. I may be the first elected Grand Chief, but we've had other women run for office. I think that it was their punching the glass ceiling that ultimately allowed me to be elected.”

“Concordia had a major influence on my career. It was an environment where I felt people were socially conscious and environmentally aware, and really pushed initiatives that fell within those realms.”

“I come from a family of traditional crafters, and I really enjoy making beaded jewelry. The pandemic allowed many people to pick up a new hobby. Mine was going back to my roots by practicing beading. I have a beading page called House of Eeyou and was invited to Indigenous Fashion Week as a marketplace presenter.”

Reflections on meeting with Pope Francis

“The Pope did make an apology, but he needs to do more work to understand the colonial impact of what the residential school system did to Indigenous peoples.”