‘As a foreign student, I was given an opportunity,’ says Paul Hwang
|
By Ian Harrison, BComm 01
Source: University Advancement 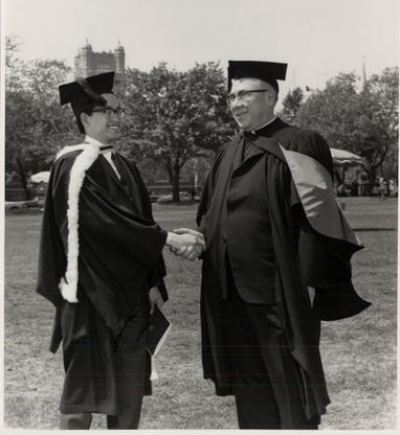 A nurse on the wrong side of Mao’s Communist revolution risks it all to flee China and find refuge in Hong Kong and, later, Singapore.

Her efforts to safeguard her six children — only four of whom survive infancy — change the fortunes of her descendants in ways she can scarcely imagine.

This story is at the heart of a generous planned gift made to the Campaign for Concordia by Toronto neurologist Paul Hwang, BSc 70.

When Hwang emigrated from Singapore to attend Loyola College, one of Concordia’s two founding institutions, he did so with his mother’s fervid encouragement and some added pressure, too.

“Failure was not an option,” Hwang recounts. “My mother had made tremendous sacrifices to ensure we had an education.”

Hwang arrived in Montreal on October 2, 1966, with $100 in his pocket. And while the help of a Jesuit guidance counsellor with the Diocese of Singapore facilitated his introduction to Loyola, he knew no one at the college.

In some ways, the strict Catholic schools he attended back home prepared him well.

“There was a proctor at Loyola who lived with us in residence,” Hwang recalls. “He had the corner room and he turned off all the power at 11 p.m. We could not even light a candle to read! Mealtimes were strictly regulated, too.

“But I thrived under that disciplinary system. I loved Montreal and thought Canada was the most beautiful country in the world.”

‘Loyola opened up so many doors’

To make ends meet, Hwang took a job as a busboy on campus. He quickly distinguished himself in the classroom. By the end of his first term, he was the top student in his faculty and was awarded a full scholarship, which he maintained throughout his four years of study.

This kind of support is what Hwang wants to honour with his bequest to advance science students at Concordia.

“I was fortunate to have support from a variety of sources as an undergraduate. As a foreign student from Singapore, I was given an opportunity to be successful. How could I not provide the same opportunity to students at Concordia now?”

When he graduated from Loyola in 1970, Hwang was awarded Quebec’s Minister of Education Silver Medal, given to the student with the best overall average in the sciences. In a photo taken at convocation, Hwang’s smile is exuberant.

“It was a big moment for me. I was the first to come to Canada and make it. And then, one by one, the rest of my family moved here — my mother included. I was the pioneer and Loyola opened up so many doors.”

Hwang went on to share the Williams Prize in Medicine at McGill University as one of the top students in the faculty. Next, he obtained his MSc from the University of Toronto.

With Hwang’s mother by their side in Canada, his sister and two brothers thrived as well. Andrew Hwang, BSc 71, for one, also attended Loyola, graduated with a PhD in physics from the University of Toronto and conducted research on nuclear fusion at Oxford.

“Not bad for someone who failed math in Singapore,” his older brother proudly teases.

At McGill, a network of mentors led Hwang to neurology. Over the course of his long career he has made tremendous strides in the field, notably in the realm of childhood epilepsy.

Many of the Concordia donor’s proudest accomplishments have to do with his impact as a supervisor of medical students. As a respected researcher, Hwang has also been widely published.

“Nothing to write home about, no Nobel prize,” the recently retired doctor laughs. “But I did win the Herbert Jasper Prize from the Canadian Society of Clinical Neurophysiologists.”

None of these achievements would be possible, he stresses, without his family.

Hwang and his wife, Wai Chin Hwang, a McGill science graduate, have been married for 47 years. The couple’s five daughters — Christine, Irene, Pauline, Amy and Julie — were gifted students themselves who went on to become successful professionals (“To my disappointment, none of them a neurologist,” jokes their dad). Seven grandchildren also keep the Hwangs busy these days.

Faith has been the other anchor in Hwang’s life, ever since his mother converted the family to Catholicism in Hong Kong decades ago.

In his daily devotions Hwang often thinks about his mother, who passed away in 1990, and the desperate choices she made a lifetime ago to pave the way for her children and grandchildren.

“The personal setbacks she faced, the separation from our father. Through it all, her focus on higher education is what made the difference. She has been the greatest influence in my life.”

Join Paul Huang's support of the next generation by learning about planned giving at Concordia.