Jim Donaldson (1937-2021): architect and past president of the Loyola Alumni Association 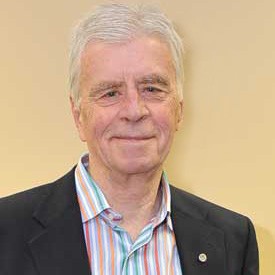 Jim Donaldson, BSc 52, who contributed to the revival of Loyola Campus as a standout alumnus of Loyola College, one of Concordia’s founding institutions, died on November 12. He was 88.

“Jim was a champion of our university who truly represented the service-oriented spirit of Loyola College,” says Paul Chesser, BA 94, GrDip 97, vice-president of Advancement. “As a volunteer with the Loyola Alumni Association [LAA], where he served as president and a long-time member of the board of directors, Jim helped strengthen scholarships for students as well as efforts to refurbish the Loyola Refectory.”

The result of those efforts was the inauguration of Loyola Jesuit Hall and Conference Centre in 2012, which helped launch a transformative new era for Loyola Campus and Concordia.

“Jim was a wonderful guy, who always had a great sense of humour and a twinkle in his eye,” recalls Donal Ryan, BComm 67, Donaldson’s successor as LAA president who later oversaw the LAA’s merger with the Concordia University Alumni Association in 2014. “He was a lot of fun to be around.”

Dominique McCaughey, BA 96, MA 02, former associate vice-president of Advancement and Alumni Relations at Concordia, got to know Donaldson through his work on the Refectory Campaign Committee and remembers him as a forward-thinker who was passionate about his alma mater.

“Jim was limitless in his energy, dogged in his determination and seemed to know every Loyola graduate,” says McCaughey. “He had a knack for bringing people together and his love for Loyola Campus was without bounds — he felt that it held much potential for Concordia’s future.”

Donaldson was honoured with the Benoît Pelland Distinguished Service Award in 2009 for his dedicated service on behalf of Concordia.

A native of Revelstoke, B.C., James M. Donaldson grew up in Montreal. He graduated from Loyola High School and then, in 1952, Loyola College.

After a stint in sales, Donaldson pivoted to architecture at McGill University, where he earned his degree in 1962.

His architecture career began at ARCOP, a Montreal-based firm, and later blossomed when he co-founded Donaldson, Drummond and Sankey in 1964.

Donaldson’s firm enjoyed success with projects like the Pavilion of the State of New York at Expo 67, the Town of Mount Royal Library and commissions for Bank of Montreal and Bell Telephone Company.

In an interview conducted by Donaldson in 1999, fellow Donaldson, Drummond and Sankey co-founder Derek Drummond recalled why it made sense to start the firm, even as relative novices.

“That was probably the biggest boom period in the history of Montreal. There was a shortage of architects. We had a way of turning out good products, some good buildings and I’m proud [of that].”

Donaldson left private practice in the 1970s to oversee worldwide project design and construction as a director for Air Canada.

After his retirement from the company in the mid-1990s, Donaldson worked briefly for Star Alliance and represented Air Canada throughout the construction of the Air Canada Centre in Toronto.

Donaldson was elected a Fellow of the Royal Architectural Institute of Canada in 1987. He volunteered his time and expertise extensively, notably as president of the St. Patrick’s Foundation Board, a member of Loyola High School’s expansion committee and a member of the committee to develop the campus of St. Mary’s Hospital in Montreal.

A funeral service will be held in the spring.