How Concordia prepared Sherry Romanado for a life in politics

Concordia’s Executive MBA program taught Sherry Romanado, EMBA 11, “the importance of believing that anything is possible, regardless of your background.”

After Sherry Romanado graduated from Concordia’s Executive MBA program (EMBA) in 2011, she soon put her myriad newfound skills to use: she was elected to Canada’s House of Commons in 2015 as Liberal MP for Longueuil-Charles-LeMoyne.

Romanado hadn’t really expected to accomplish either achievement. Growing up in Montreal’s South Shore suburb of Greenfield Park, a non-traditional path led her to pursuing an EMBA.

Instead of CEGEP, she did a vocational studies diploma (DEP) in secretarial studies and, while working in administration at McGill University, picked up a Certificate in Public Relations at its School of Continuing Education. She was also busy raising a family of two children with her husband, Chris Morgan — so the one-full-day-a-week scheduling of the EMBA program was a huge plus.

Romanado remained at McGill for some years before moving on to work as assistant director of continuing education at a South Shore CEGEP, while starting to teach public relations at McGill. 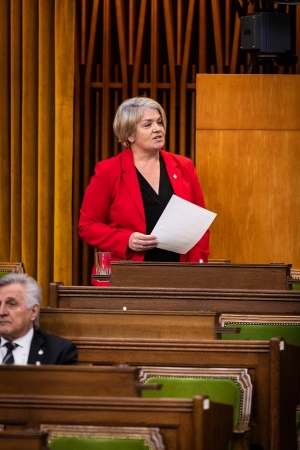 Romanado was elected to Canada’s House of Commons in 2015.

Then her life really changed.

“The 2015 federal election came calling, and I decided to pursue office — and I was delighted to win!” Romanado, who had been interested in politics since the late 1990s, got herself organized, was busy serving on parliamentary committees and then, in early 2017, got a call from Prime Minister Justin Trudeau. Would she like to take on the role of Parliamentary Secretary to the Minister of Veterans Affairs and Associate Minister of National Defence? As the mother of two now-adult sons who both serve in the Canadian Forces, she would like that very much.

At the end of August 2018, Romanado was named Parliamentary Secretary to the Minister Responsible for Seniors, a position that lasted until the 2019 general election was called in September. She is at present chair of the Standing Committee on Industry, Science and Technology.

‘You learn to focus on what’s important’

In that EMBA toolbox were skills and knowledge Romanado would find useful: a broader understanding of the world of finance, budgeting and planning, and learning more about how to manage staff, resources and materials — all of which she believes help her to be a better MP in terms of managing the public purse.

“Being able to use those skills obtained during my EMBA has been very helpful,” she says — especially setting up offices in her constituency and on Parliament Hill, hiring staff and managing a budget, along with demanding schedules in both Ottawa and the constituency. The skill set has also helped her understand and explain federal budgets and other financial matters, despite not having a purely business background.

The most important thing she learned? “I would say time management,” she says. “When you’re studying full-time, working full-time and juggling course work, group work and a family, you really learn to focus on what’s important, get to the point and get it done.”

Romanado has high praise for her “fantastic” professors, not wanting to single any out, as well as her fellow students, many of whom she is in touch with today. The 25-student cohort determined that they would start as a group and finish as a group. “We would not leave anyone behind,” Romanado says. “I thought that was very special.”

Romanado is not sure what her future holds, but she is certain that the EMBA she earned at Concordia leaves her well equipped to face it.

Her EMBA experience taught her one other thing.

“It taught me the importance of believing that anything is possible, regardless of your background.”

Founded in 1985, the John Molson Executive MBA program — the first of its kind in Quebec — was created for executives, entrepreneurs and professionals with considerable business experience, to develop into leaders who flourish in times of ambiguity and fast-paced change.The program is designed to broaden individuals’ knowledge to develop a more integrated or bigger-picture perspective typically associated with senior leadership.