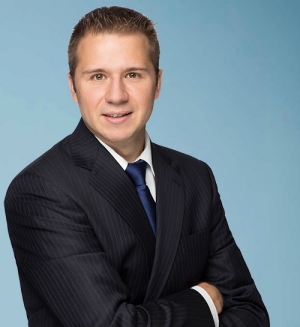 As an assistant vice-president at Fiera Capital in Montreal, Thomas Horvath, BComm (finance) 09, helps manage a portfolio of global equity assets worth more than $40 billion.

It’s a role he was primed for.

“My mother worked at McLean Budden, an investment management firm,” says the graduate of Concordia’s Kenneth Woods Portfolio Management Program (KWPMP). “When I was five years old I would tell the lead portfolio manager that I would be in his office one day. I was also one of the few who could explain to his first-grade class what a mutual fund was. I was passionate about finance at a very young age.”

Horvath’s parents, Sam and Elizabeth, met in Quebec as émigrés from Hungary. Circumstances compelled both of them to defer school and enter the workforce as teenagers.

“My parents knew the importance of money and tried to teach me and my brother early on. They had a special agreement with us that any money we received at Christmas or for our birthdays, we could either spend on toys or invest at double the amount. My parents came to Canada with basically only their suitcases, so I think it was critical for them to teach us about compounding your money and learning how to save.”

‘It’s important for everyone to be doing their part’

Not only did Horvath heed the wisdom of his parents, he plotted a course to become an investment professional himself.

When Bill Healy, BComm 95, a colleague of his mother’s and a KWPMP mentor, told him about the program, Horvath jumped at the chance to enrol at the John Molson School of Business (JMSB) after CEGEP.

As an undergraduate, he looked for every opportunity to elevate himself, whether in the classroom, on work terms at the Institute for Co-operative Education, as president of the John Molson Competition Committee or as a KWPMP research associate and fund manager.

Two professors, in particular, made his experience a memorable one.

“Abraham Brodt, former KWPMP director, was very passionate about the program and demonstrated how much good you can do when you help others. Mark Haber [BComm 71] also impacted my life significantly. He lived and breathed the case competition program.”

After Concordia, Horvath enrolled at Queen’s University as a full-time employee at Fiera Capital to secure his MBA at the Smith School of Business. He also completed a Certificate in Responsible Leadership from the university’s Centre for Social Impact.

Horvath’s tenure at Queen’s was further marked by what some refer to as the “Nobel Prize for students.” With two of his classmates, Horvath represented Queen’s at the 2016 Hult Prize competition — the largest international competition for social impact — in San Francisco.

“We presented a concept to solve the problem of open defecation and sanitation in India, which would save many lives and billions of dollars in annual health costs.”

‘The school has given me so much’

When Horvath was hired at Fiera Capital, he joined a team that ran under $100 million of assets. Almost 11 years later, the team has grown from five to nine people — fellow KWPMP alums Ivana Miladinovic, BComm 10, and Ayssar Nasrallah Fernandez, BComm 17, included — runs over $40 billion and is one of the largest of its kind worldwide.

Horvath credits his portfolio manager and mentor, Nadim Rizk, with a lot of his professional success.

“Nadim has had such an impactful result on my professional career. He taught me virtually everything I know about quality investing. To become a good investment manager you have to immerse yourself in the world of investments. It takes a lot of hard work and commitment.”

As he has risen the ranks at Fiera Capital, Horvath has made an effort to combine his interest in Environmental, Social and Governance (ESG) finance with the day-to-day reality of investment management.

“Our job is to create value for our clients. Environmental, ethical, corporate and social responsibility, all of that makes up part of our research and investment process. It’s not uncommon that I have discussions with CEOs and chairmen of Fortune 500 companies on these ESG issues.”

Despite the demands of his career, Horvath has consistently found time to give back to his first alma mater. He volunteers as a case competition coach and co-lectures an investment course for KWPMP members and other JMSB students.

Beyond the professional advantages the Woods program has afforded him, Horvath has another daily reminder to feel good about his JMSB experience. His wife, Sandy Poiré, BComm 10, a CFA charterholder and fellow Queen’s MBA, is a Woods alum, too.

Poiré, JMSB’s 2010 valedictorian, works as a senior investment officer at CN Investment Division. The couple met at Concordia and have a daughter who recently celebrated her first birthday.

“When I say I’m very appreciative of the Woods program, it’s personal development, career development but also my family,” says Horvath. “The school has given me so much — that’s why it’s important for me to give back.”