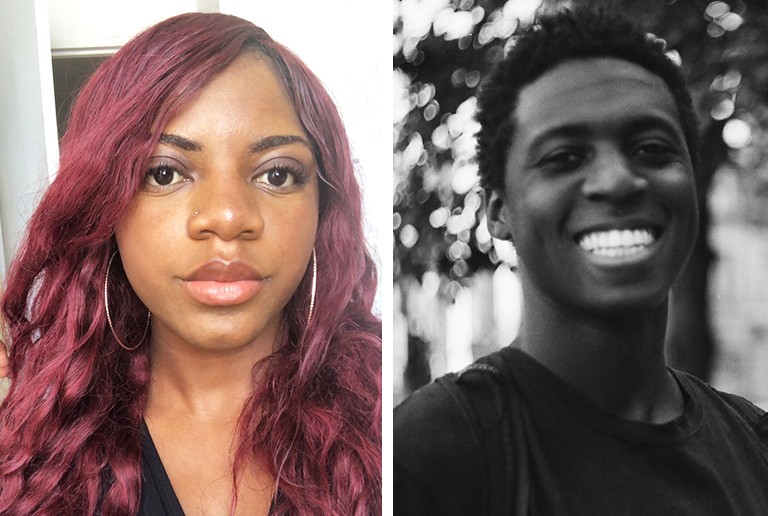 Astrid Aguy and Jonathan Dessalines. “I’ve learned a lot of things and I practice every day.”

Two Concordia students are among the top 10 contestants in the fourth annual Délie ta langue! francophone public-speaking competition organized by Université de Montréal. Astrid Aguy and Jonathan Dessalines, both third-year undergraduates, will take part in the finals that will stream live on March 28.

“The entire faculty is proud to support our two finalists Astrid and Jonathan,” says Pascale Sicotte, dean of the Faculty of Arts and Science. “The support they received is extraordinary and is already reaping rewards since they now find themselves in the finale.”

Concordia is Quebec’s first anglophone university to participate in the wildly popular contest, which is financially supported by the Office québécois de la langue française. It’s part of its Le français, au cœur de nos ambitions — French, the heart of our ambitions — program.

“Université de Montréal invited us to take part and we are delighted two of our students are in the finals,” says Chanel Bourdon, coordinator for promotion et valorisation de la langue française in the Département d’études françaises.

Last autumn the university recruited four semi-finalists, who were then offered five workshops to hone their public-speaking skills, including training with alumni of Concordia’s Department of Theatre. “Then an internal jury selected two finalists to represent Concordia,” Bourdon explains.

“Alumni from our Acting program are particularly well-suited to coaching public speaking, because so many aspects of an actors craft can help speakers a lot,” says Annie Gérin, dean of the Faculty of Fine Arts.

“Acting is all about knowing how to connect well with your script, and bring it to life in ways that resonate with audiences. Actors know how to use their non-verbal tools — tone of voice, gesture, rhythm, eye contact — in impactful ways.”

Aguy is a political science student. The French expression she has chosen for her entry is « Avoir les yeux plus gros que le ventre » — “Having eyes bigger than your stomach.”

“While public speaking was out of my comfort zone, as a French speaker I really wanted to get involved in the competition, and the experience so far has been very rewarding,” Aguy says.

Meanwhile, the French expression that anthropology undergrad Dessalines has chosen for his entry is « Se tirer une bûche » which translates into “pull up a chair or a log of wood and take a seat.”

“I’m taking part because I wanted to put myself out there and give myself a challenge,” Dessalines says. “I’m very excited — I’ve learned a lot of things and I practice every day.”

Thousands of dollars in prizes

“I encourage everybody to check out all of the finalists on the Délie ta langue! Facebook page because the audience will vote for the public prize,” Bourdon says. “Please do support the contest and the finalists. We are rooting for Astrid and Jonathan, who have both made Concordia very proud.”

The Délie ta langue! grand finale will be held on March 28 at 4 p.m. It will be streamed free of charge, upon registration, at tinyurl.com/DTL-Presse or delie-ta-langue.ca.