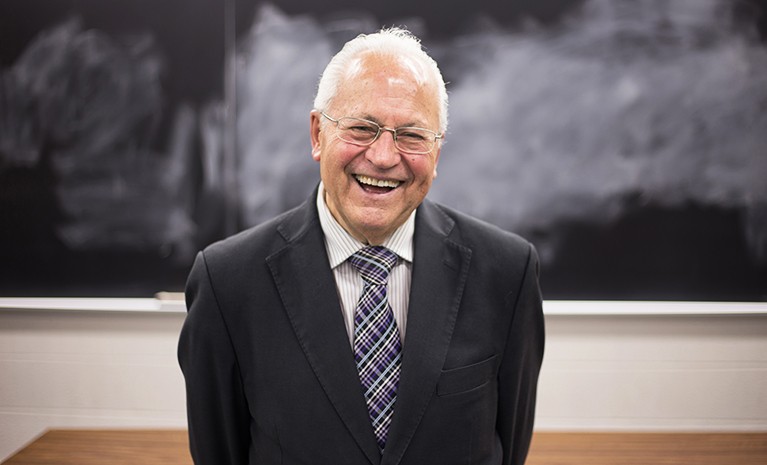 Anthony Costanzo, a Concordia professor of classics, modern languages and linguistics for more than 50 years and former president of the Concordia University Faculty Association, died in Montreal on June 17.

Costanzo first taught Italian in the Linguistics and Modern Languages Department at Loyola College, one of Concordia’s founding institutions, in 1968.

He became an associate professor in what is now the Department of Classics, Modern Languages and Linguistics at Concordia in 1980. His research interests included the Italian language and literature of the Middle Ages and Renaissance.

Costanzo officially retired in 2008 but continued teaching until this year.

Born in Italy in 1938, Costanzo arrived in Canada with his family in 1951. In a touching video testimonial he made in 2018 to explain why he made a planned gift to Concordia, Costanzo recalled how he considered dropping out of high school.

“My mother said to me, ‘You don’t want to go to school? One day you will regret it.’ This pushed me,” he recounted.

Costanzo instead advanced academically, earning an MA in romance languages from the University of Washington in Seattle in 1964 before returning to Montreal and eventually joining Loyola.

“Throughout my career, others inspired me, pushed me, to aim higher,” Costanzo said in the video. “Over the years, I must have had thousands (of students). If we help students today, they will help us tomorrow. And they will help change the world tomorrow because having an education is the passport to a better life.”

“Tony took CUFA’s responsibilities as a union very seriously,” says Charles Draimin, professor of accountancy at the John Molson School of Business and a CUFA member-at-large.

“Whether the issue was contract negotiations, salary issues or defending individual faculty members, Tony’s was a powerful voice. He made a vital contribution to CUFA’s mission and activities.”

Dario Brancato, a Concordia professor of classics, modern languages and linguistics, remembers his late colleague fondly. “I met Tony Costanzo when I first started at Concordia in 2005. I was fresh off my PhD, while he had already been teaching for several decades,” Brancato says.

“While at Loyola College, he was one of the faculty members who consolidated the Italian language courses into a full-fledged undergraduate program; as a result, he knew not only our department but also the university inside out,” he says.

Brancato relates that when he was doing research on the history of the Italian program at Concordia, he discovered that the archival material was sparse.

“I asked Tony to fill the gaps in the narrative, and the connection between events that seemed to me unrelated. He remembered even the slightest detail of people, facts and events very distant in the past. He was like a living archive,” Brancato says.

“I will miss my conversations with him in his office about his three passions: Italian culture — especially winemaking — teaching and Concordia, a place that was his element, and that he served until his death.”

Learn more about planned giving at Concordia and how the university provides support in times of need.