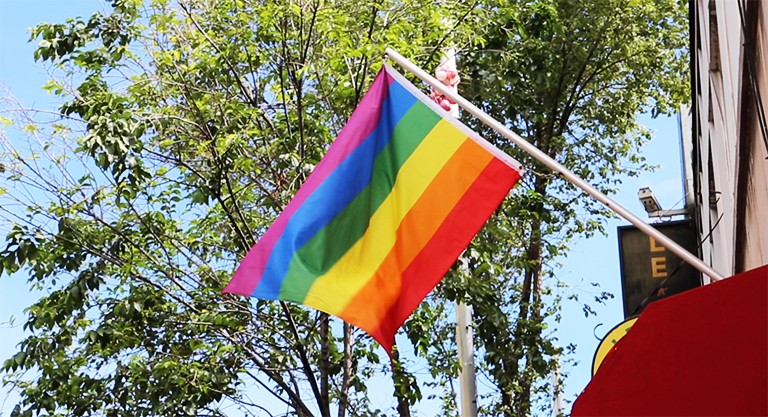 While much of the country celebrates Pride in June, Montreal’s 2SLGBTQI+ festival has always taken place later in the summer. Following an online program to comply with Quebec’s health and safety measures last year, the 2021 edition is offering a hybrid version, with many live events including the flagship Pride March.

For those who opt not to participate in person, many panels, DJ sets and performances will also be streamed via Zoom, Twitch and MaTV.

Catch the opening ceremony live at Cabaret le Lion d’or featuring Jeremy Dutcher, an award-winning Two-Spirit musician from Tobique First Nation in New Brunswick. Dutcher is known for blending his classical opera training with his Wolastoq roots to produce beautiful and haunting compositions. The event takes place on the International Day of the World’s Indigenous Peoples and marks the kick-off of the hybrid festival. The show will also be broadcast live.

When: August 9 at 8 p.m.
Where: Live from Cabaret le Lion d’or | Online via Facebook

2. Discussing diversity in the 2SLGBTQI+ community

The following day, join the Bibliothèque et Archives nationales du Québec in a virtual roundtable conversation that will focus on multiple identities and embracing diversity among the 2SLGBTQI+ community.

4. Beach volleyball in the park

There will be a community beach volleyball tournament on August 14 open to everyone. There is a 60-person capacity and participants will be divided into teams of six. In order to respect the current sanitary measures, you must complete this online form prior to attending the event.

The annual Pride March will close out the celebrations on the final day of the festival. Advance registration is not required. The march will head south on Parc Avenue, heading toward René Lévesque Boulevard and east toward Atateken Street. The final destination is Montreal’s Gay Village in Centre Sud.

The march will be followed by a moment of silence for victims of HIV/AIDS and acts of homophobic violence. Organizers welcome all banners, decorative signs and streamers so long as they respect the safety of others.

Watch journalist and Concordia alum Richard Burnett (BA 88) make stops around the city to share Montreal’s rich queer history. In fact, you’ll spot some familiar buildings — including Queer Concordia’s offices on Mackay Street that have been around since 1978! Also on the tour: the Lime Light, the Tropical Room — where gay men were first allowed to dance with each other in 1958 — Café Cleopatra and, of course, Théâtre National, originally called Cinéma du Village, which is where the Gay Village got its name.

ALSO CHECK OUT: a number of community events taking place outside of the official Montreal Pride programming, including the August 7 Trans March and the alternative event series Pervers/cité: the Underside of Pride, August 21 to September 12.