‘It’s a team sport. No one is left to fail, and everyone is there to support each other’
|
By Taylor Tower 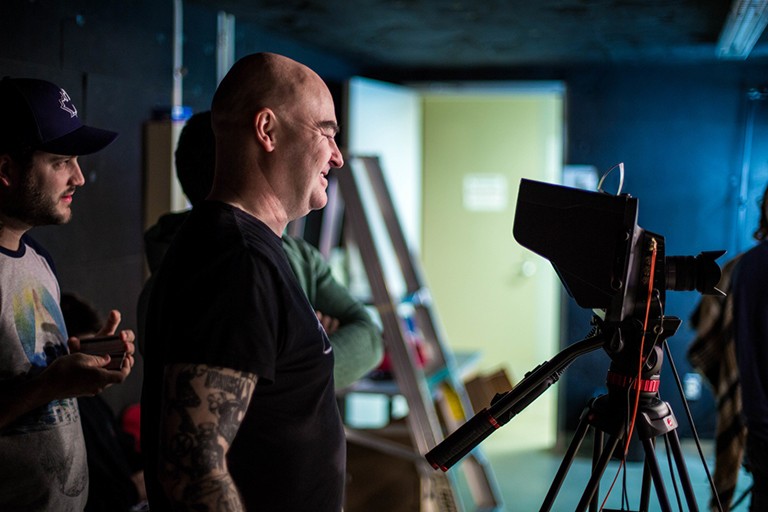 Paul Gott, lecturer in Concordia’s Department of Journalism, says his students have gone above and beyond despite the challenges presented by the ongoing COVID-19 pandemic.

“There have definitely been some memorable moments — like when a student in Tel Aviv was acting as assignment editor, working with a reporter in a remote village on the coast of Alaska, to produce a local Montreal story,” he recounts.

Gott structures his Concordia video journalism and radio newsroom courses like a professional newsroom. Radio students produce an entire, original newscast each week, within three hours, made up entirely of original stories that broke in the last 12. Students in his TV course have more time but are also chasing original stories remotely.

“It’s a pressure-packed experience,” Gott says. “But I try to instill in my students that journalism is a team sport. No one is left to fail, and everyone is there to support each other.”

He notes that not only is the students’ work high quality but they’re beating major media outlets to breaking stories. “We reported Verdun being named one of the world’s coolest neighbourhoods seven hours ahead of other media.”

‘More engaged than ever before’

Fenn Mayes is a student in Gott’s radio broadcasting course. He began his Graduate Diploma in Journalism studies in June 2020 and is set to finish in April 2021, meaning his entire program will be completed virtually.

“Because we’ve had to go online, it’s motivated us to create more concrete communities for exchanging ideas and supporting each other, like Facebook groups, forums and email and just checking in by phone,” Mayes says.

As people have become more accustomed to video-conferencing platforms, it’s been much easier to book interviews with experts from a wide range of fields, he says. “One of my highlights was being able to speak with a pediatric infectious disease specialist.”

Mayes adds that it’s crucial to find time to step away from the computer by using the phone and taking notes by hand. “Take advantage of the support and resources available and don’t hesitate to reach out to your classmates and your professors,” he says.

Students don’t currently have access to the department’s studios and equipment. In response, instructors A.J. Cordeiro and Cristina Sanza spearheaded the creation of a resource document with free and low-cost software, apps and gear organized by course and categorized by video, print or photography. The resource list has evolved significantly since the initial lockdown in March.

“We compiled the best tools in mobile journalism at the lowest cost. Because of the pandemic, we had to break our old paradigms and seek out programs that would work on PCs and Macs as well as a variety of operating systems,” explains Cordeiro, the department’s multimedia instructor.

Sanza adds that the resources they’re compiling now will continue to support students in the future. “The fundamentals of journalism don’t really change,” she says. “The way we do things might, but reporting is reporting.”

Cordeiro has noticed fewer technical questions than in previous years and credits the video tutorials and drop-in Zoom sessions with giving students a focused place to explore the material and make mistakes in a judgement-free setting.

“I think it’s easier to be distracted during in-person presentations, whereas online sessions are just me and the student figuring things out together with practice files,” she says. “It makes them more comfortable trying new things.”

‘A magical moment when everything came together’

Fourth-year j-school student Pamela Pagano, who is taking video journalism with Gott, says remote learning has at least one benefit. “I got to discover the possibilities my iPhone, iMovie and my own microphone are capable of. It’s challenging but great practice for the future.”

Pagano recalls how happy she was with the quality of her class’s first newscast. “Given that we all worked on this remotely, it was like a magical moment when everything came together.”