Carolina Willsher: “We enjoy a relationship that has held us in good stead”
|
By Theresa Knowles 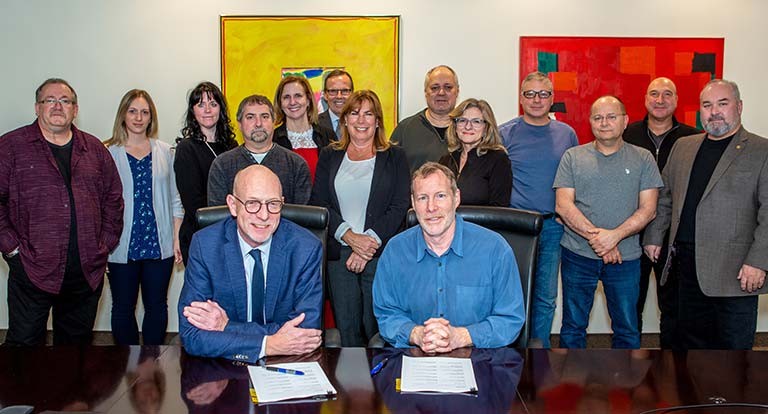 “Thank you, everybody, for coming and for pausing for a moment to reflect on the success of this round of negotiations,” said Carolina Willsher, Concordia’s associate vice-president of Human Resources.

“I want to thank both teams who came together and who creatively found solutions to the issues we had on the negotiating table to get us to this point.”

Michael O’Hanley, principal delegate of the métallos union, added his assent. “Everybody did a great job. I think we were able to reach our goals and achieve what we were hoping to. I want to thank everyone for their great work,” he said.

Concordia President Graham Carr spoke of the effort from all employees involved in the bargaining process to set a good tone and tempo for labour negotiations.

“It’s a two-way street,” he said. “It’s important to be able to share ideas and express concerns openly.”

Willsher agreed that the union and the university enjoy a productive relationship. “That has held us in good stead and has brought us to where we are today,” she said.

Just before the group posed for the photograph, Carr added his thanks and expressed his and the university’s appreciation for the work of the facilities staff represented by métallos.

“Everybody believes in the greater goal of the university,” he said. “The university is in a good place right now because of the quality of the people who work here. Thank you for all the work that you do on behalf of the university.”