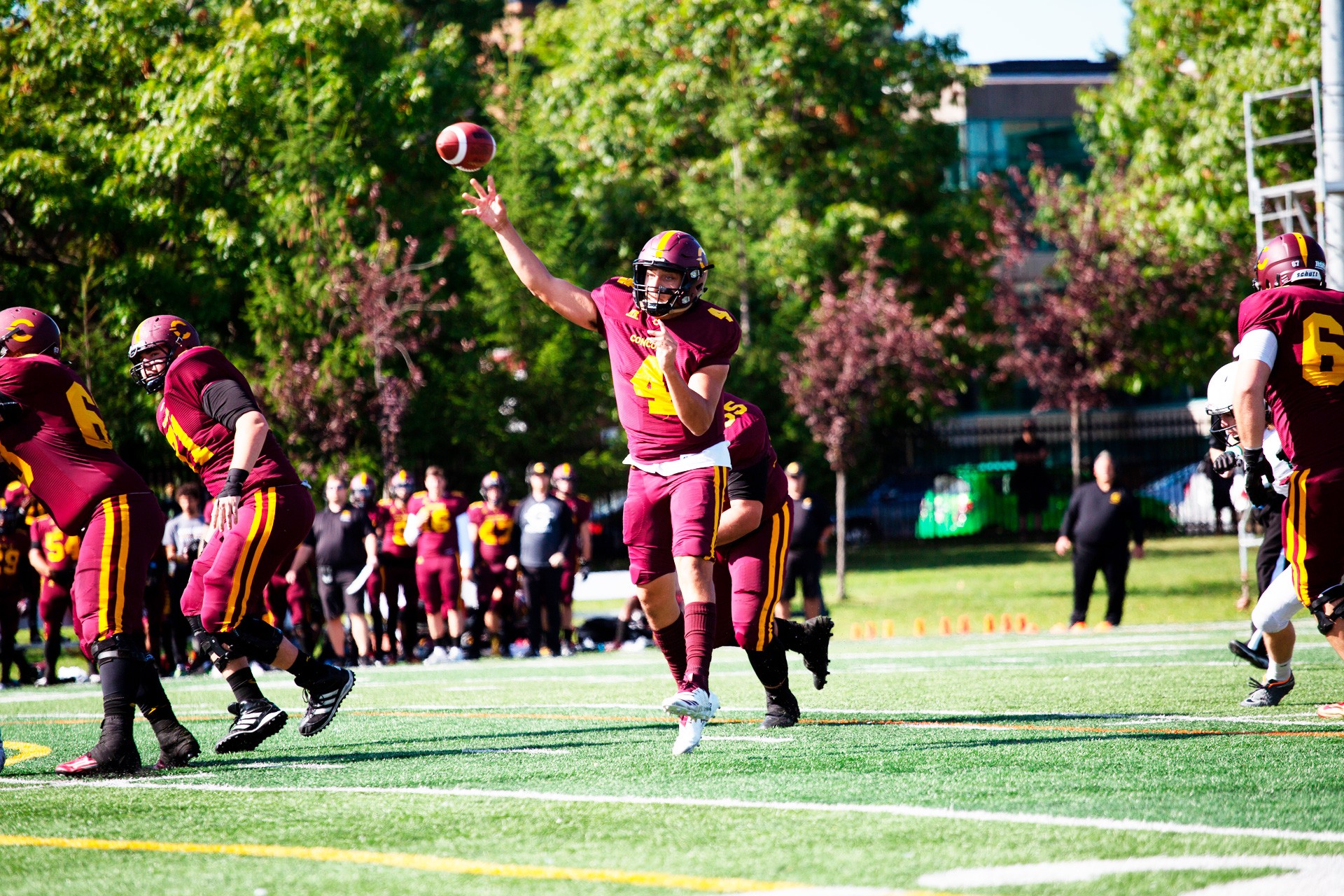 Whether you want to wear pink and gorge yourself on cupcakes, take photos with the ever-popular Buzz mascot or enjoy an intense crosstown sports rivalry, there’s something for everyone in the new Concordia Stingers Signature Series.

The eight-game package of the most exciting and hotly contested sports events of the 2019-20 season kicks off on September 21.

Each Stinger varsity team is featured in the Signature Series, which starts with the upcoming Homecoming football game. The Stingers are hosting the Sherbrooke Vert & Or, and there’s no doubt these two will be jockeying for a playoff spot.

The Alumni Zone will be in full swing, the 2019 Concordia Sports Hall of Fame inductees will be introduced at halftime and the game will be televised live on TVA Sports.

Up next is the Kelly-Anne Drummond Cup, an annual women’s rugby clash between the Stingers and the McGill Martlets, on September 29. This is one of the biggest draws of the year, with a large turnout of Concordia fans and members of the local rugby community.

The game honours a former Stinger who died tragically in 2004. Nevertheless spirits are high and camaraderie prevails. 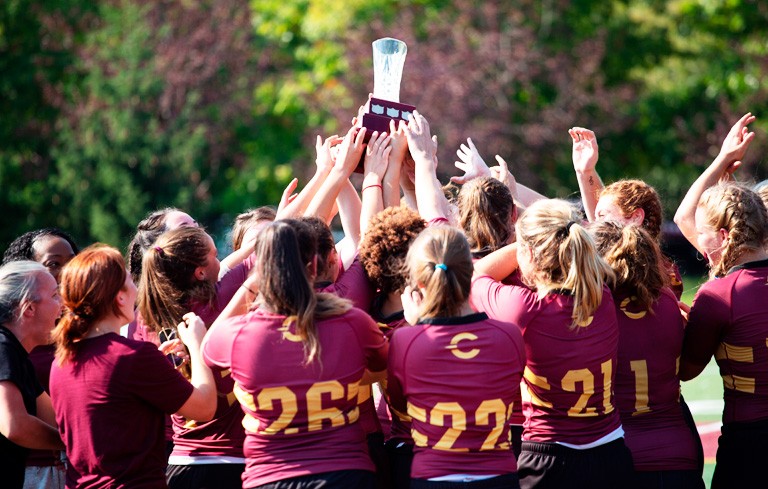 The Kelly-Anne Drummond Cup is an annual women’s rugby clash between the Stingers and the McGill Martlets.

On October 18, the Concordia men’s and women’s soccer teams play their most popular games of the year. They will host a doubleheader versus the Montréal Carabins.

This event pays tribute to Erica Cadieux, a former Stinger who passed away in 2006. The Stingers and members of Cadieux’s family rally around the event and collect toys for the Montreal Children’s Hospital in her honour.

If you enjoy hard-driving, rock’em-sock’em sports, then head over to the Ed Meagher Arena for the 33rd annual Corey Cup showdown on October 26. The Stingers and McGill will battle for men’s university hockey supremacy in Montreal.

The game always draws a raucous assembly of passionate hockey fans, who create a hyped atmosphere as the Stingers and their crosstown rivals go toe-to-toe for 60 of the most intense minutes in university sports.

This fall, rugby fans at Concordia will get to be a part of history when they rally around the Stingers on opening day of the Canadian University Men’s Rugby Championship. The hosts play their first game of the tournament on November 20 at 6 p.m.

This year marks the first time a Quebec university has hosted the national championship.

Concordia boasts one of the top university teams in Canada and will definitely be a favourite at the tournament. 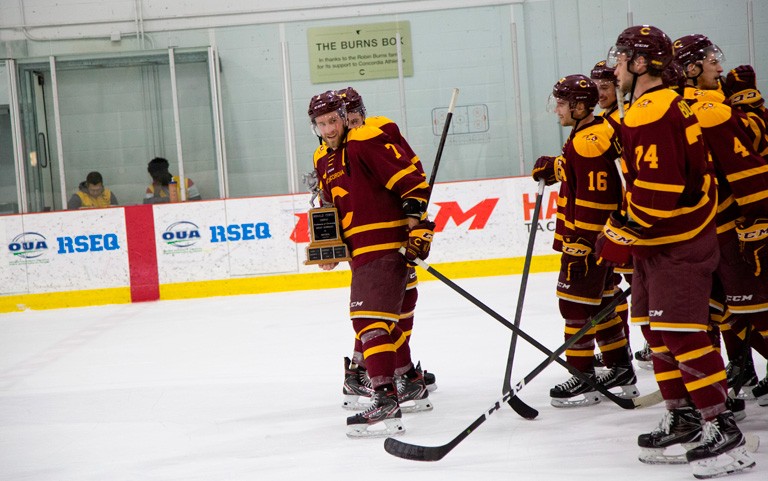 Shoot for the Cure and Pink in the Rink

Two popular annual events supporting the Quebec Breast Cancer Foundation will please sports fans in the winter term. The Stingers women’s basketball team’s Shoot for the Cure game against the UQAM Citadins will take place January 11, while the Pink in the Rink women’s hockey event will feature the Stingers and the McGill Martlets on February 8.

It’s a time to celebrate the strength and resiliency of the women in our lives.

These games are a lot of fun for visitors young and old. There’s always an unlimited supply of pink frosted cupcakes and other sugary treats. Pink T-shirts are on sale to help support the cause and there are usually a few other fabulous promotions.

On February 15 the Stingers are hosting the George Lengvari Cup for the first time. It's an annual rivalry game between the Concordia and McGill men’s basketball teams.

The inaugural cup was played at McGill last season, and the Stingers are thrilled to have their turn to honour Lengvari, who was a star player at both institutions in the 1960s. He has been a dedicated supporter of both programs ever since.

This game will likely be a sellout, as passionate students and proud alumni come out in force to cheer on the Stingers.

How to get your tickets

The Concordia Department of Recreation and Athletics has put together an exceptional ticket package for the Signature Series, with passes starting at $48 for students and $69 for adults. In addition to admission to the events, series pass holders will receive a rally towel, souvenir card, mug, bag and pop socket. If you can’t make all the events, tickets for individual games are also available.

So, grab your friends and neighbours, paint your face and get ready to cheer at the top of your lungs along with the rest of the university community during this year's Stingers Signature Series, sponsored by McKibbins. These eight games are a chance to take your Concordia super-fan status to a whole new level.

Check out the Concordia Stingers Signature Series web page for all the ticket and game details.