The results recognize advances in research income and activity, and the pre-eminence of JMSB master’s offerings
|
By Howard Bokser 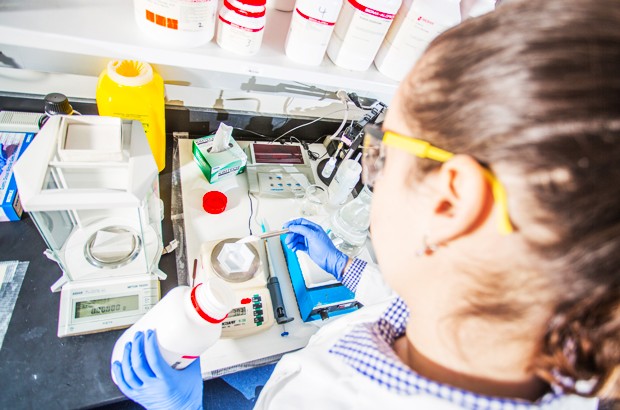 Concordia’s research community and John Molson School of Business (JMSB) graduate programs are among the country’s — and the world’s — best, according to recently released rankings.

In the 2018 Research Infosource list of Canada's Top 50 Research Universities, released October 25, Concordia placed in the 25th spot for the fourth straight time.

Research Infosource, a Canadian-based research, consulting and publishing firm, reported the university’s sponsored research income for the 2017 fiscal year at $53,099,000, a 4.5 per cent boost from the previous year.

Concordia placed eighth for sponsored research income among Canadian comprehensive universities. The category includes funds from external sources that come in the form of a grant, contribution or contract.

“Our success in improving our research income is the direct result of the university’s strategic direction to double our research,” says Christophe Guy, vice-president of Research and Graduate Studies. “The external funds secured benefit all of our research efforts.”

These figures generally come from Statistics Canada as reported to the Canadian Association of University Business Officers.

In the recently released 2019 Times Higher Education World University Rankings, the university improved its scores in four out of five pillars, including those directly related to research activity — research, citations and industry income. Concordia also saw gains in international outlook. The university moved down in the final category, teaching.

“Concordia’s goal of significantly increasing our research is already bearing fruit, and these results show that others are taking notice,” says Graham Carr, provost and vice-president, Academic. “We expect our research impact to continue to grow in the future.”

Concordia placed in the 601-800 category out of 1,258 universities worldwide. While this is a slight drop from last year’s position — when Concordia finished in the 501-600 group — the total number of institutions that the World University Rankings consider has been steadily rising each year, with 156 added for 2019.

Among 27 Canadian universities, Concordia ranked 22nd. The 2018 results were based on 2015-16 data. Concordia placed above the median score of all participating institutions in both research and international outlook.

The research score accounts for 30 per cent of the World University Rankings. It looks at papers and research income per academic staff, as well as research reputation.

The teaching score has a weighting of 30 per cent as well, and considers the learning environment, such as academic reputation, student/academic staff ratios and doctoral degrees awarded.

Citation impact also counts for 30 per cent, while industry income, which looks at how much research income an institution earns from industry, is worth 2.5 per cent.

International outlook, which accounts for 7.5 per cent of the score, includes the proportion of international staff, students and collaboration at a university. Concordia finished 10th among Canadian institutions in this indicator.

“Concordia is consistently recognized for its diverse and international faculty and students, which is something we can all take pride in,” Carr adds.

Success in rankings by subject

Not only did Concordia maintain its position in the 301-400 group in social sciences, the university also made the cut in business and economics, where it finished in the 301-400 category, as well as in education, where it ranked in the 101-125 level. This year marks the first time Concordia placed in the latter two categories.

Rankings for other subject areas, including arts and humanities, sciences and engineering, will become available over the next month.

The MSc in Marketing shared first place in Canada with HEC Montreal in the latest Quacquarelli Symonds (QS) ranking.

QS used five indicators to assess the programs: employability; alumni outcomes; value for money; thought leadership; and class and faculty diversity. The Concordia program stood out in the value for money category.

JMSB’s MSc in Management also scored well in value for money, while the MSc in Finance was recognized as one of the most diverse programs of its type.

“Having strong, specialized master’s programs, which yield solid research contributions from our graduate students, has been an important factor in our steadily rising research profile,” says Anne-Marie Croteau, dean of the JMSB.

The QS 2019 Global MBA Rankings placed John Molson MBA eighth in Canada. The program, which is celebrating its 50th anniversary, was found to be among the country’s most diverse and one of the best returns on investment.

The Economist's 2018 ranking of full-time MBA programs, released October 25, placed the John Molson MBA first in Quebec, as well as 94th in the world.

Earlier in 2018, The Economist rated Concordia’s John Molson EMBA program second in Canada and 64th in the world in its Which MBA? Executive MBA Ranking.

The Economist surveyed about 8,000 international business schools along with current students and alumni from the past three graduating classes.

“A positive EMBA experience depends heavily on the strength of the cohort and we have been attracting some of the province’s best and brightest executives and entrepreneurs,” says Croteau.

The second place result matches Eduniversal’s 2018 Best Masters ranking. Eduniversal rated the John Molson EMBA 11th in North America and ranked the MSc and CPA programs among the top on the continent.