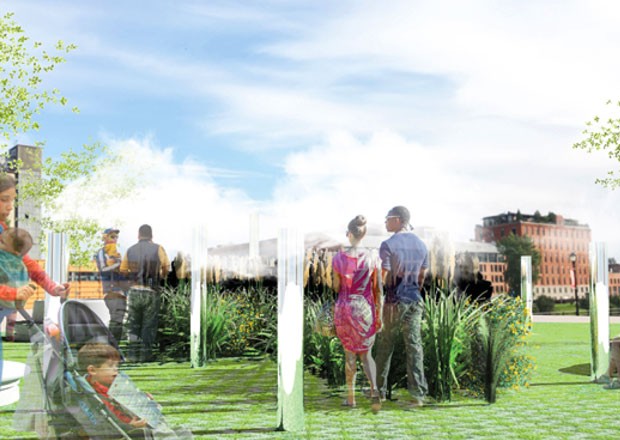 For more than a year, Concordia fine arts students have been competing to create an art installation, destined for the heart of Montreal's Griffintown.

The inaugural Legado Public Art Competition involved 17 students on seven teams. Three teams made it to the final round, and the winning project was announced on March 19.

Annabelle Daoust (Design) and Fany Rodrigue (Studio Arts) won for their artwork "Misty Valley". It will be given a prominent place in a new urban redevelopment project.

Rodrigue says the experience was challenging both intellectually and creatively.

“I am super happy to know that this project will be realized and be permanent,” she says. “We thought at the beginning that we had a good idea. I believed in the project and we pushed it to another level.”

Her goal was to have Concordia students design a public art installation for a gathering space in the Legado project — a sustainable development in the Griffintown neighbourhood.

Voland, who sat on the jury in both rounds of the competition, was looking for an art installation that both reflected the history of the neighbourhood and would fit well in the common space at Legado.

“Misty Valley,” a piece deeply rooted in the industrial history of the Lachine Canal, did just that, she says.

“Their progression from the beginning of the competition until now was substantial. We loved the historical idea behind it, the storytelling and how detail oriented they were about its execution. It spoke to where we used to be and where we want to go. The name Legado stands for just that: What is our legacy?”

The three teams made it to the finals last October. Since then, they have been developing and refining their proposals, working with GI Quo Vadis and the Legado team to iron out technical issues, health and safety concerns and the materials to be used.

Central to the design of “Misty Valley” are 13 chrome chimneys that will pipe steam into the air — a reference to the canal’s infamous former nickname, “Smokey Valley.” The steam will be generated from rainwater gathered from the Legado buildings.

The installation is designed to provoke a public dialogue about energy use, Montreal history and future sustainable urban practices.

Solving the problem of the mist system was critical, Rodrigue explains. She contacted three suppliers to work out the details. One loved their plan and wanted to be part of it so much that he gave them a substantial discount.

“That made me think that I was onto something,” says Rodrique. “His price helped us build our true vision. This gave us all the freedom and flexibility to play and to ask, what can I do with this?”

“Misty Valley” was awarded $5,000 and the opportunity for Daoust and Rodrigue to construct their proposed installation on site with the support of GI Quo Vadis.

The competition was supported by the Institute for Urban Futures, an initiative housed within Concordia’s Faculty of Fine Arts. The Institute is designed, among other things, to shepherd projects taking place both in and outside the classroom that connect faculty and students to community initiatives.

Paul Holmquist, the Institute’s project manager, has been managing the Legado competition since its inception. He says it challenged students to create public art that fits within the rich social, cultural and historic context of Griffintown.

“This has been a fantastic opportunity for the students to work with leading professionals in the field, and to up their game by engaging head-on with the vital role that public art can play in sustainable development projects,” says Holmquist. 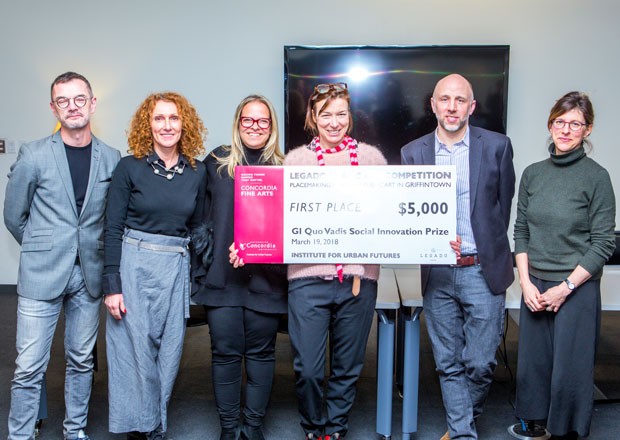 Even though their installation will be the final part of the Legado development to be built, Daoust and Rodrigue will be sitting down soon with engineers and landscape architects on the Legado team.

“We are in the final stages of construction drawings, which is why we need to get them on board now,” says Voland. “There are major conversations to be had.”

Artists are usually asked to come in at the final stage, but Voland says she brought them in at the very beginning of the development project to help address community demands for more public spaces in Griffintown.

“I see art as a connection piece. It’s about bringing people back into the design process. It’s about getting people engaged from the outside in. We thought public art would do that and we feel very strongly that Concordia has one of the strongest art programs in Montreal.”

This is the first time the Quo Vadis Social Innovation Prize has been awarded at Concordia. Quo Vadis has also given funding for two additional prizes to be awarded to projects at the university.

“This is a huge first step in our relationship with Quo Vadis,” says Rebecca Duclos, dean of the Faculty of Fine Arts.

“We’re keen to continue working on these embedded curriculum projects with Quo Vadis, and to see how, through beautiful partnership experiences like this one, our students can help envision a better community for all of us.”