Catch up with Concordia's varsity soccer, rugby and football teams as they approach the playoffs
|
By Kenneth Gibson 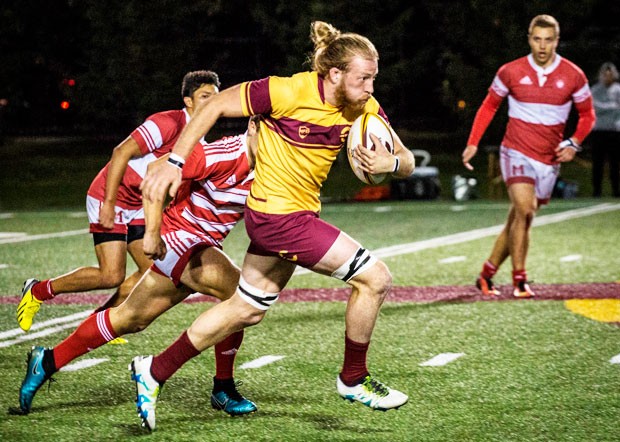 All photos by Brianna Thicke

UPDATED THURSDAY, OCTOBER 5: The Stingers football team's next game — scheduled for this Thursday, October 5, against the Université de Montréal Carabins — has been cancelled because of an illness among the UdeM players. Concordia faces McGill at Percival Molson Memorial Stadium, on Saturday, October 14, at 2 p.m.

The Stingers men’s rugby team is on fire this season, boasting a 4-0 win-loss record since beating McGill 38-10 on September 10. A week later, they defeated École de technologie supérieure (ETS) 36-12.

Winger Jean-Christophe Vinette was named Stingers athlete of the week for the period ending Sunday, September 24, after distinguishing himself in a 44-28 victory over Sherbrooke that same day. Vinette made many tackles and scored an important try to put the game to bed for the Stingers.

They went on to beat McGill 28-20 on Friday, September 29, and the team hopes to keep the winning streak going when they take on the Carabins at Université de Montréal on October 6.

Catch the men’s rugby team in action at home on Friday, October 13, at 7 p.m. against Bishop’s University.

The Concordia women’s rugby team is also having a solid season, with a win-loss record of 3-2, including a massive 85-0 victory on McGill’s home turf in the first game of the season. They also roundly defeated the Carleton Ravens 91-7 in the Stingers’ home opener.

Concordia women’s rugby players have been given Stingers athlete of the week honours twice this season. Jenna Thompson was awarded the title following the victory over McGill, in which she scored four tries and was named MVP. Laetitia Royer got it after the win over Carleton, when she scored three tries and was also named MVP.

The team faces Université de Montreal at home on Friday, October 6, in the Kelly-Anne Drummond Cup. The annual tribute to a former Stinger who died tragically is an opportunity to raise awareness around the issue of domestic violence.

Catch the women's rugby team in action at home on Friday, October 6, at 7 p.m. 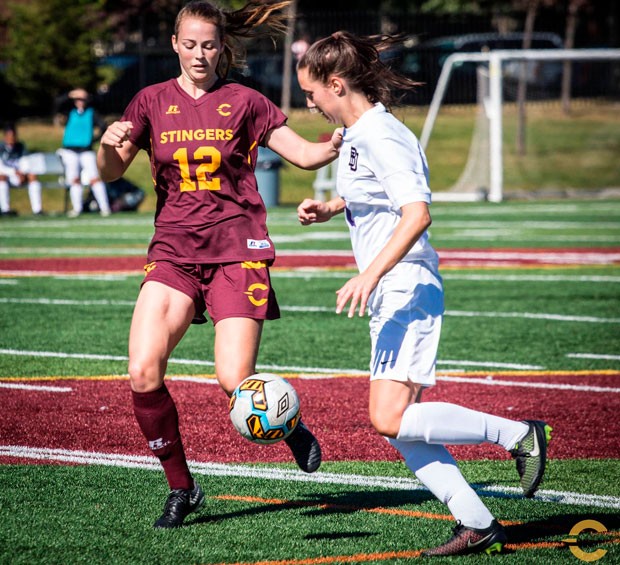 The women’s soccer team sits in third place in their eight-team RSEQ conference and has a 2-3-3 win-loss-tie record for the season.

On Sunday, September 24, they beat the McGill Martlets for the first time in five years in a 1-0 victory. One week later, after a tough loss to Sherbrooke, they defeated the Bishop’s University Gaiters 3-0.

Chama Sedki has been named athlete of the week twice this season and is tied with Sarah Humes for most points on the team. Concordia's next game is at UQAM on October 13.

Catch the Stingers women’s soccer team in action at home on Sunday, October 15, at 3:30 p.m. against Université de Montréal.

The men’s soccer team is sitting in second-to-last place in the Réseau du sport étudiant du Québec (RSEQ) standings after posting a win-loss record of 1-5 so far this season. They picked up their first victory Friday night, beating Sherbrooke 1-0.

The team has a combined five goals in six games. Their next match is against Université de Québec à Montreal on Friday, October 13.

Catch the men’s soccer team in action at home on Sunday, October 15, at 1 p.m. 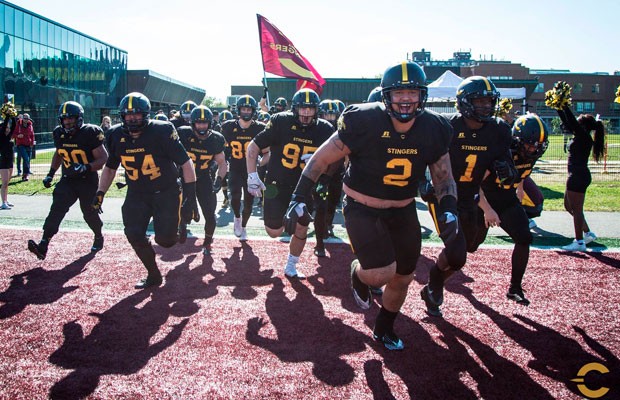 Stingers quarterback Adam Vance made his first Canadian university football start on Saturday, September 30 against the Sherbrooke Vert et Or in the 31st annual Shrine Bowl. The event raises money each year for the Shriners Hospital for Children.

The Stingers headed into the Shrine Bowl with a 2-2 win-loss record, after a disappointing 12-8 loss to Laval on September 24.

Despite a strong effort and outstanding performances by defensive tackle Wade Leeroy Cyr and wide receiver Jarryd Taylor, the Stingers lost the fifth game of their eight-game season 30-13. Cyr completed nine tackles and one assist during the game, while Taylor caught eight passes for 108 yards.

After beginning the season with a 37-19 defeat at the hands of the Université de Montréal Carabins, the Stingers rebounded with wins against Sherbrooke and McGill. The homecoming 68-16 victory against their crosstown rivals was particularly decisive.

During that game, Miller set a school record with six touchdown passes. Concordia running back Jean-Guy Rimpel leads the conference with 483 rushing yards.

The Stingers’ next game — scheduled for this Thursday, October 5 against the Carabins — has been cancelled because of an illness among the UdeM players. Concordia faces McGill at Percival Molson Memorial Stadium, on Saturday, October 14, at 2 p.m.

Catch the Stingers at home in their final game of the regular season at 7 p.m. on Friday, October 27, against Laval.

Check out the Concordia Stingers’ website for more schedules, stats and game video!