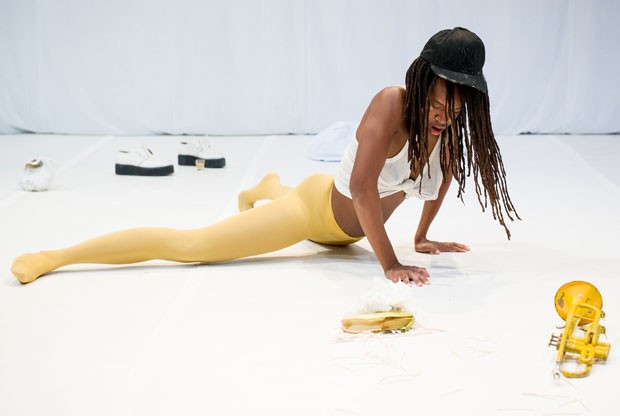 Dana Michel: “Concordia laid the groundwork for what I do today.” | Photo by Ian Douglas

Dana Michel (BFA 06) developed her latest show in dance capitals around the world — New York, Vienna, Paris and Montreal — but she’d never danced in Venice. This week, she travelled there to attend the Biennale Danza 2017, an international contemporary dance festival.

Upon arrival, she received a prestigious award, the Silver Lion, and performed a new work, STAHVIN MAHVIN, as well as her celebrated Yellow Towel solo show. The Silver Lion recognizes innovation in dance. The festival calls Michel “one of the most original figures now capturing the attention of the international press.”

For her part, the dancer says performing in Venice was “already a gigantic honour, as is winning this lion.”

Michel received the news of her award back in March from Canadian choreographer Marie Chouinard, dance director for the Venice Biennale. “She is a child, a philosopher with no words,” Chouinard says of Michel.

“She is a creator, she is a precious phenomenon of very serious humour. With total confidence and in a state of unusual peace, she reconstructs the raw and complex experience of simply being.”

The Concordia alumna had an unusual path to success in the contemporary dance world. She ran track and played touch football in high school, studied marketing and pursued a career as an events planner. Then at 25, she made the dramatic decision to study contemporary dance.

On the eve of her awards ceremony, Michel opened up about her art and the impact of Concordia on her life.

‘I let myself be guided by intuition’

How did you come to Concordia?

By fluke — I saw an ad in the paper. I had moved to Montreal a couple years before I started at Concordia. Somewhere the bug was there, vaguely, but it was a convergence of being in the job I was at, realizing it didn’t make any sense and going to a lot of raves. Upon seeing this ad, the idea gelled.

Is going into dance at 25 considered a late career move?

Yeah, it is considered late, especially for a cis woman. The great thing about Concordia is that it’s kind of like a place for misfits. That’s a really wonderful thing because it allows people like me to be able to explore something that seems like an impossible idea.

Reviews often mention your incredible energy. Where does it come from?

We all have our vital life forces and I guess mine is just hanging out on the surface of my person with a lot of ease. I am very sensitive and expressive. The first answer that jumps to my mind is my family. They put everything into perspective. We are a family of women who are very sensitive and expressive. We’re all performers — I am just the first to take this juice we all have and use it in a different way.

What else do you absorb into your dance?

The way I work is really not pointed. I’m working with all kinds of inputs. Generally, I have a solid subject matter at the start and I let it diffuse as much as it needs to. So that means my everyday experience as a human being is distilled somehow back into the subject. I let myself be guided by intuition, actively absorb my environment and spit it back out into my work.

Do you add and change things as you work?

In a way, I am always building. À la base, I use personal experience to build all my work. Obviously, I have changed over the last 10 to 15 years. But I am still me, so there is a similar thread. I always talk about the idea of tie-dye — a kind of gentle gradation of colour change. My ideas are constantly bleeding into one another.

In Yellow Towel, you say you are exploring your racial identity. Can you elaborate?

I am speaking about things that I have never spoken about. I don’t have a goal necessarily. There’s no end point. I am reflecting, uncovering things and making connections. It’s a constant process of discovery and a new kind of conversation, with myself or with other people. That wasn’t the goal, but that’s what happened and I am really grateful.

It’s scary. I have always been in my bubble and that offers a kind of protection. But it’s also a limitation, so I am happier to be outside of it.

You performed this piece in so many major dance centres around the world. Are you better known now internationally than at home?

Yeah, definitely. To some degree, it’s understandable. In 2011, I was feeling that I needed to move to Europe because I had more in common with the conversation that was happening around contemporary performance there.

It’s not for lack of wanting to perform here, especially because the work I do is so much about ingesting my environment. I think it’s sad to not expect a Canadian public to be able to handle this kind of work. Education, in part, comes from exposure and from taking a chance that people will be able to deal with it or be uncomfortable.

Why do you think Canadians are wary of your work?

Maybe they think it’s a little too f—king wild, but I don’t think so. I remember the premiere of Yellow Towel and a lot of people were freaking out and walking out. But then there were a few teenagers in the audience who were completely down!

People get scared. It’s very human. They tend to want to recognize and understand and they want to be able to name. The older we get, the more of a tendency we have to do that. A younger audience sometimes has more freedom. There’s something about connecting to the essence of something without being so worried about feeling lost. They let it float over them the way it needs to.

Finally, what stands out about your time at Concordia?

I can easily say that going to Concordia is one of the most important things that’s happened to me.

I just picked up a phone and called the Department of Contemporary Dance. The chair, Silvy Panet-Raymond, spoke to me as though it was completely normal that I should be asking to come for an audition as a person with no dance experience. In a way, it was an absurd conversation, but she had it with me with no judgment and that was a pivotal moment in my life.

The kind of support I got from Silvy changed my person and the way that I look at everything. I am convinced it has allowed me to make the kind of work that I do.

The teaching at Concordia was so blown open and on its side and open-ended that I had space to make up my own rules. For some people, that blows up in their face, but for me, it laid the groundwork for what I do today.