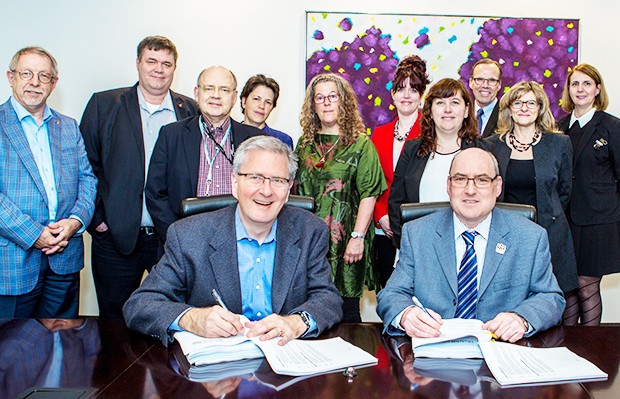 On May 26, representatives from the Concordia University Union of Support Staff - Technical Sector (CUUSS-TS) and the university met to sign their new agreement.

The president of CUUSS-TS, Alex Macpherson, expressed his satisfaction in reaching the agreement so quickly. “This is the fastest we have ever been able to conclude negotiations in recent memory,” he said. “I attribute this to a commitment from both parties to a non-confrontational, problem-solving approach to negotiations and to a willingness to reach a fair agreement.

Macpherson personally thanked the members of both committees for all their effort. “I’m happy that negotiations have concluded and feel the technicians will be pleased with the new provisions of the Collective Agreement.”

Roger Côté, vice-president of Services, also congratulated both the university and CUUSS-TS teams.

“This agreement is a testament to the positive contributions of both parties to the constructive working relationship we enjoyed during the negotiation process, and that will pave the way for our future meetings,” he said.

The agreement was approved by the CUUSS-TS membership and the university’s Board of Governors. It will be posted on the Concordia web pages shortly.