The future of synthetic biology

From new medicines to more effective mosquito repellent, this group of Concordia grad students wants to engage the public with their research
|
By Amanda Clarke 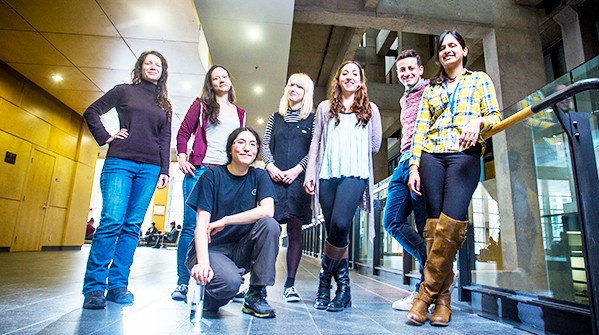 Are you curious about how fungus microbes could replace fossil fuels? Or how cancer genes could be removed? A group of graduate students from the Faculty of Engineering and Computer Science (ENCS) and the Faculty of Arts and Science at Concordia have some answers for you.

Through a SSHRC Insight Grant, professors Matthew Harsh and Brandiff Caron (Centre for Engineering in Society), David Secko (Department of Journalism) and Vince Martin (Department of Biology) are teaching the next generation of synthetic biologists how to engage with the public about the benefits and risks of their work.

According to Harsh, it’s a vital time for such engagement. “With the intersections between science, politics and society making headlines every day, it is more important than ever for scientists and engineers to learn how they can make their work visible,” he says.

“We have designed interactive activities that will be included in several upcoming events to facilitate rich dialogue and deliberation between the future practitioners of synthetic biology and public stakeholders,” he says.

As Mindy Melgar Segal, an MA student in synthetic biology explains, the group is primarily working to get ordinary, harmless microbes to produce things they normally wouldn’t, for use in biofuels, medications and even food.

“By tinkering with the metabolism of the microbes we can design safe, sustainable and cost-effective alternatives for the production of products currently made with harmful chemicals,” she says.

As the synthetic biology experts prepare their upcoming presentations, they agreed to discuss their findings and the challenges of their research.

“Did you know that catnip can also be used as a mosquito repellent? The active ingredient in catnip has been suggested to be 10 times more effective at repelling mosquitos than DEET, which is great because mosquitos are becoming more resistant to DEET.

This compound is found naturally in plants. However, it currently requires a lot of land and resources to grow, harvest and extract. My project focuses on alleviating these problems by getting yeast to produce this compound, which will use fewer resources and reduce the amount of plant waste.”

“I aim to produce the active ingredients of cannabis using yeast. We intend to create standardized clinical trial-validated medicines from cannabis to help the billions of people suffering from chronic pain and other diseases live normal lives.

We genetically engineer yeast to make it produce high quantities of pure cannabinoids that are necessary for further medical research and development.”

“The next cure for cancer might be somewhere in the Amazon rainforest, but if the plant that makes it is extremely rare, there won’t be enough of the compound available to actually sell as a medicine.

There are tens of thousands of compounds, many of them produced by plants, that are currently too rare to even study, much less develop into therapies. My goal is to scale up the production of a subset of these rare compounds so they can be made available for research.

We take the plant’s instructions for making these compounds and place them into brewer’s yeast. Then, instead of making alcohol, the yeast makes the rare compound.

There are two major challenges: first, scientists have to unravel how plants actually make these compounds, and second, the yeast must be genetically engineered to make as much of the compound as possible.

I’m involved primarily with the second part. It’s a big puzzle, which is fun to solve, and it’s also rewarding to think that a new medicine could be discovered thanks to my work.”

“I strive to find the coordinates of certain suspects – genes – thought to be involved in cancer pathways and systematically eliminate those by genome editing.

Specifically, my project aims to bridge the gap between engineering and biology in an attempt to automate gene editing for rapid and routine identification of genes involved in cancer.”

“In synthetic biology, we try to make microorganisms like yeast and bacteria produce valuable materials, like biofuels, pharmaceuticals or substances produced by plants.

Doing this ensures the renewable and sustainable production of these substances. The problem, however, is that we are producing them in very small amounts, which makes these methods not competitive enough to replace the old-fashioned methods used make them.

I am developing tools to improve the efficiency of producing a substance used in plastics, which is currently produced, unsustainably, from petrochemicals.”

Logan Robeck: a petroleum replacement made from plant-based fungus

“My research centres on trying to get a green, easily renewable plant-based fungus, Aspergillus terreus, to produce more of a compound called itaconic acid. This acid could replace petroleum in many consumer products, including plastics, paints and coatings for fabrics and paper.

“For such industrial applications, about 50,000 tons of itaconic acid would be needed. My research is about ‘deleting,’ or turning off, genes that prevent Aspergillus terreus from producing as much itaconic acid as it could.”

Check out the Eureka Festival, where the team will be presenting, or sign up to volunteer for the festival (form is in French).