JMSB undergrad Émilie Leduc and her fellow Concordia volunteers are sleeping outside for charity. Join the last leg of their 2017 campaign!
|
By Yuri Mytko and Émilie Leduc 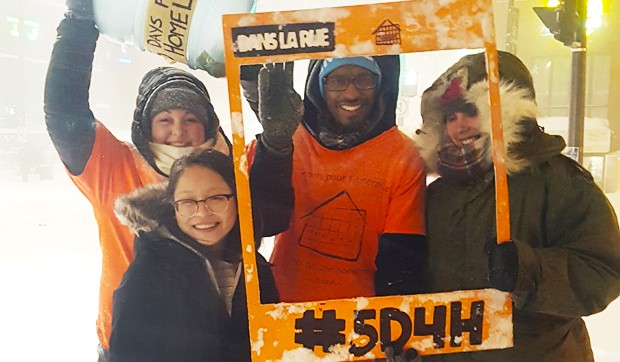 Since March 12, as many as 20 Concordia students and other community members have joined a committed crew of six volunteers sleeping on the streets in support of 5 Days for the Homeless.

The event is organized by the Commerce and Administration Students’ Association (CASA) of the John Molson School of Business (JMSB) as part of a nationwide awareness initiative.

This marks the 10th consecutive year that the university has participated. Josh Redler (BComm 08) brought the campaign here in 2007.

"Montrealers from all walks of life made sure we were fed and cared for with kindness and donations. We raised $42,000 that year," Redler reports.

In 2017, the national campaign hopes to raise $250,000 to support different community organizations. Twenty-two schools are participating. Proceeds from the Concordia effort will benefit Montreal organizations Dans La Rue, which helps at-risk teens, and Chez Doris, a day shelter for women.

‘This experience will change you’

Émilie Leduc, a human resources major at JMSB and an executive VP at CASA, has been sleeping on the street since Sunday.

I am often met with shock when I talk to people about 5 Days for the Homeless. People cannot seem to wrap their heads around why we would choose to sleep outside during the winter.

Before participating in the campaign last year, the night was my greatest worry. Will I be safe? Will I be warm? Little did I know I would face much harder obstacles throughout the week.

As I arrived at the corner of Mackay and De Maisonneuve, sleeping bag in hand, I looked at what would be my bedroom for the next five days. I took a deep breath, grabbed a tin can, and began asking people for donations.

Some passed by staring, some stopped to donate or to ask us what we were doing, and many just walked right by. I very quickly realized that being overlooked and ignored would be the greatest challenge. It’s so easy to underestimate the impact of human interaction.

No matter your economic or housing situation, you remain the same as anyone else — a human, a citizen of the world. Taking a moment to smile and acknowledge someone as you walk by comes at no cost to you but can mean everything to them.

I encourage everyone to come by and participate, whether it be during the day or to spend a night. This experience will change you. It is incredibly humbling to be so dependent on the generosity of others. It’s a feeling I will cherish forever.