From March 10 to 12 at Concordia, savvy undergrads square off at Les Jeux de la traduction
|
By Christian Durand 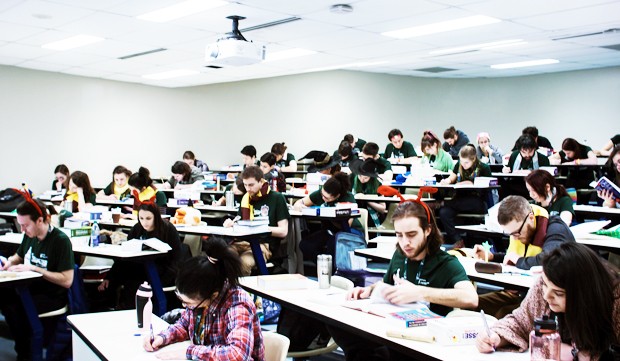 Christine York: “A translator must do justice to the authors they’re interpreting.” | Photo by Jacques Boivin

What does it take to be a winning translator?

“The words have to be lively and engaging with an understanding of the original context in order to appeal to a targeted audience,” says Christine York, lecturer in translation with the Département d'études françaises.

From March 10 to 12, Concordia will host the best and brightest Canadian translation students for the 2017 Jeux de la traduction.

Hundreds of undergraduates from 12 teams representing universities across the country will put their language-swapping prowess to the test. The gruelling weekend will challenge their speed, rigour and imagination.

According to York, participants will deal with materials that only human translators can adequately interpret.

For example, teams will have to translate excerpts from songs and audiovisual material that uses "plays on words" and colloquial expressions. They will also be asked to translate materials that have constraints — such as 140-character tweets.

All events will be timed and judged on additional criteria such as creativity, spelling and grammar.

“Quick turnaround of material is a constant reality in the world of translation, so speed is important,” York explains.

“But a translator has the responsibility to the authors and characters they are interpreting to do justice to their work, so this is also heavily weighed.”

Translations are judged anonymously by a committee made up of professors from each university represented at the games. The 12 competing schools are hosts to Canada’s only undergraduate-level translation programs.

Teamwork is the key to success at the Jeux de la traduction, where groups compete, eat and board together for the duration of the games.

Translation student Caeli Martineau was part of Concordia’s winning team at l'Université du Québec à Trois-Rivières in 2016 and is returning this year.

“Teams can bounce ideas off each other, gain new perspectives and use combined knowledge and skills to come up with translations that exceed what anyone could have done alone,” Martineau says.

“Translators in professional settings often work together, so incorporating this in the games is a great way to prepare us for what's to come.”

Another major benefit of competing is that participants create networks with future translators from other universities as well as with industry representatives.

For Martineau, this is crucial for future success.

“The more people you know in a field, the better your chances are at finding a great translation contract or job down the line.”

Check out a Team Concordia presentation from the 2016 games: