From the battlefield to the boardroom 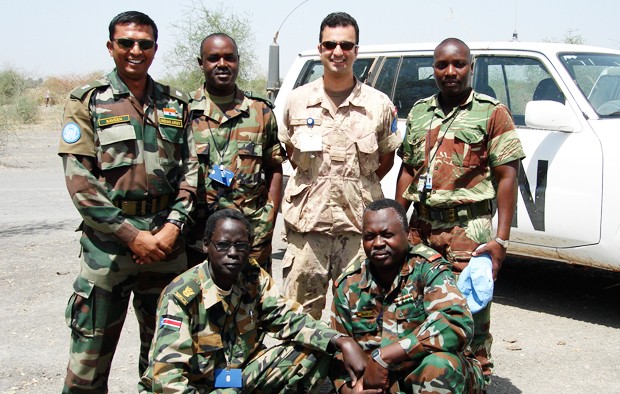 Major Daniel Doran with Sudanese soldiers during one of his missions.

Leadership — like life — is a journey, not a destination. Concordia graduate Maj. Daniel Doran, MBA 16, knows this better than most.

After receiving a civil engineering degree from the Royal Military College, he embarked on a career with the Canadian Armed Forces, which took him as far as Afghanistan and Sudan.

Doran spent 12 years as a soldier with the army’s regular forces before leaving to become a reservist with Montreal’s 34 Combat Engineer Regiment.

Like hundreds of his peers across the country, Doran now works for the military part-time while holding down a full-time civilian job. The transition from exclusive military service brought with it interesting lessons that came to shape his current vision of leadership.

His journey eventually brought him to the John Molson School of Business (JMSB), where he enrolled in the MBA program.

“When you walk into a room wearing your uniform, you’re wearing your CV,” says Doran, who has been working as associate director of project management at McGill University since 2011.

But it’s not the same in the civilian work world. In fact, after transitioning out of full-time service, it soon became apparent to Doran that he would have to approach a lot of things differently.

“For example, there is no human resources department between you and your people in the army. They are your people — mind, body and soul. And as an officer, it is your job to take care of them and know what’s going on with them at home, in their heads, and so forth.”

Doran says his employees at McGill tend to be more guarded about their personal lives. As a result, he had to adjust his leadership style; using others skills to connect and build trust.

A conviction that leaders must never settle, or think they have all the answers, is what motivated Doran pursue his MBA. He chose JMSB for several reasons, including the university’s diversity.

“It’s like going to school at the United Nations,” he says.

The internationality Doran encountered at JMSB reinforced the importance of seeing things from multiple angles. Now, when he’s building a team, he looks to hire people that bring different perspectives to the table. Some of his employees have backgrounds in civil engineering, others in artistic design and even film.

Upon completing his MBA in 2016, Doran joined the Concordia University Alumni Association’s board of directors. He says getting involved in organizations outside of work is a great way to stay on your toes, network and learn.

What’s the most important trait to have in any professional field? Doran argues you have a lot to gain from being authentic.

“To be successful, leaders have to make people feel like they have some skin in the game.”

It’s also important to look after those individuals working for you, he says, adding that he finds inspiration in the words of Virgin Group founder Sir Richard Branson:

Looking to hone your leadership skills? Learn more about the John Molson MBA program at Concordia.