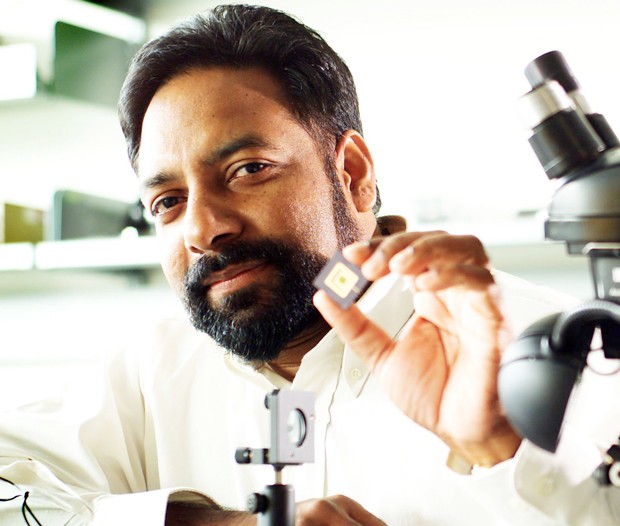 Muthukumaran Packirisamy, a professor in Concordia’s Department of Mechanical and Industrial Engineering, has devoted much of his career to working with microsystems and microelectromechanical system (MEMS) technologies.

“I still apply all the fundamentals of mechanical engineering; I’m just looking at it through a microscope,” he says.

One of the first people to receive a PhD in the now rapidly developing area, Packirisamy researches miniaturized devices to reduce a laboratory’s worth of equipment onto an instrument that’s about the size of a USB key.

The applications for such microsystems research are endless. His groundbreaking work on the “lab-on-a-chip,” a bio-microsystem made up of many tiny elements, allows people to do at-home blood testing, for example.

Packirisamy's current aim is to improve data traffic in telecommunications.

He will use MEMS technologies to reduce the size and improve the performance of network components, making them smaller, lighter and cheaper. Ultimately, the research has the potential to increase data traffic and security, while reducing the space and cost that networks usually require.

Packirisamy says “shrinking the world — miniaturizing physics, chemistry and biology” is at the centre of all his research.

‘Bringing hospitals to where people live’

Last year, Packirisamy’s miniaturization of diagnostic tools used in health care to detect illnesses lurking in a person’s bloodstream earned him a top honour in Canada — membership in the Royal Society of Canada’s College of New Scholars, Artists and Scientists.

“My technology will eventually be useful in bringing hospitals to homes.”

The size and relatively low cost of creating this technology means that it can be used in rural areas or field hospitals to do quick on-site testing and disposed of afterwards to avoid contamination.

The engineering professor is also looking beyond diagnostic tools to motion sensors that could potentially be used in seniors’ residences to detect falls, as well as other devices to capture biological data or fluids that could then be sent to a doctor for analysis.

For Packirisamy, the goal of his research is twofold: empowering people to take responsibility for their own health and reducing the load on the medical system.

His research also has an application in the fight against cancer. He and graduate students at the Optical-Bio Microsystems Laboratory and Concordia Silicon Microfabrication (ConSim) facility, have shown that using a microtechnology made up of nanomaterial is an influential diagnostic tool.

“Sometimes cancer cells don’t want to come near nanomaterial, so I can catch them, trap them and take them out.”

By isolating cancer cells through these microsystems, biologists will be able to study the cells’ changes and responses, thereby improving early detection and treatment options.