The significance of salamanders

Following the discovery of three new species, Concordia biology professor Grant Brown explains how these amphibians serve as a barometer for ecosystem health
|
By Cléa Desjardins 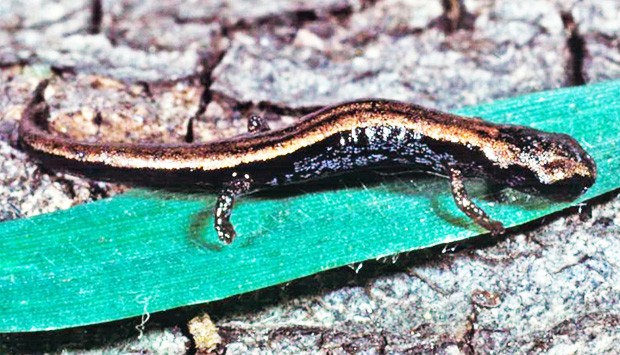 A juvenile salamnder of the species Thorius narisovalis on a blade of grass. | Photo by James Hanken

Salamanders: even more interesting than Newt Scamander? Emphatically so — if you’re biology researcher Grant Brown, that is. On the heels of last week’s discovery of three new species of nearly extinct salamander, the Faculty of Arts and Science professor tells us more about these environmental wizards of the amphibian world.

What makes salamanders so special?

Grant Brown: Salamanders are particularly interesting because of their trophic position within food webs.  They are prey to a variety of species — birds, mammals and snakes, for example — and are predators on many others, like tadpoles, aquatic invertebrates, some fish and terrestrial invertebrates.

Given their role as both predator and prey, they are often used as an indicator of ecosystem health. Anything that disturbs their prey or their predators will be reflected by the salamander population.

Why are salamanders particularly good indicators of environmental shifts?

GB: Salamanders are often considered the “canary in the coal mine” because they are susceptible to small changes in habitat quality. A slight drop in ambient water: they die. A slight increase in acidity in breeding ponds: they die.

Any animal that has a relatively short life span can be considered an indicator as subtle changes in the environmental quality will be more easily spotted. You can’t wait around to see how small changes affect long-living species.

What's the significance of the discovery of three new species of salamander?

How often are new species found?

GB: With modern molecular phylogenetic tools, new species are described frequently. However, the rate of species loss is more troubling. We are losing them faster than we can describe them!

How does your research involve salamanders?

GB: My collaborative research uses salamanders as model predators and wood frog tadpoles as prey species. We are examining the role ecological uncertainty plays in shaping the cognitive ecology of prey and predators. This is a key “missing piece” in our understanding of ecosystem sustainability, made even more important as climate change, invasive species and habitat degradation are all thought to increase the uncertainty.