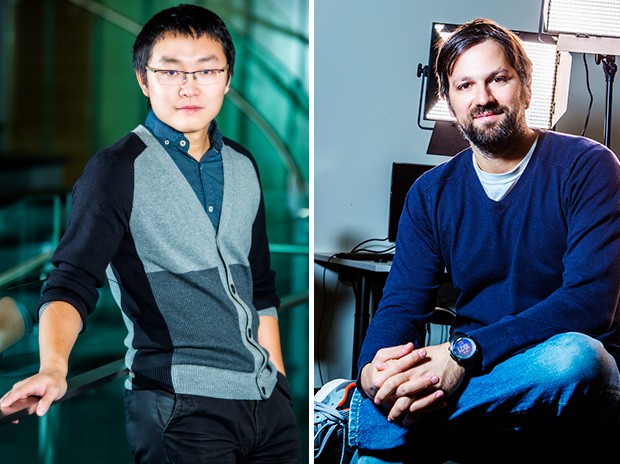 Concordia’s Department of Computer Science and Software Engineering (CSSE) is one of the oldest and largest of its kind in Canada, and it offers a vast array of programs and research facilities.

Last year, to boost its research and teaching capacity even more, the CSSE welcomed Charalambos Poullis and Weiyi Shang into its professoriate.

Sudhir Mudur, chair of the CSSE, says he was impressed with Poullis’s publications in top journals, as well as the popular software libraries he developed.

“He also brings considerable experience in multidisciplinary work with artists, designers and scholars.”

Meanwhile, Shang’s early research findings and prototypes have been published in flagship venues and are adopted by practitioners on a daily basis.

“He has considerable experience in working with the industry and brings his knowledge of creating software tools of immediate relevance,” Mudur says.

Charalambos Poullis: ‘The department is definitely at the forefront’

While studying for his Master’s in Computer Science at the University of California that Charalambos Poullis saw how computer vision and graphics were being used in the Los Angeles film and game industry.

His experience in the golden state inspired Poullis to pursue a career in academia in order to study the ever-expanding boundaries of new graphics technologies.

Poullis then became an assistant professor at the Cyprus University of Technology before making the jump to Concordia in August 2015.

“I was immediately welcomed into the Concordia family,” says Poullis.

“The first year has been very busy, especially with the development of a new course in computer vision, the revamping of other courses and various grant applications. Overall, apart from the winter weather, it has been very pleasant.”

The associate professor teaches courses on computer games and virtual worlds. He is also the director of Concordia’s Immersive and Creative Technologies lab, where he works alongside students to conduct research in the areas of computer vision, computer graphics and virtual reality.

“After seeing the recent advancements Concordia’s faculty and students have achieved, I was impressed and decided I wanted to be part of it,” Poullis says.

“I wanted to contribute to this effort because I share the same philosophy for excellence in research and innovation.”

Poullis was particularly attracted by the CSSE’s excellent research results which are highly cited and have generated several awards.

“Moreover, in terms of teaching, the department is definitely at the forefront, especially with the early introduction of innovative study programs such as the one in computer games.”

Weiyi Shang: ‘I had an amazing first year’

One of the CSSE’s emerging stars, Weiyi Shang began his professorship at Concordia only last year.

His research into the world of software engineering has already earned him funding through both the Natural Science and Engineering Research Council of Canada Discovery Grant and the Microsoft Azure for Research Award.

“I had an amazing first year at Concordia, and was able to supervise students, collaborate with others in the department and secure funds,” says Shang.

“Concordia’s CSSE department and its Faculty of Engineering and Computer Science have one of the strongest teams of professors in their area of study. Many of these people are superstars in the world of software engineering. It’s exciting to be able to work side-by-side with them.”

Shang graduated from Queen’s University in 2014 with a PhD in Computer Science. During his studies he received the PhD Research Achievement Award from the School of Computing and the ACM SIGSOFT Distinguished Paper Award.

Beyond his academic accolades, Shang actively integrated his research into practice in the software industry, where he worked for four years as a software performance associate.

Currently, Shang is an assistant professor in the CSSE and teaches at both the undergraduate and graduate levels, in addition to supervising one PhD student and five master's students.

“I hope 10 years from now, when people around the globe talk about software engineering education and research, they think of Concordia as one of the top institutes in the world. And when they think of the professors who made that happen, I hope that my name is on the list.”